Kofta are a popular Middle Eastern dish of ground (minced) meat, ie. lamb, chicken, beef or even pork, which may be shaped into meatballs, patties or loaves. Or sausage shaped and threaded onto skewers and then grilled. It’s the latter that I decided to make and bake off in the oven, as winter in Ontario, Canada is NOT a good time to go outside and fire up your barbecue.

Harissa is a spicy chili pepper paste common to the Middle East (Tunisia) which gives flavour to the blandest of dishes. I recently bought a dry spice blend at Bulk Barn and decided to give some zip to my chicken skewers by adding a generous amount to the meat mixture along with some other spice blends from my pantry. 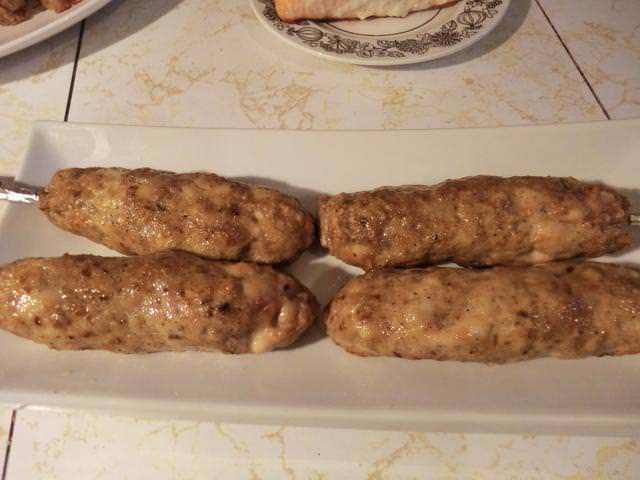 In a food processor add all of the above ingredients and pulse until you get a relatively homogenous mixture with some texture left to the meat.

Divide into four portions and with wet hands, form into 4-4 1/2 inch sausages. Thread onto soaked wooden skewers and place onto a baking sheet lined with a sheet of aluminum foil generously coated with vegetable oil. 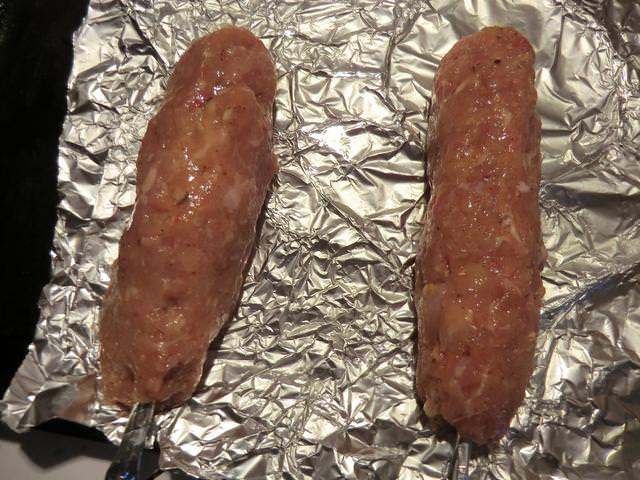 Bake for 20-25 min, turning after 10 minute, until set with some bounce left to the meat. Turn on the broiler and broil for a couple of minutes until lightly browned. 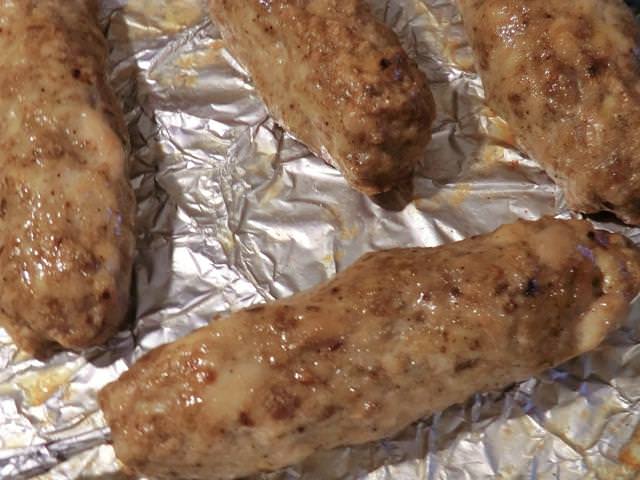 Serve with the starch of your choice … roasted potatoes, rice or couscous as a main dish. 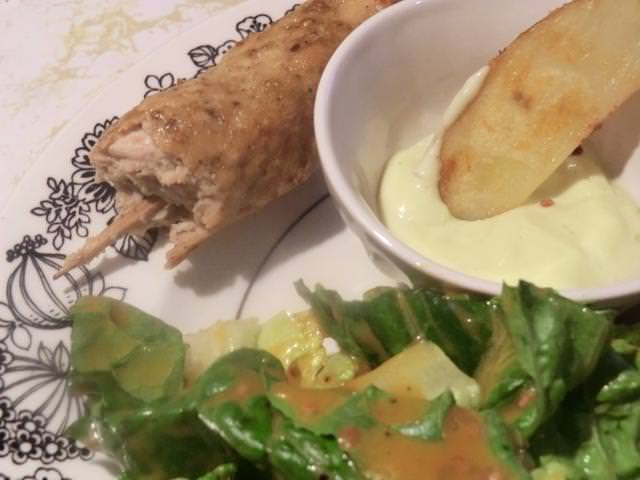 I’ve mentioned my vegi-phobia over the years, so I never thought that I’d make a post about THIS.

I remember my mom dipping cauliflower florettes into seasoned flour and then beaten egg before shallow frying them. I don’t know what they tasted like, cause I never tried them. I HAVE had steamed cauliflower as part of the ‘mixed veg’ on my plate in restaurants, but they were soggy and flavourless. Not exactly something I ever wanted to replicate at home. But I recently ran across a spicy hot ‘vegetarian’ version of Buffalo chicken wings made with cauliflower florettes and couldn’t resist trying it out. It’s just a bit fiddly to prepare but crunchy enough to appeal texturally and with enough spice to satisfy anyone who likes things ‘hot’ hot.

The original recipe had a batter for the cauliflower made up of seasoned flour, milk and water, baked, turned and then basted with a hot sauce/melted butter. In the reviews, someone suggested adding the hot sauce to the batter itself as a substitute for some of the liquid. So that’s what I did. Because the hot sauce is absorbed by the cauliflower, a little hot sauce goes a lot farther without any wasted. The heat sneaks up on you so you may not be aware of it until later. Just a word to the wise.

Buffalo Cauliflower “Wings” – serves 2 as a side dish

Generously oil a baking sheet. Or, if you prefer to cut back on the fat, line the sheet with parchment paper.

Add salt, pepper and spices to the flour. Whisk in the hot sauce and water until you get a smooth batter. You may want to add a bit more water to thin the batter enough to coat the florettes evenly.

Spread the florettes evenly over the baking sheet, one layer thick, and bake for 20-25 min. Turn over each florette and bake for another 20-25 minutes.

Watch carefully as, at the higher temperature, that extra 5 minutes may result in burned bits.

Indian cooking is quite complex. There are regional and religious variations. And, of course, familial preferences. So, when I went searching for a recipe for this dish which combines potatoes (aloo) and cauliflower (gobi), there were endless versions.

The first version I looked at used what many consider the Indian ‘trinity’ of onion, garlic and ginger paste … which is often the base for a wet preparation or masala along with peeled, seeded and diced tomatoes. The second version omitted all three and focussed on toasted whole spices as well as the ground form to give the dish flavour … in what was usually a dry preparation.

Prior preparation of the vegetables also varied. Potatoes and/or the cauliflower were sometimes parboiled or steamed separately until tender before adding them to the saute pan. Personal preference and convenience may dictate the method used.

The recipe below is my novice attempt at aloo gobi along with some variations. If you have leftover steamed cauliflower or baked potatoes, you can save yourself some work and use them instead of cooking everything from scratch.

** I used 1 tbsp mulato/chipotle pepper puree cause I had it around but you might want to just use ground red chile pepper.

NOTE: You can also use a paste made up of garlic (1-2 cloves), ginger (1 tbsp grated) and onion (1/2 medium size) as a base for this dish. For a wet dish, you might want to add a couple of peeled, seeded and diced tomatoes with their juices and a bit of water to make a sort of sauce that you can serve over basmati rice. For a heartier dish, peas and/or carrots may be added along with the cauliflower.

Par-boil the potatoes in a large saucepan of boiling water for 10 minutes. Drain well and set aside.

Heat the oil in a large frying pan over medium heat and fry the cumin and mustard seeds for several minutes, until they begin to burst. Add the green chile (plus garlic, ginger, onion paste and pepper puree, if using) and fry for a few more minutes until the oil starts seeping away from the paste. (You’re drying it out by doing this.)

Add the cauliflower florettes and fry, stirring, for 5 minutes. (I added about 1/4 cup of water and put the lid on at this point so the cauliflower would ‘steam’ cook and not burn.)

Garnish the aloo gobi with coriander and serve with tomato and onion salad and pickle for an Indian menu.

I’ve never had this Szechuan-inspired noodle dish but while surfing the net for something new and inspired to do with a pound of lean ground pork, I ran across this recipe. And it sounded delicious. Best of all, I had all the ingredients or, at least, close substitutions.

So, I cobbled together this recipe using common elements from 3 that I found. The result was well worth the time researching and making the dish. My tummy is full and I’m a happy camper. Even better, the meat sauce is a great make ahead so I only have to cook the noodles and pour the thawed topping over it. A few garnishes and you’re all set.

You may prefer to mix half of your toppings with the noodles and sesame oil in a large bowl and then top with the rest of the meat and garnishes. I’ve served the meat over fettuccine noodles and the rice noodles above. They were both great.

NOTE: You may want to wilt some fresh spinach in a saute pot as well and add it to the noodles for a healthier dish. I don’t have fresh green onions, only frozen in the freezer so I sprinkled several tbsp into the meat and mixed the onions through until they were thawed.

In a large saute pan, over medium-high heat, add the oil. When hot add the ground pork and brown for several minutes, breaking up the pork as much as possible.

Add the grated ginger and cook for another few minutes until the pork is lightly browned.

Add the tahini paste and chicken stock and simmer for 5-7 minutes until the ‘sauce’ is as thick as desired. Taste and add a pinch more sugar if too hot.

Spoon the meat topping over the 4 bowls of noodles and sprinkle green onions on top.

Tonight’s supper was made with pre-made items out of my freezer and pantry and very little time. The results … amazing

Sorry for the less than stellar plating. I was hungry and the food was getting cold.

** You can use mild sausages if you like but the hot version makes your sauce sing with flavour over the polenta.

In a large saute pan, warm up the oil over medium high heat and add the raw Italian sausages. Fry until the sausage is cooked. Drain extra oil if desired.

Add the vodka and stir well until most of the alcohol has cooked off.

Add the rest of the whipping cream and the marinara sauce and mix together until everything is warmed through.

Serve immediately over individual bowls or plates of polenta … or cooked pasta if you like.

Bring the stock and salt to a boil in a medium saucepan, then turn the heat down to a simmer. Take the saucepan off the heat, and whisk in the cornmeal in a fine stream stirring continuously while you do so.

Continue cooking the polenta for 5-7 minutes (depends on how impatient you are to eat) while continuing to stir. Taste for seasoning and add more salt if needed. Serve immediately.

I’ve copied and pasted my LJ post here as a test. If it’s easier for bloggers who read my LJ to read it here and comment, I may continue doing duplicate posts. Thank you FrugalHausfrau for the suggestion.

One of the breasts from my last turkey was sliced into 1/4 inch cutlets and then dipped in a Sriracha based mixture for some of the spiciest oven baked cutlets/tenders I’ve ever had. They were not as crispy as if I’d deep fried them, but I traded a healthier recipe for crunchy texture.

Line a large baking sheet or shallow baking pan with foil and spray with nonstick cooking or baking spray. Or, use parchment paper, in which case you don’t have to use the spray.

Pour the Panko crumbs in a second wide, shallow bowl.

Dip the cutlets in the Sriracha sauce mixture to coat thoroughly, then press the cutlets into the Panko crumbs flipping over to cover both sides. Shake off the excess. Arrange the cutlets in a single layer on the prepared baking sheet.

Bake for 20 minutes, or until cooked through and lightly browned.