Repurposing leftover Sriracha and wasabi mayonnaise can be a challenge, but the results are sometimes pretty amazing.

Sriracha Mayonnaise – Salmon fillet brushed with mayonnaise, pan-seared in a hot cast iron frying pan on the stove for 3-4 minutes, and then finished in a 425 deg F oven. A brief (1-2 minutes) time under the broiler will give the top a perfect finish. Serve the salmon with your favourite rice dish and a green salad. 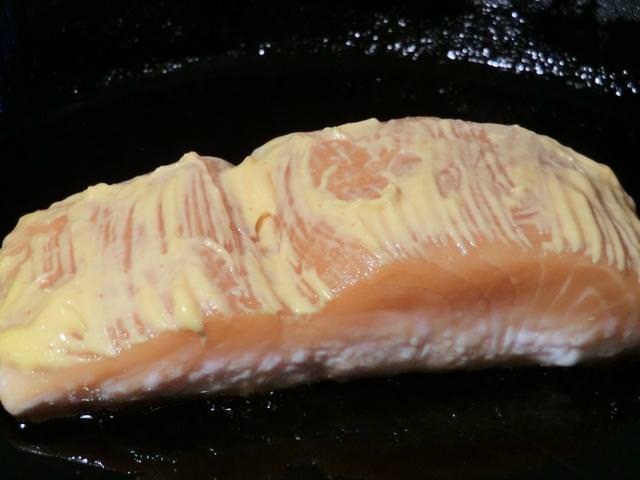 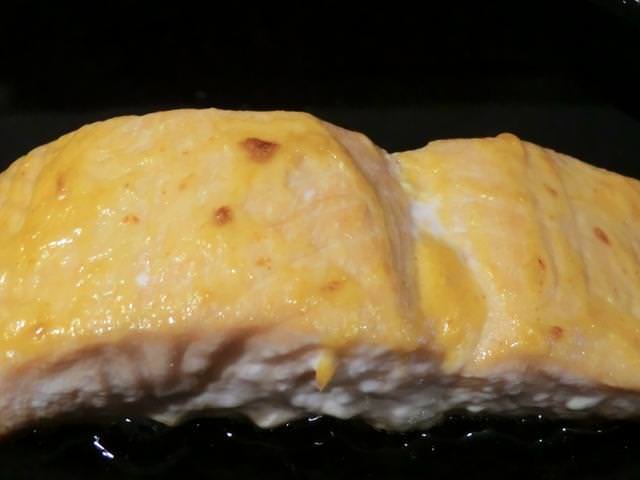 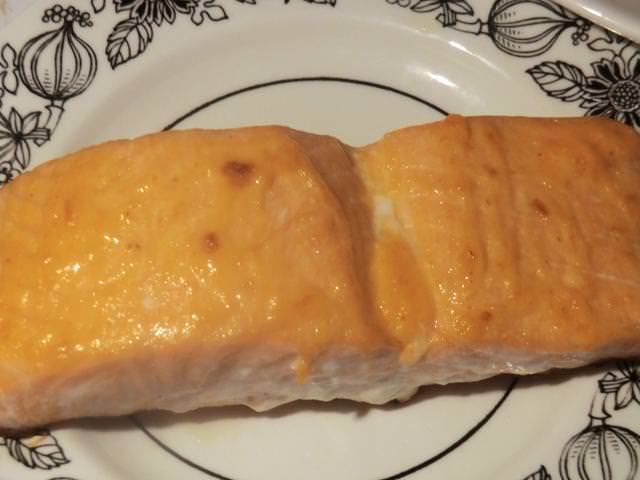 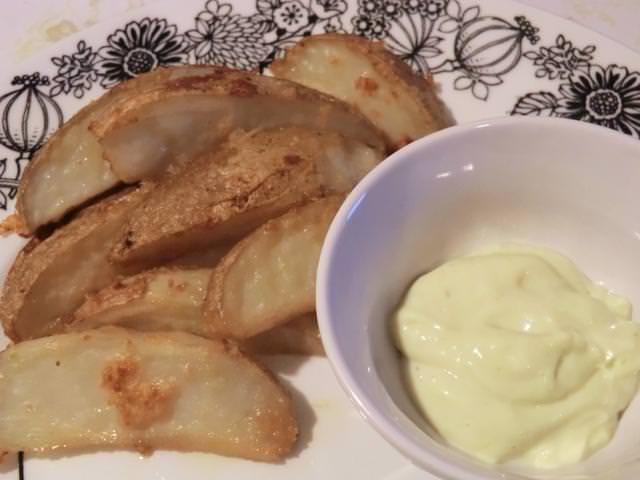 In a large bowl, toss the potato wedges with the rest of the ingredients. Spread the coated potatoes out in a single layer on a parchment lined baking sheet and bake for 30-40 min, or until the potatoes are tender. 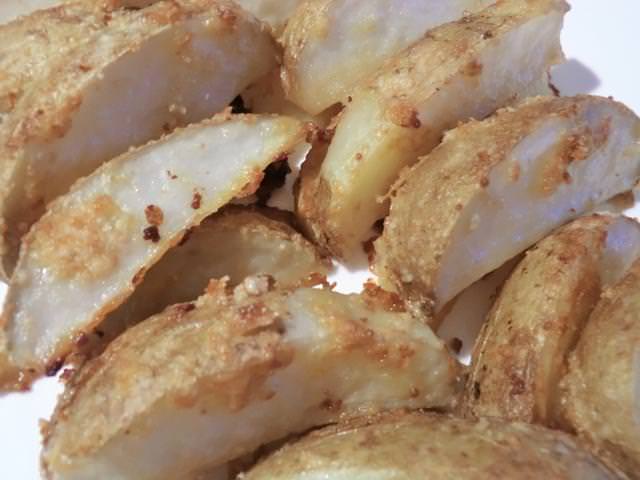 Making sushi at home is easier than many imagine.

There are a few basic ingredients: short grain sushi rice, rice vinegar, sugar, salt, toasted nori sheets (full or half size). Fillings vary, of course, but the unsung heroes of sushi are the condiments like soy sauce, pickled ginger and wasabi. 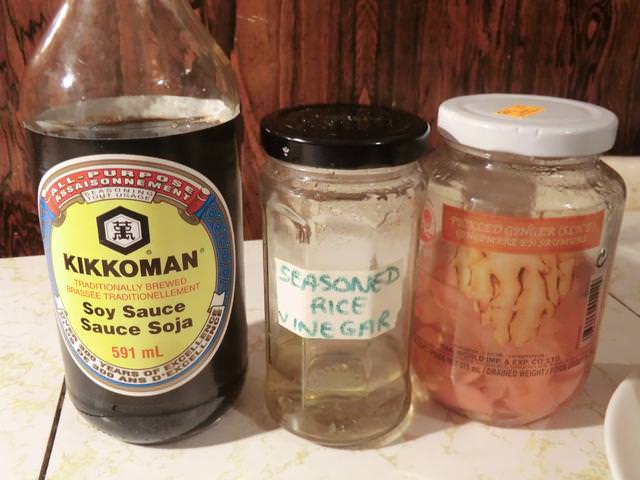 And sauces … to include in your roll or to drizzle over the rolls for a garnish.

Unless you’re planning on a big party, only make small amounts of the sauce shortly before making your sushi rolls.

Basic Mayo Sauce Recipe – 1/4 cup home made or commercial mayo (or Miracle Whip) and 1/2 tsp Sriracha or a rounded 1/2 tsp of wasabi powder. Stir into the mayo and taste. Add more of the add in, or the mayo depending on your preference. 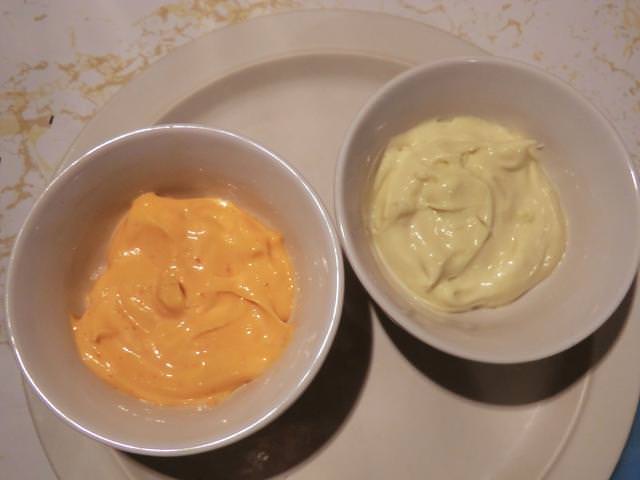 Getting ready to make the sushi rolls: sharp knife, working/cutting surface, rolling mat and a freezer bag to wrap the mat in so it stays clean. 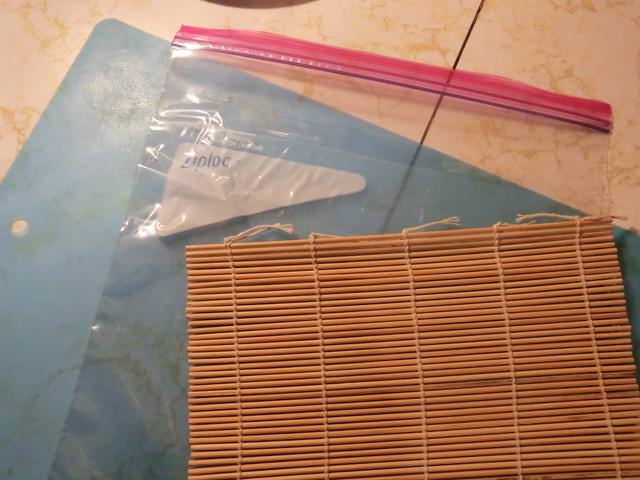 Nori … nori sheets have a smooth/shiny side and a rough side (left of the picture). The rice is placed on the rough side. 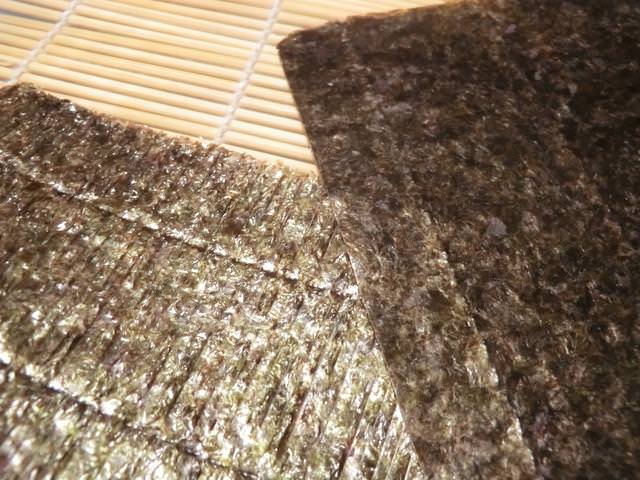 Along with making the more commonly known maki sushi rolls, I made something called “gunkan” or battleship sushi. 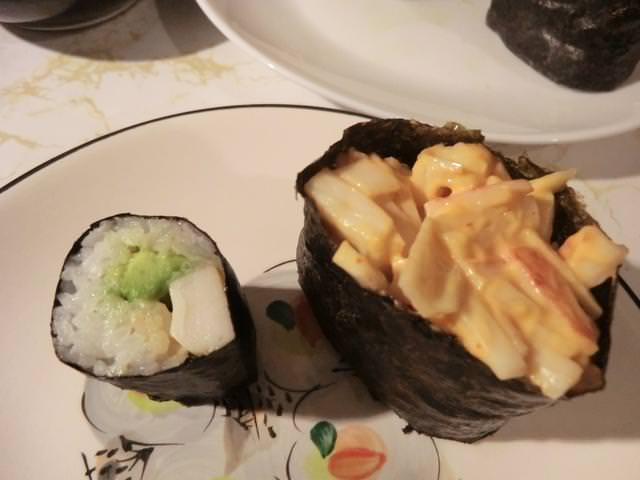 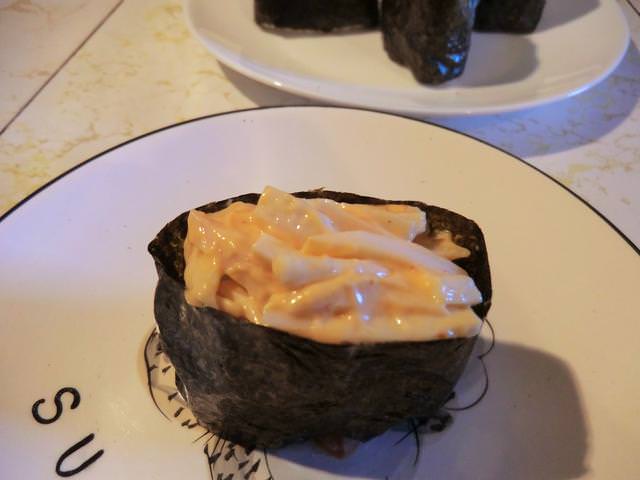 Instructions for making the Gunkan sushi:

Wrap the strip of nori around the rice ball. 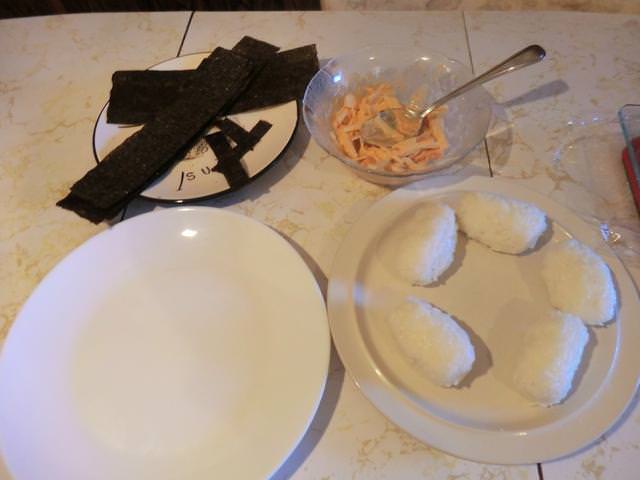 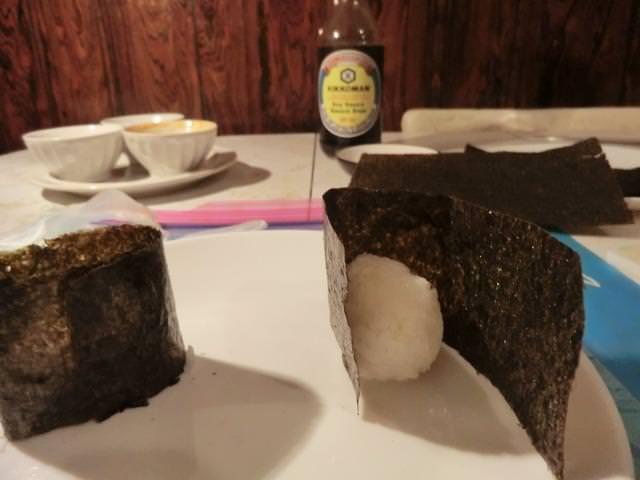 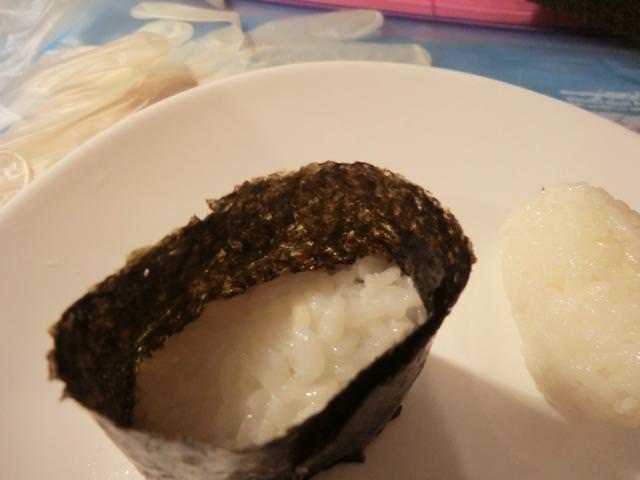 Top with about a tablespoon of desired filling … like the spicy Sriracha shredded ‘crab stick’ below. 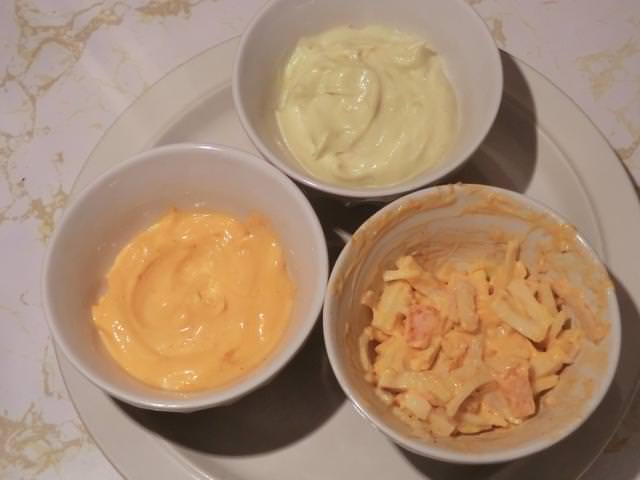 Parts of the world need rain but here, in south-western Ontario, we’ve had rain 4 out of the last 5 days, including this weekend. A bit of sun would be greatly appreciated. Since I have lots of food in the freezer, I decided to take a break from cooking … though I did want to use up the last few leaves of kale in my crisper, and some of the sweet peppers I bought on sale (4-pack for $1.88) since areas were getting ‘soft’. The carrots are getting a bit tired too. And, for a change of pace, I soaked some white quinoa to add to the soup in place of rice, potatoes or pasta/noodles. 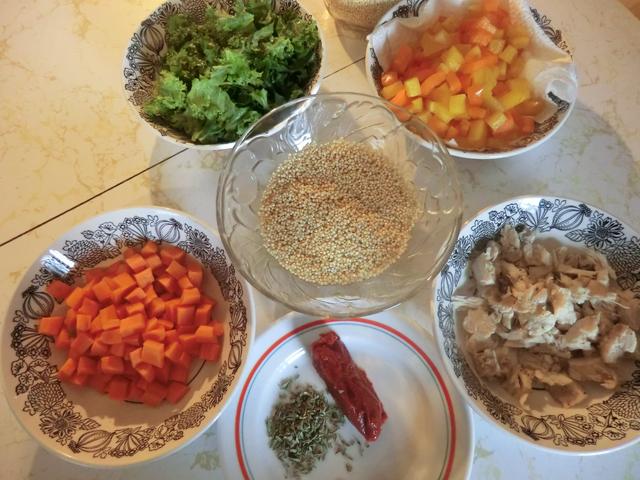 The result, a Veggie, Turkey and Quinoa soup with the tiny bit of turkey breast left in the fridge after eating it for most of the past week. 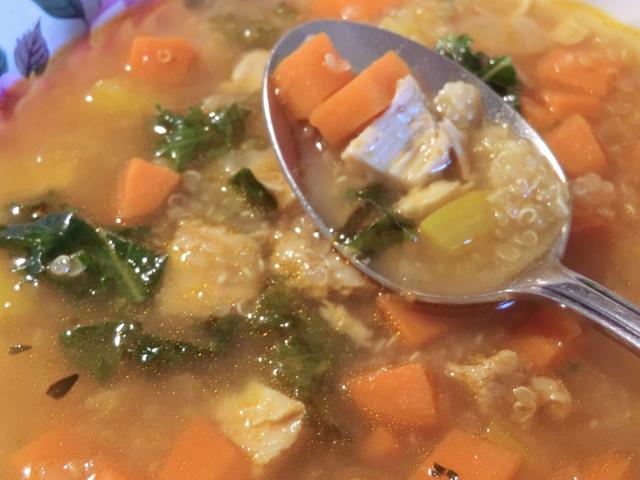 If you have some diced tomatoes (canned or fresh) or marinara sauce, you can add that to the soup as well. I just had some tomato paste, so, with that, dried thyme and chicken stock, I made this delicious soup.

Work lunches need bread and since I prefer buns, I made a batch of yeast dough and played with the shaping. Some of it ended up as kaiser rolls (~70 gm) and the rest … well, with Halloween and Thanksgiving (US) ahead, and the Canadian one behind, I shaped some of the dough into pretty little pumpkins (~50 gm) with a whole clove for a stem. For a bit of texture/nutrition/fun, I added a cup of finely ground and sifted rolled oats in the dough in place of a cup of all purpose flour. 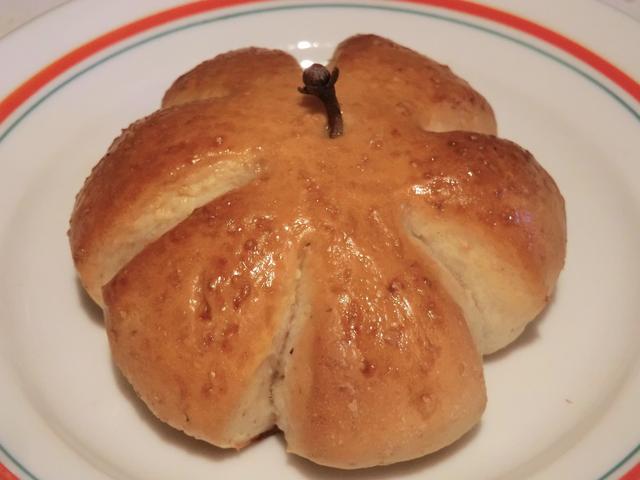 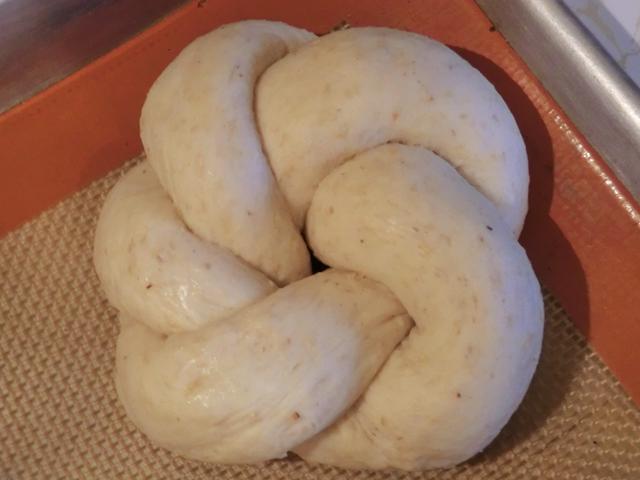 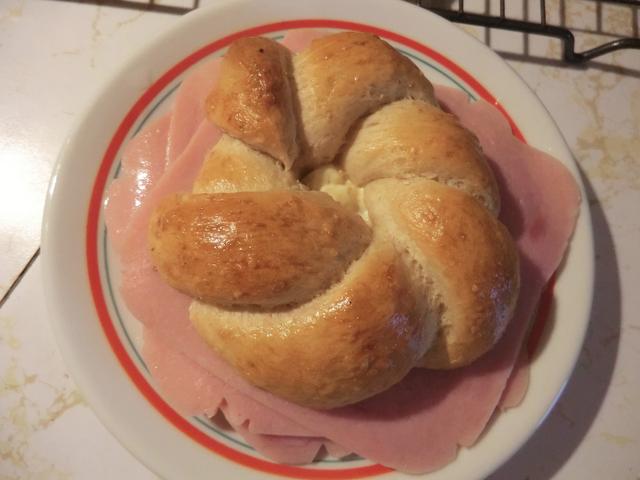 Scald the milk in a pyrex measuring cup in the microwave. Stir in the butter and let cool until just barely warm.

In a small bowl, combine the warm water and 1 tsp out of the total sugar. Stir in or sprinkle on the dry yeast. Let sit in a warm place to proof until the yeast is nice and foamy (5-10 min).

Whisk in the warm milk mixture and the proofed yeast. Beat well with a wooden spoon until you have a smooth batter. Gradually stir in the rest of the flour, starting with about 1/3 of a cup at a time, until it’s too thick to stir and forms a ball around your wooden spoon.

Turn out the dough onto a lightly floured work surface, using part of the reserved flour. Knead for about 10 minutes. Cover with the mixing bowl, and let rest for about 5 min. Continue kneading for another 5 minutes until you have a firm but supple dough. Shape the dough into a round ball.

Add a couple of tsp of vegetable oil to a large bowl, place the ball of dough into the bowl and roll around several times to coat the ball of dough. Cover with a sheet of plastic wrap or a damp towel (so the surface doesn’t dry out) and place in a warm place to rise until doubled, about 45 min. An electric oven with just the light on works well.

I cut the dough in half (>400 gms each), and shaped one half into 8 (~50 gm) pumpkin rolls and the other half into 6 (~70 gm) kaiser rolls. I let the rolls proof for about 30 minutes in a warm place, covered, then brushed the top with a whole egg beaten well with 1 tbsp of cold water, and then baked the rolls until well browned (15-20 min) and cooked through.

For Pigs in Blankets:

300 gms of dough was rolled out into a 6 inch by 12 inch rectangle and cut across the short side into 1 inch strips and then wrapped around each Jumbo hot dog. The wrapped sausages were placed on a baking sheet and baked, unglazed, for 15-18 min, until the top was a golden brown and the bottom was firm and lightly golden as well.

Tasty sandwiches sometimes need a spread, like mayonnaise, and since I didn’t feel like going to the grocery store, I made a batch of blender mayonnaise. It failed on the first try, so I poured the oily mixture into a measuring cup, added a 3rd egg yolk, a squirt of French’s mustard and a bit of lemon juice back to the blender cup and then slowly poured in the failed oil mixture while my immersion blender was running again. Success. (Every once in a while I get a mayo fail, but I never throw it away. It’s worth adding another egg yolk or 2 to get a thick creamy mayo. In fact, it may have been a bit TOO thick.) 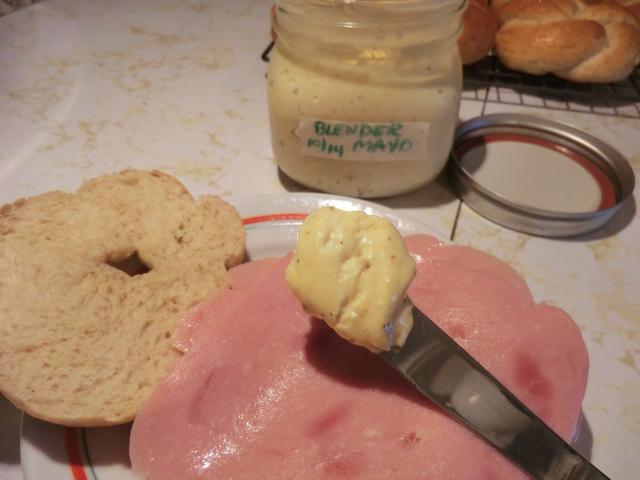 There was one red pepper in my 4-pack, so while my oven was still hot from baking the rolls, I cut it up, brushed some oil over the top, put the pepper on a lined baking sheet and then placed the sheet under the broiler to blister and turn black in places. Peeled and added to a batch of hummus, it made for another great sandwich spread or dip for veggies or pita breads. 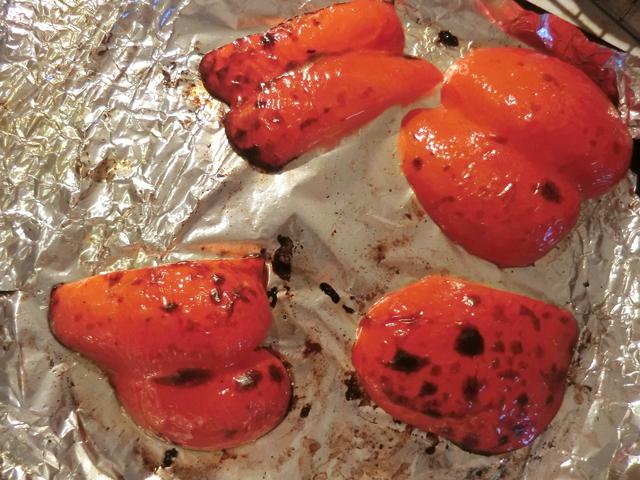 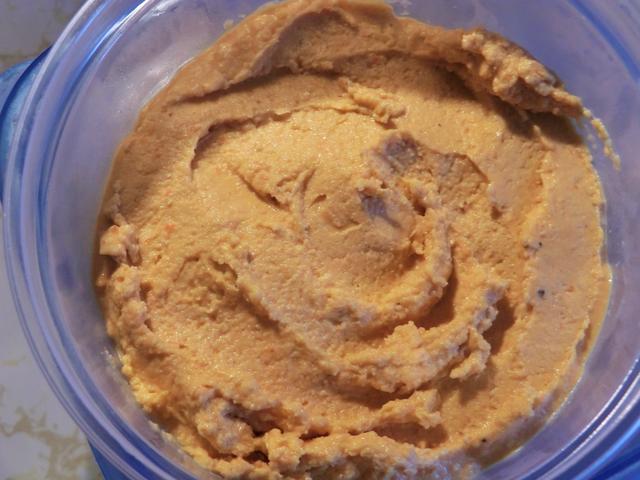 PS: I made dessert, too, but I’ll save that for a separate post.

But you can also make simple things like this rich and creamy home made blender mayonnaise without any artificial ingredients, to use in your egg, potato or tuna salads. It’s also a great base for an aioli with the addition of roasted and pureed garlic.

Or, a basic home made pudding like a classic chocolate, which I’ve posted in the past. (I’m reposting the recipe for convenience.) Spike it with rum, bourbon, whiskey or Grand Marnier or Cointreau for a grown up version.

Scald 1 1/2 cups of milk in a heavy saucepan (look for tiny bubbles around the edge).

In a medium sized bowl, mix together the cornstarch, sugar, salt and cocoa, add the remaining 1/2 cup milk, and stir until well blended.

Stir in the scalded milk and blend well. Pour the mixture back into the saucepan and stir constantly over medium heat until thickened. Let the pudding boil for one minute while stirring briskly. Remove from heat, pour into a bowl and let cool for a few minutes.

Stir in the vanilla, spoon into serving dishes.

And a butterscotch pudding variation.

In a saucepan, whisk together brown sugar, cornstarch, salt and egg yolk. Stir in 1/4 cup of cold milk until smooth.

Whisk in the warmed milk, very slowly. Place saucepan over medium heat and cook until thickened. Let the pudding boil for one minute while stirring briskly. Remove from heat, pour into a bowl and let cool for a few minutes.

Whisk in the butter, a cube or two at a time until melted.

Whisk in the vanilla and then spoon into serving dishes.

Even a watermelon lemonade when your seedless watermelon turns out not to be as sweet as you hoped.

And remember that spaghetti meat sauce made with leftover odds and ends like green peppers and sauteed mushrooms? I tossed it with some large pasta shells. You can dress up the dish with grated Romano cheese or down with some leftover sweet and milky home made paneer (Indian farmer’s cheese).