I was thinking the same thing when I first ran across the artichoke. I watched video after video of the way to prepare (and eat) this vegetable, but it wasn’t until this past week, when I saw them on sale at the grocery store for 99 cents a piece, that I decided to actually buy and cook them myself. Of course, stuffed artichokes were the recipe I saw posted most often, but I didn’t have any Parmesan cheese in the house, and it’s not on this month’s grocery budget, so steamed artichokes seemed to be the way to go. Especially as I already had dip (leftover chipotle yum yum sauce) made to serve with them. Digging out the ‘choke’ on the raw artichokes also put me off. 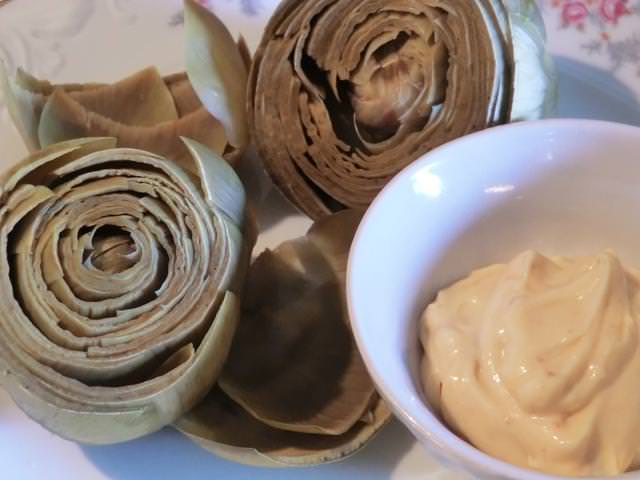 Things I forgot … you have to put your prepped artichokes in acidulated (lemon juice) water because, once cut, like with peeled apples, they’ll turn brown as they sit. And, it’s always a good idea to test the item you’re steaming BEFORE the maximum cooking time (25-30 min) suggested or you’ll over-cook it. Leave about an inch of the stem below the bulb as some of it is edible.

You can see the browning edges of the top (discarded) and the base already in the picture below. All the stuff on the top left is wastage from that one artichoke. 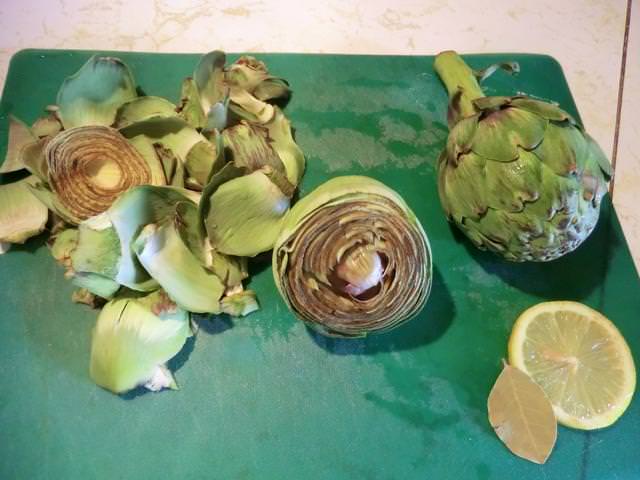 The inner side of each artichoke leaf is where you find the ‘meat’. In the second picture you can see the very small amount that was edible and scraped off with your bottom teeth. The amount of ‘meat’ increases as you get closer to the center. (Watching a video on how to eat an artichoke really helps I found.) 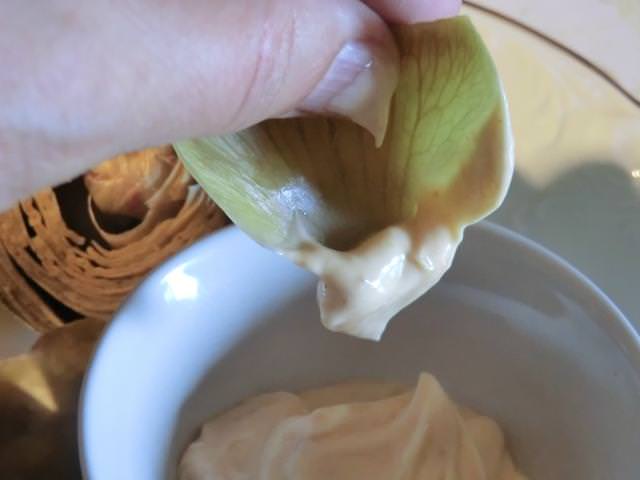 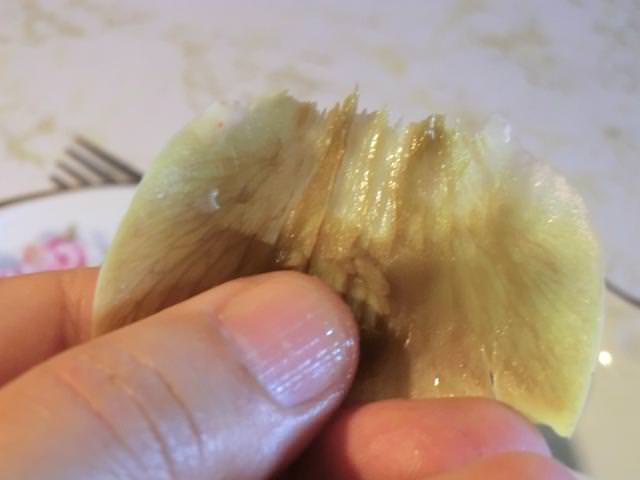 The hairy ‘choke’ under which you’ll find the tasty artichoke ‘heart’ needs to be scraped off. 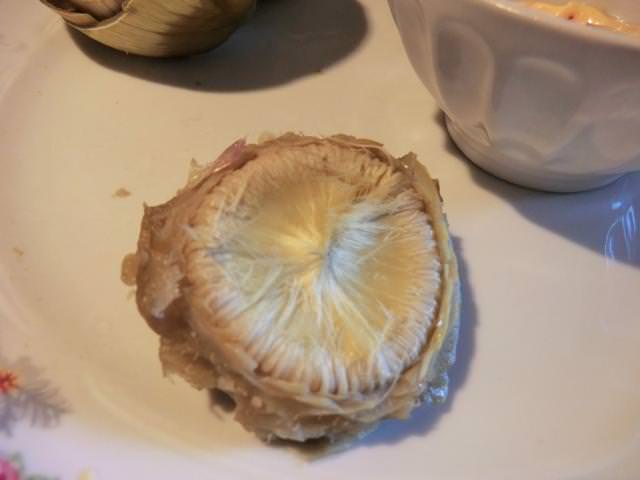 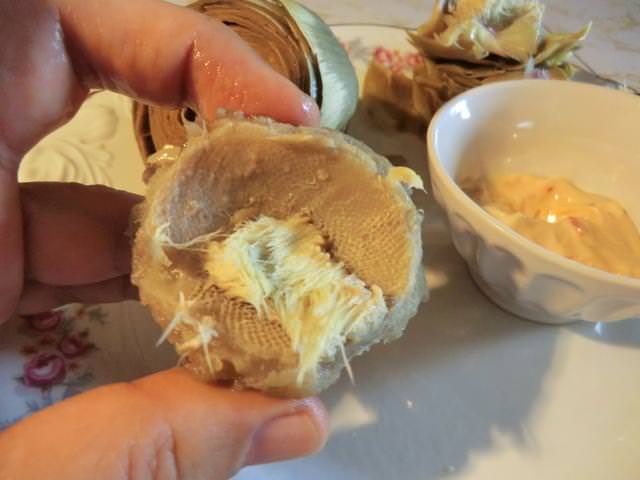 The cleaned ‘heart’ … cut it up into small pieces, dip and enjoy the whole thing. It broke while I was cleaning because it was over steamed. 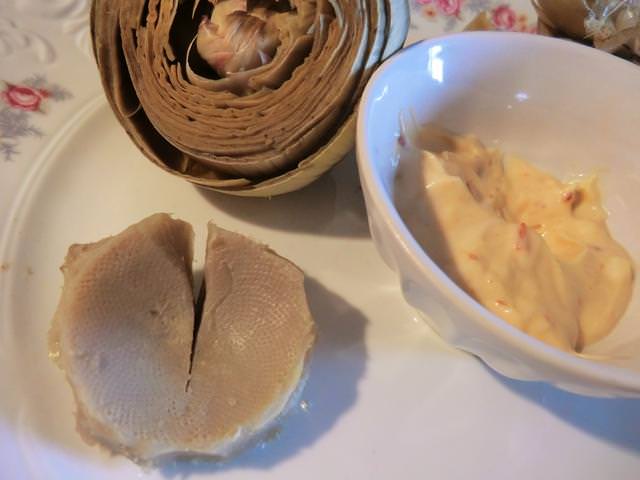 On the whole, my novice cooking attempt was successful and I don’t regret making it. I’d give myself a solid 6 out of 10 for the result. The taste of artichokes is pretty mild, mostly dependent on the dip you serve them with, so it shouldn’t turn anyone off from giving them a try. On the other hand, prep time and wastage before and after cooking may be more than you want to deal with. It’s not something I’d order if going out to eat with people I want to impress however. (I wouldn’t order lobster in those circumstances, either.) 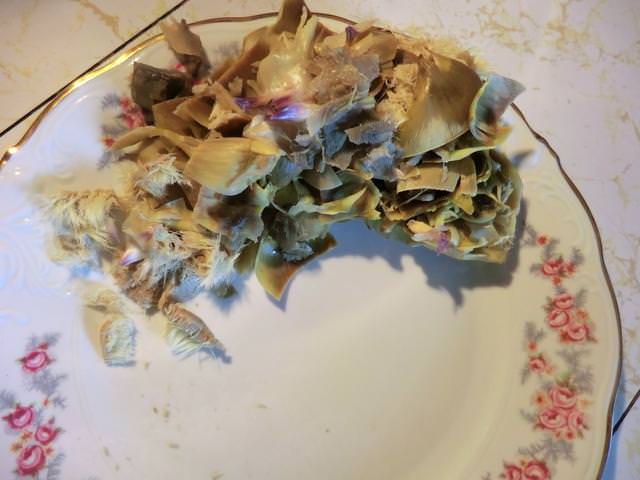 In conclusion: Tasty and with a good texture, especially if you don’t over cook them but, if I have an artichoke craving in the future, I’ll buy canned artichoke hearts and add them to a dip.