I rarely make a soup the same way twice in a row. Like this ham and potato chowder. Usually, I use carrots as well as celery to give it added body and flavour. Sometimes I add cream. Sometimes it’s just milk. And the thickener may be flour or cornstarch. Sometimes, there’s no thickener except for the starch from the potatoes. For a change of flavour, I used dried thyme in this batch. It’s always good. 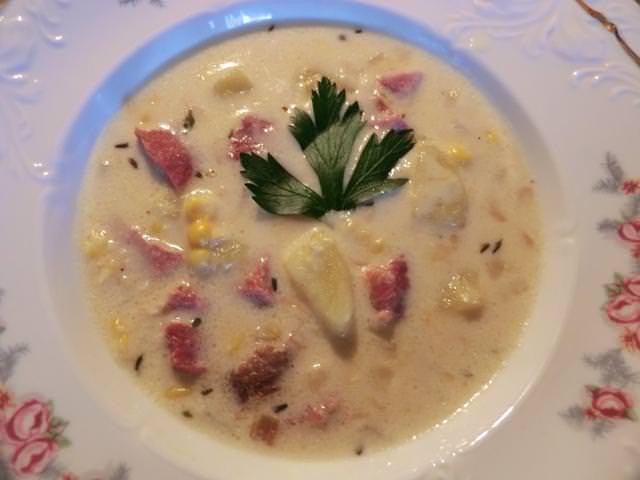 * Ham stock used from boiling a smoked picnic shoulder ham with a tablespoon of pickling spices.
** I didn’t have any whole milk and I liked the richness that the whipping cream gave the chowder.

In a large saute pan over medium/medium high heat saute the onion in bacon fat or butter, until it’s translucent and starts picking up some colour on the edges. Add the diced garlic and saute for another minute or two.

Stir in the corn and thyme and cook until fragrant, about 1-2 minutes.

Stir in flour and cook for another couple of minutes. Gradually stir in the stock, and cook, stirring constantly, until slightly thickened. Stir in potatoes.

Bring to a boil; reduce the heat and simmer covered until the potatoes are tender, about 12-15 minutes.

Stir in the ham, milk, salt and pepper, to taste, heat until the ham is warmed through. If the chowder is too thick, add more milk as needed until desired consistency is reached. 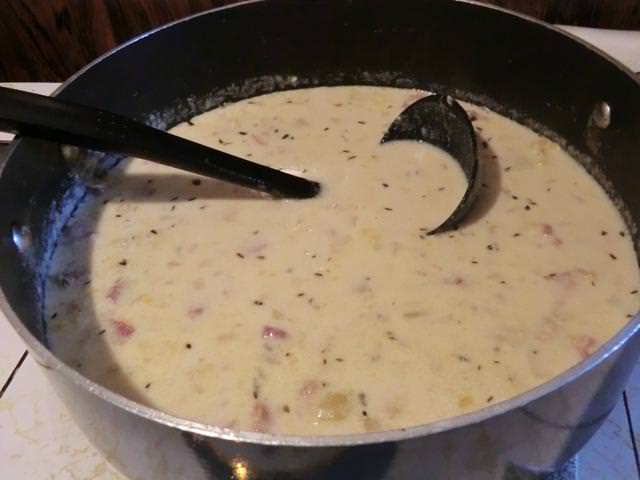