Sadly, you can’t just omit the cocoa powder in the previous ‘chocolate cake for one’ recipe and get a vanilla version, because the chemistry of the leavener doesn’t work, so I went net surfing for a real vanilla cake recipe.

My answer was found in a ‘vanilla cupcake for two’ recipe baked in a cupcake/muffin pan … so I buttered a couple of ramekins instead. Because a CUPcake is NOT a cake. I had some sticking in the very center of the mini cakes so on my second attempt, an orange flavoured variation, I buttered the ramekins and lined the bottom with a circle of parchment paper, cut to size, which solved the problem.

Frosting a cake at midnight does not result in the most photogenic of images but I had to snap a picture before going to bed. 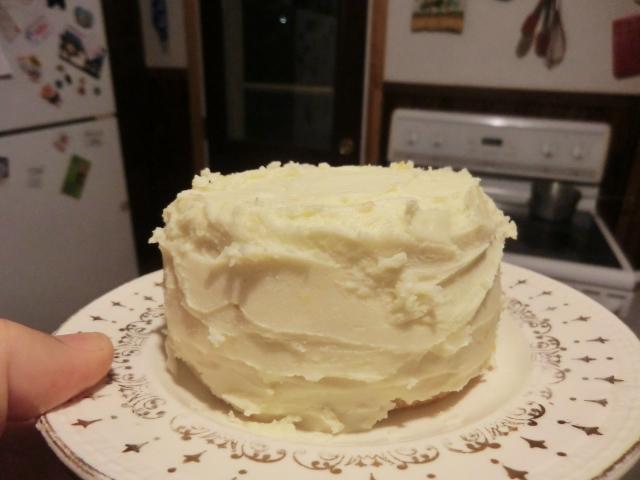 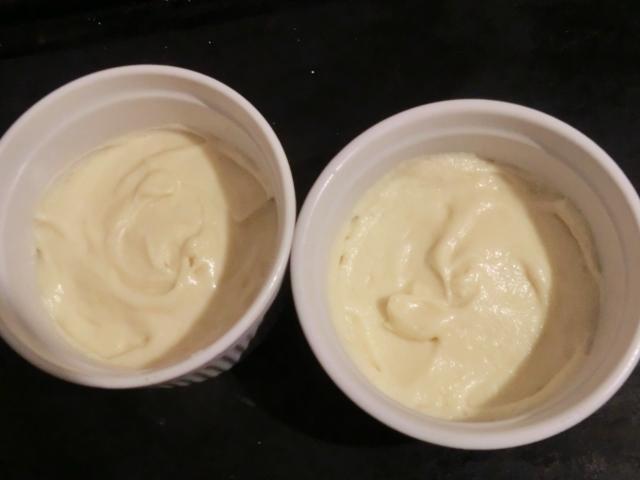 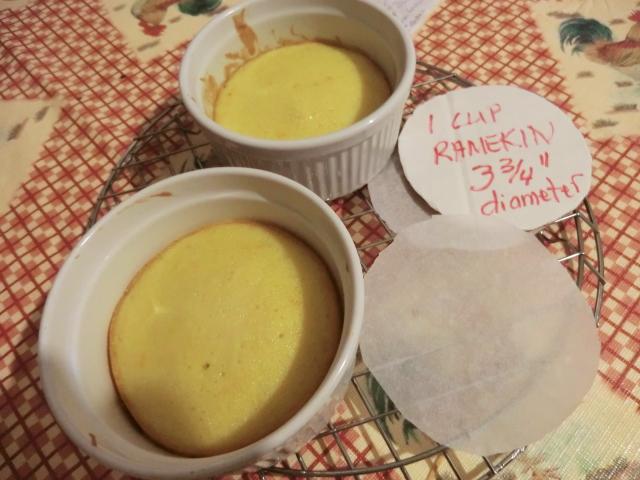 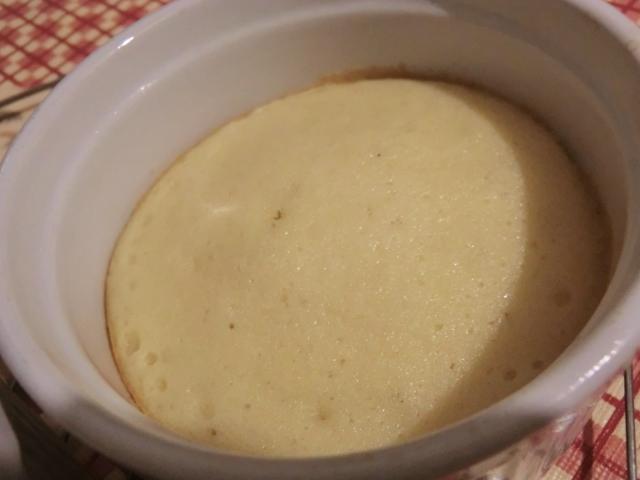 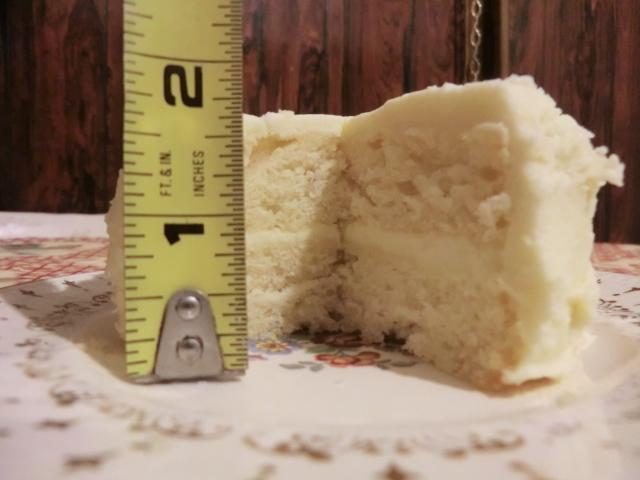 Crumb/profile of the vanilla cake … yes, there’s some orange zest in the vanilla buttercream frosting in case you spotted that fleck of orange. 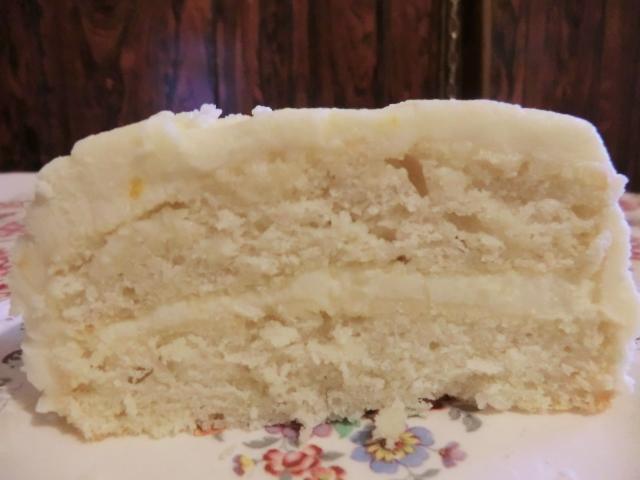 REVIEW: Very tasty cake. Fast and easy to assemble. Of course you can frost each ‘cake’ individually but the two layer version just has a lot more visual appeal. For a quick and easy frosting, slightly sweetened whipped cream would work.

Of course I had to take the plain vanilla cake to the next level by adding 1 tsp of orange zest and substituting orange extract for half of the vanilla extract, in the next version I made.

I also decided to switch to a less sweet filling/frosting since the vanilla buttercream that I had used, from the same web site as the chocolate cake, was just too sweet. My ideas evolved from a cream cheese/butter/icing sugar version to one that reduced the amount of sugar and substituted it with home made curd. Since I had made an orange flavoured cake, I made a batch of orange curd to enhance the orange taste. I scaled down a frosting recipe that I found here.

I used less curd than I had originally calculated but I still think the frosting was too soft, even after half an hour in the fridge, so I’d cut back even more on future attempts. 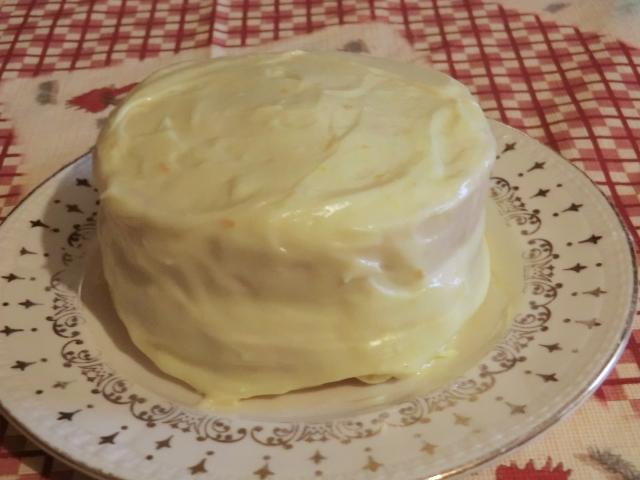 I’d also use the frosting for a filling, in the future, because the orange curd oozed out while cutting into the cake. Hopefully the frosting as filling will stand up to serving better. I’m a firm believer in not skimping on the amount of frosting used but I think the amount I made is enough to fill and frost two mini two layer cakes.

Crumb/profile of the orange cake 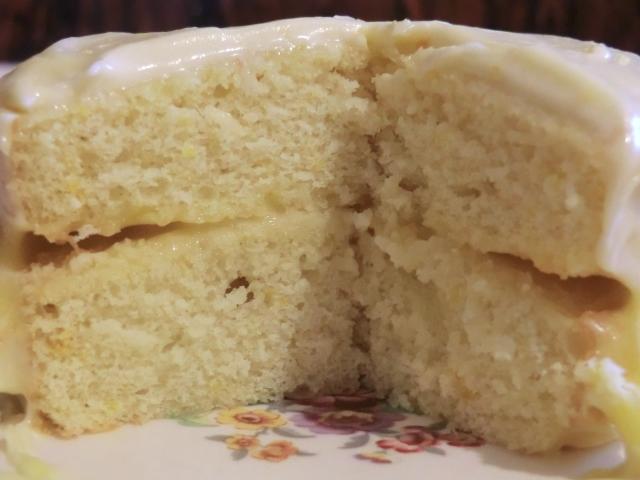 * Start with the smaller amount and decide whether you’ll need another 1/2 tbsp. You probably won’t need the full amount

Using an electric mixer, beat the cream cheese and butter in a small bowl until smooth. Beat in the powdered sugar, then the orange curd. 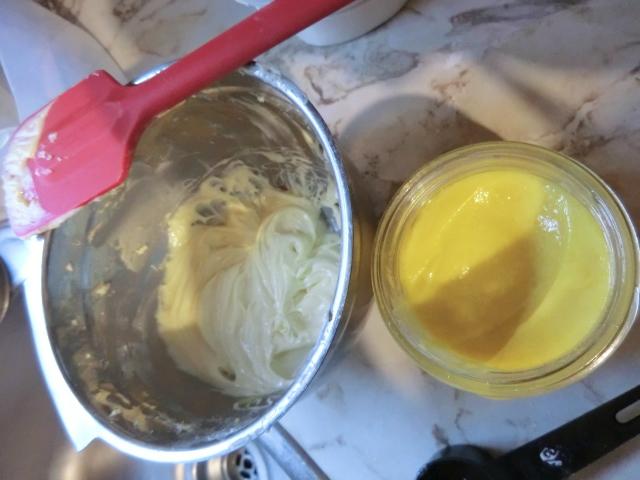 Spread the frosting over the cake.

NOTE: The original recipe says the cake may be frosted a day before serving and covered with a cake dome and refrigerated so it doesn’t dry out.

8 thoughts on “Vanilla Cake for One (Review) and a Variation”