Because you can never have ENOUGH pie crust recipes, I gave this one a try … half unsalted butter and half lard. The blogger who posted the recipe, used shortening, which I didn’t have, as she claims that using the two different fats takes advantage of the best characteristics of each.

I haven’t bought quinces in years and at the exorbitant price of the imported ones ($2.49 each), I wasn’t about to make a whole pie out of them. But, I was able to combine one perfectly poached quince (green bumpy looking fruit on the right in the picture below) with three Braeburn apples (on sale at $1.15 a pound) to produce a tasty filling to test out my latest pie crust recipe. 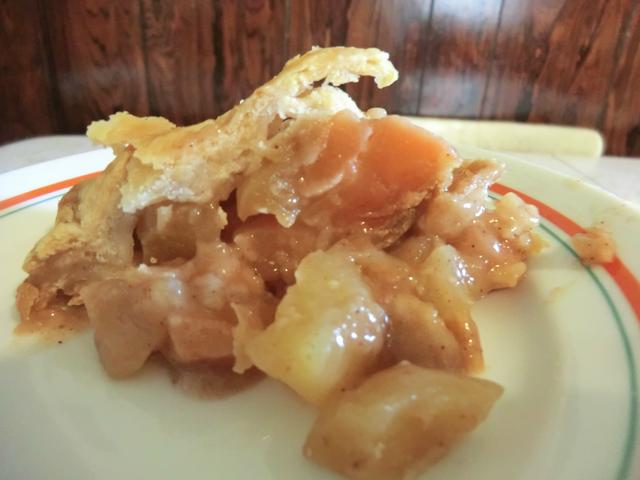 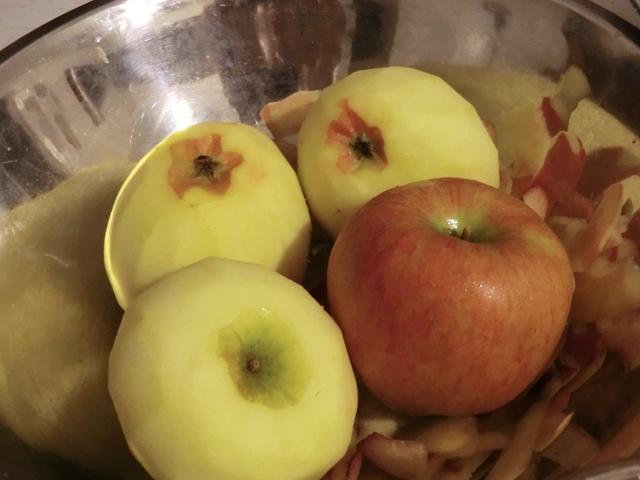 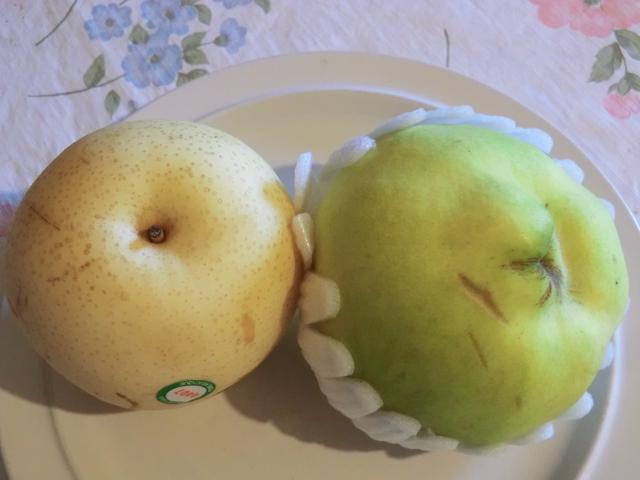 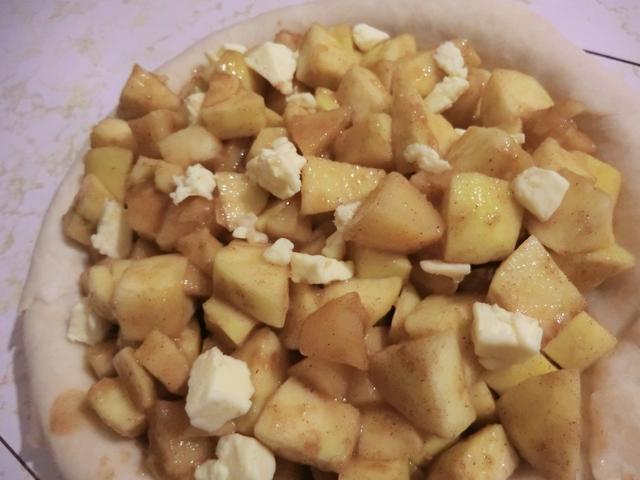 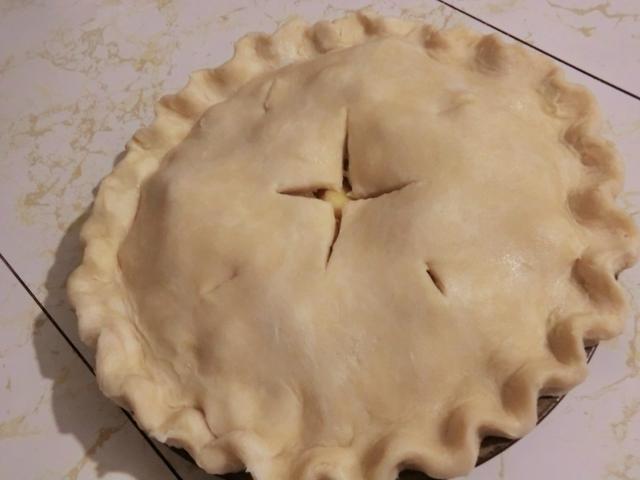 The pie recipe I used was based on this one with some changes. I’ve included it below so it’s all in one place.

pie pastry, enough for a top and bottom crust

Combine the water, sugar, salt and diced quince(s). Bring to a boil, cover and reduce to a simmer. Cook until the quinces are crisp-tender, 8-10 minutes. Remove the fruit to a large bowl and let cool. Continue cooking the liquid, uncovered, until it reduces to about 1/4 cup.

Preheat the oven to 500 deg F with a rimmed baking sheet on the lowest shelf level.

In a small bowl, combine the sugars, flour, salt, cinnamon and nutmeg.

Add the chopped apples to the bowl with the cooled quince. Sprinkle the sugar/flour/spice mixture over the fruit and gently stir in the thickened quince liquid. Pour the filling into the pie bottom.

Add the top crust, seal and crimp the edges. Cut slashes in the crust.

Place the pie dish on the preheated baking sheet, turn the heat down to 425 deg F and bake for 25 minutes or until the top is lightly browned. Reduce the heat to 375 deg F and continue cooking until the filling bubbles and the crust is golden brown, another 45-55 min.

Remove the pie pan to a cooling rack until it’s come to room temperature. Refrigerate for AT LEAST 2 hrs and preferably overnight before cutting into the pie. 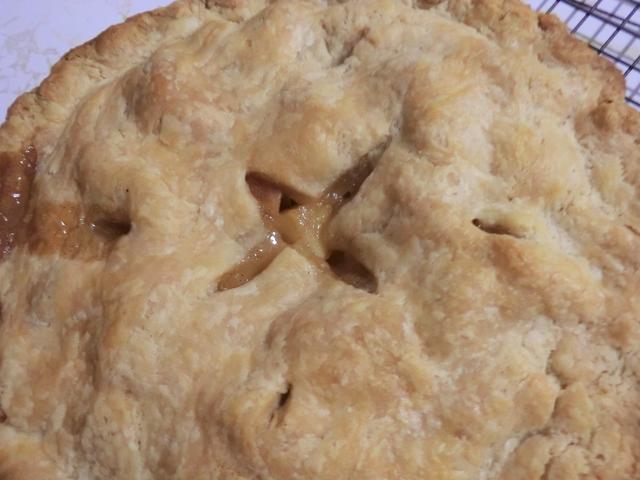 Because I’m a cheap frugal home cook, I rolled out the trimmings from the apple and quince pie to form a top crust for a spinach and paneer tart. For the base, I used a mini pie shell from the freezer. It was made with the leftover pastry from my PREVIOUS pie bake … a nectarine crumble.

I wasn’t sure how much filling I would need so I threw together something that came out pretty well. 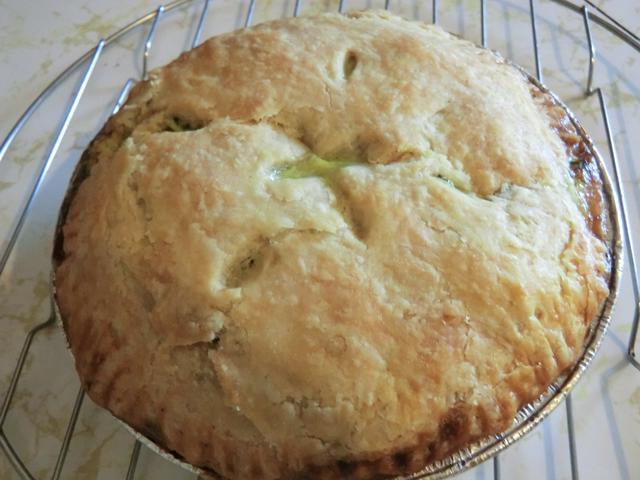 pie pastry, enough for a bottom crust, divided in half

Preheat oven to 425 deg Fahrenheit. Adjust the shelf in the oven so it’s at the lowest position. Place a baking sheet in the oven so that it will preheat as well.

Assemble the filling ingredients. Fill the base, add the top crust, folding over and crimping closed. Cut several slits for the steam to escape.

Place the tart on the baking sheet. Bake for 40-45 minutes until the crust is golden brown. 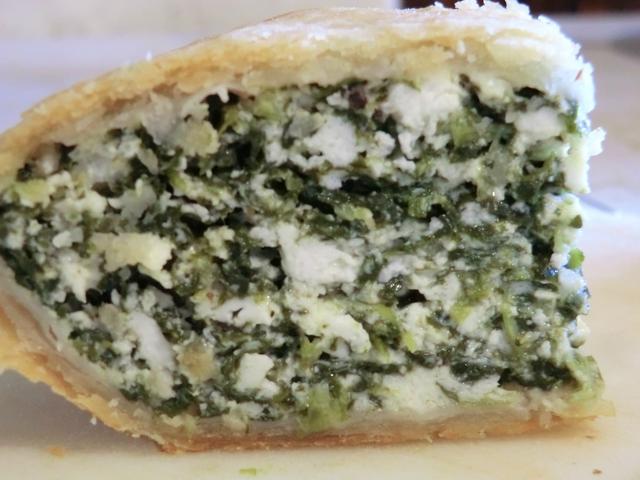 REVIEW: I found that the pie crust recipe lived up to its name … it IS both flaky and buttery. It’s easy to make, tasty and will remain in my recipe collection. The fillings of both the sweet and savoury variations were delicious as well.

Beef isn’t on the menu too often at my house. Not that I don’t love it, but chicken and pork are more affordable and usually on sale. However, I decided to splurge this year and make a British themed Christmas menu with the focus on a prime rib.

It was huge for a single person, almost 5 pounds, but the price was right (<$30), and I figured I’d get at least six meals out of it.

So, I bought what turned out to be a single bone roast and made the traditional sides – Yorkshire puddings/popovers with gravy from the juice, roast potatoes and carrots and mincemeat tarts and some bought marzipan topped fruit cake for ‘afters’.

I tried to restrain my picture taking cause I wanted to eat warm food for a change. I wasn’t totally successful but I TRIED.

And then, because I always have to go that little bit further, I bought a wedge of Stilton cheese and did a poached pear (cranberry mead, honey, cloves, vanilla bean, cinnamon stick sugar syrup), Stilton and walnut plate.

Prime rib before and after roasting

I’ve baked butter tarts before but it’s been SO long that you may not remember these wonderful little Canadian treats. You can bake them plain or add raisins or nuts. You can even add chocolate chips to the filling. But they ALL start with a basic pie crust.

So that’s why today’s post is titled as it is.

A pie crust is the start of many great dishes, sweet OR savoury. And I’m not talking a fancy French ‘pate sucree’, like Martha Stewart whips up. I’m talking about a plain and simple, tender crust with REAL LARD!! Not butter. I used the recipe on the Tenderflake lard box, this time, but I added a teaspoon of baking powder to the basic recipe.

Why you may ask?

Cause that’s what Edna Staebler does. She’s the author of the cookbook, “Food That Really Schmecks”, among others, based on Mennonite cooking as it is practiced in the Waterloo, Ontario region. I own 4 of her cookbooks and thought that I should really start cooking out of my cookbooks more, rather than depending strictly on the internet for recipes.

Of course, I’ve said that I’d start doing that ages ago. Good intentions and all that.

The only drawback is that SOMETIMES, the cookbooks, leave out important information. Like how big you should cut out your pastry circles when making tarts and how many tarts the filling will FILL. 🙂

Stir the flour, baking powder and salt together.

Cut in the lard with a pastry blender or 2 knives until the shortening is in pea sized pieces. (They don’t all have to be the same size.)

In a measuring cup, combine the egg and vinegar. Add enough cold water to make one cup.

Stir the liquid into the flour mixture, adding just enough to make the dough cling together. Then gather the dough into a ball, and separate into 6 portions.

Wrap each portion in food wrap (Saran Wrap) snuggly and pat lightly into a disc.

Refrigerate for one hour or overnight. Before rolling the dough out, leave it at room temp for 15 mins.

Lightly flour surface and roll into circles, then pat the dough into pie pans, following pie recipes. Be careful not to stretch the dough.

Inside the Derby tart

In a large bowl, cream the butter and sugar together. Add the beaten eggs, corn syrup, salt, vanilla and the liquor and whisk together so it’s well mixed.

Sprinkle the chocolate chips and the pecan pies over the base of the unbaked pie crust.

Pour the filling carefully over the chocolate chips and nuts.

Bake for about 45 minutes or until the top is set and the edges of the pastry is a golden brown. There will be almost no jiggle in the center of the pie.

A scoop of ice cream or a tbsp of sweetened whipped cream is a great addition to this already decadent dessert.

Spray the inside of the muffin tins lightly with PAM or other cooking spray to help in removing the tarts from the tins.

Roll out the pastry 1/8 inch thick and cut 4 inch circles. Lay inside large muffin tins and gently press into shape.

Sprinkle ~1 tbsp each, chocolate chips and chopped nuts in bottom of every muffin tin.

Fill each muffin tin with ~2 tbsp of the pie filling and place in the preheated oven. IMMEDIATELY reduce the oven temperature to 350 deg F and bake for 20-25 minutes until the filling is set and the underside of the tarts have browned.

NOTE: Bake the tarts in the bottom third of the oven so that the bottom of the tarts will cook through and brown.

Let the tarts cool to room temperature in the muffin tins before running a butter knife around the edge of the tins and removing.

I apologize for the sloppy cut picture above. I was also making 2 large pizzas and by the time I had kneaded the dough and done all the rolling etc for the tarts, I was too tired to do more than snap a quick shot.