The first month of the new year is almost gone and, while I ate well, I’ve had to be very frugal in my grocery shopping. Which meant foraging in my freezer for things I bought in more affluent days. Some of the meals were very simple while others were a bit more fussy. 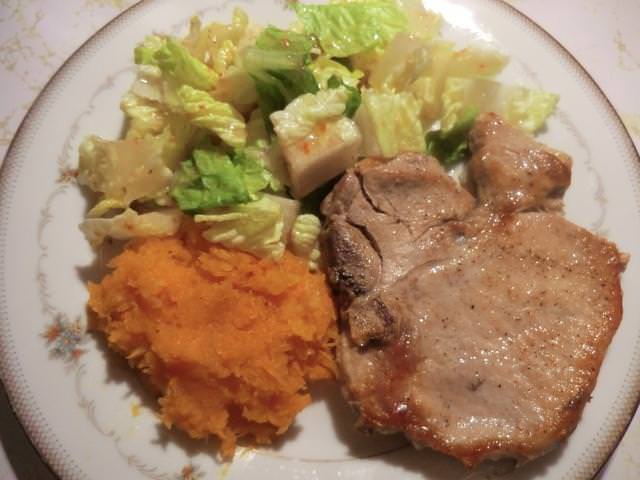 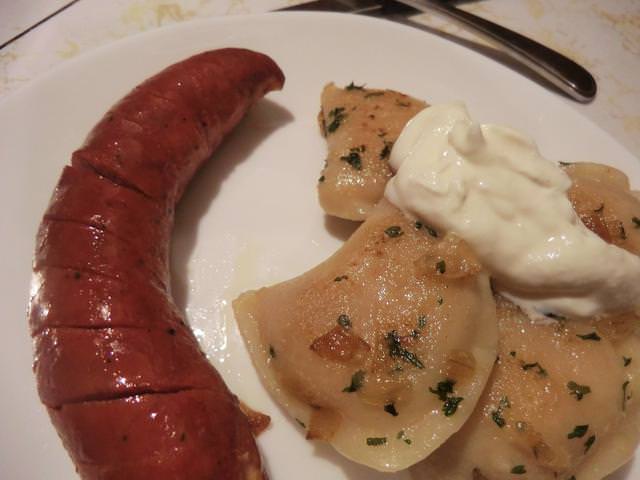 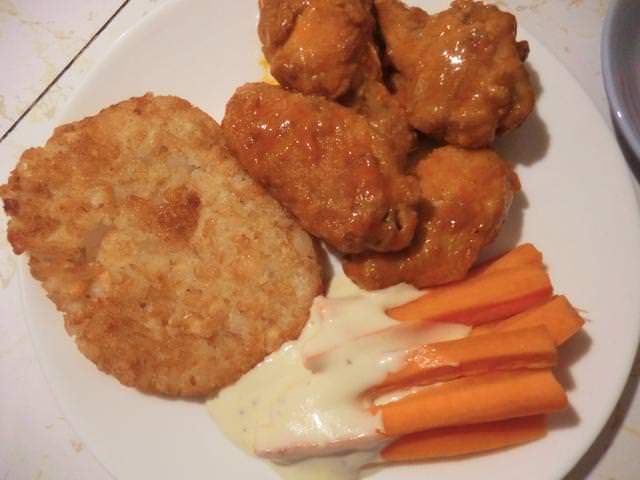 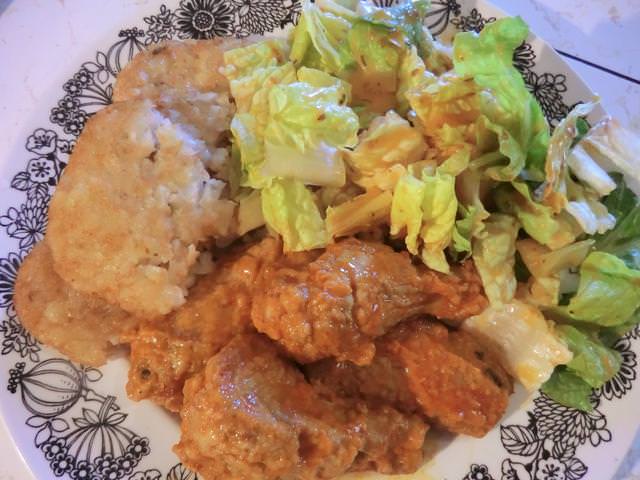 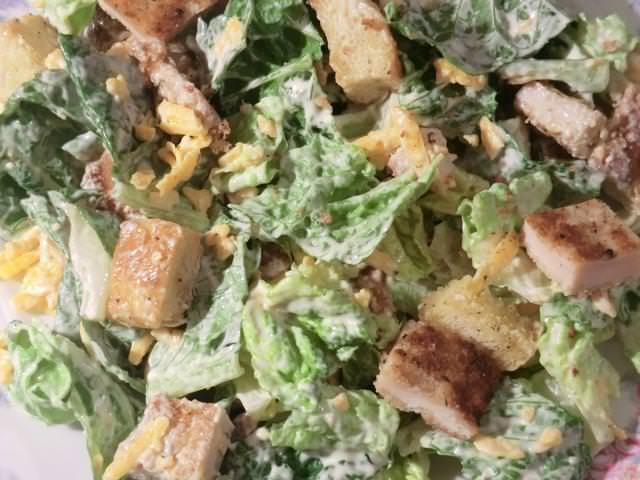 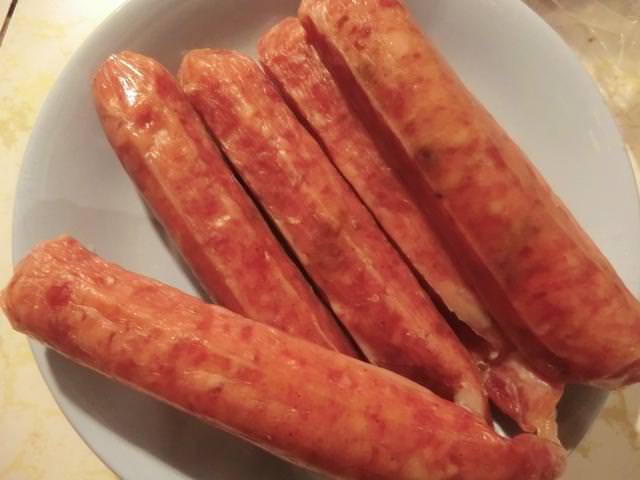 One of my favourite dim sum dishes is sticky/glutinous rice lotus leaf wraps (lo mai gai). Along with chunks of steamed chicken, small chunks of Chinese sausage (lap cheong), Chinese mushroom and scallions are also found in the wrap. I remember pieces of hard boiled egg … but that seems to have disappeared. When I ran across a package of those tasty sausages, I picked it up with the vague idea of making something similar. Instead, I just added them to the top of a pot of rice before cooking it and let the fat melt and flavour the rice. Then I chopped up the sausages, and stirred them, along with green onion and soy sauce, into the rice. A spoonful of sambal oelek for spice and I had a fast and delicious rice bowl for lunch or supper. 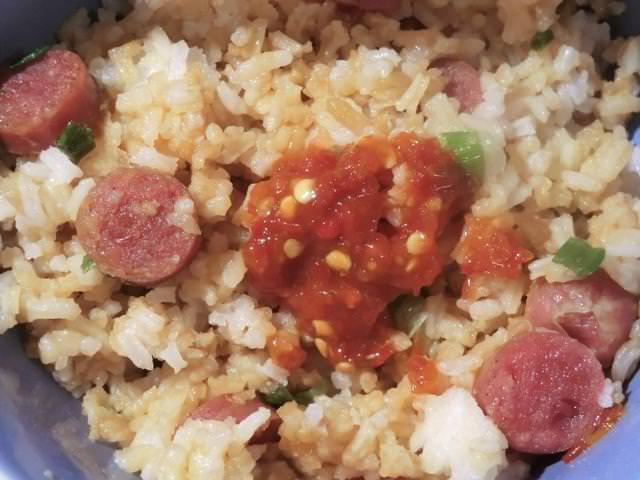 Cheese “Boats” or Pies aka Fatayer Jebneh or Khachapuri

Some years ago I made fatayer, a Middle Eastern yeast based pastry which may be shaped in a variety of ways and filled with meat, spinach, mushroom or cheese. Left as flat rounds or mini ‘pizzas’ the dough may be topped with a za’atar paste (a spice mixture made up of thyme, sumac and toasted sesame seed) or a ground meat mixture. The meat ones are called ‘sfeeha’. 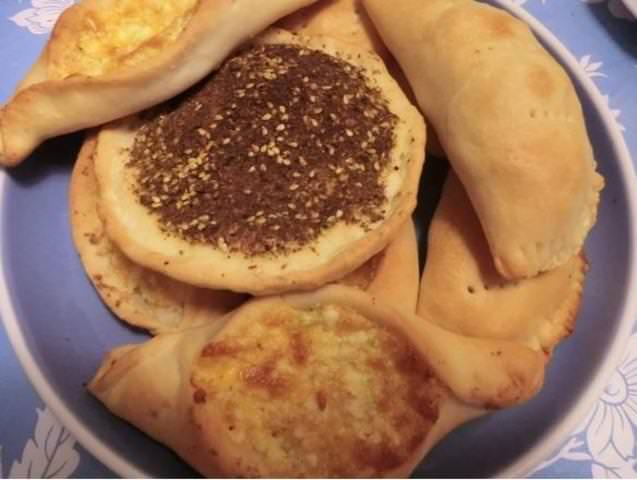 To make the dough

For the cheese filling

Proof the yeast by mixing it with the 2 tsp of sugar and warm water in a cup; the yeast should foam and bubble. If it doesn’t then it has gone bad and you need to replace it with new package.

In a bowl, whisk together 2 1/2 cups of the flour, salt and baking powder (if using) until combined.

Add the oil and then rub it into the flour mix with your fingertips.

Add the yogurt and the water/yeast mixture and knead the dough until it forms a smooth soft ball that doesn’t stick to your hands, using the reserved flour as needed. (TIP: lift the dough and slam it into the table 7-10 times during kneading. That will give your baked goods that fluffy interior.)

Oil a bowl with a little olive oil, place dough inside, cover with a clean towel or plastic wrap and leave it in a warm place until it doubles in size.

Push down the dough and then cut into half. Roll each half into a sausage shape and cut into 10 even sized portions. Roll the 20 pieces of dough into balls and cover them with a clean towel and allow to rest for 10 minutes.

Roll each dough ball into an elongated oval shape 5-6″ long. Place 1 rounded tbsp of the cheese filling in the middle of the oval, leaving about 1/2″ around the margin.

Once you’re done shaping the pastry gently press the top folds down to adhere the dough to the cheese. This helps to prevent the pastry boats from opening up when you bake them

Brush the pastries with milk, egg wash or olive oil to give them a beautiful golden color when they bake.

Rest the pastries for 10-15 minutes after shaping before baking them.

Bake on the lower-middle rack for 15-20 min until the tops and bottoms are golden brown.

Recently, I learned about a similar cheese topped pastry called khachapuri made in Georgia (the Caucasus mountains). I was intrigued by the shaping, so I used the same dough and a similar filling (ricotta, cheddar and feta cheese, green onion, salt and pepper)  I’d used to make the fatayer and played with the dough. They looked pretty good (and tasted delicious) but I need to work on my shaping as the boats opened up during baking. NOTE: The cheeses were all frozen and bagged 2-3 months ago so I wanted to use them up. 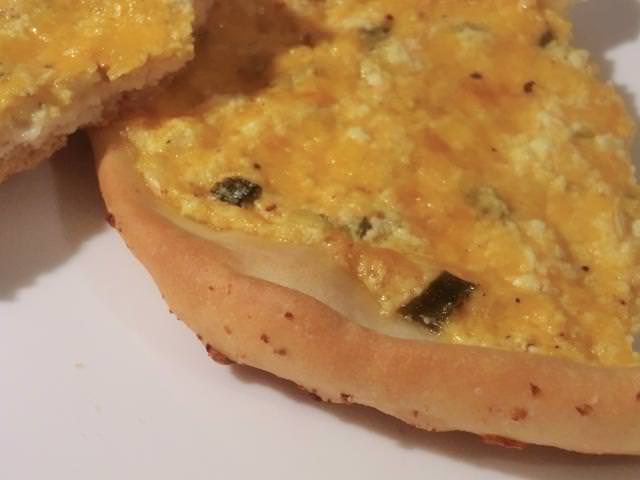 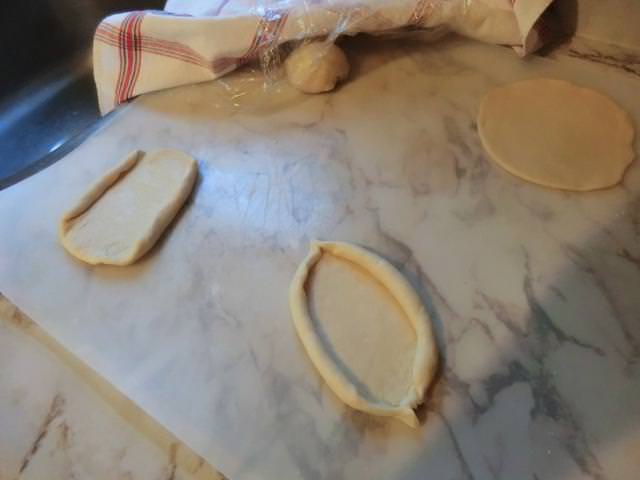 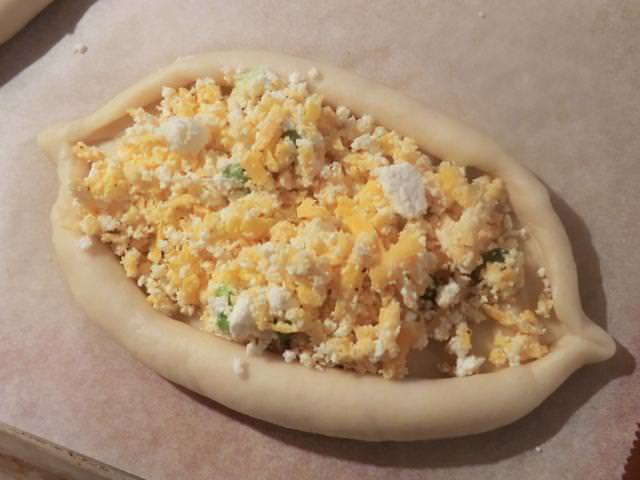 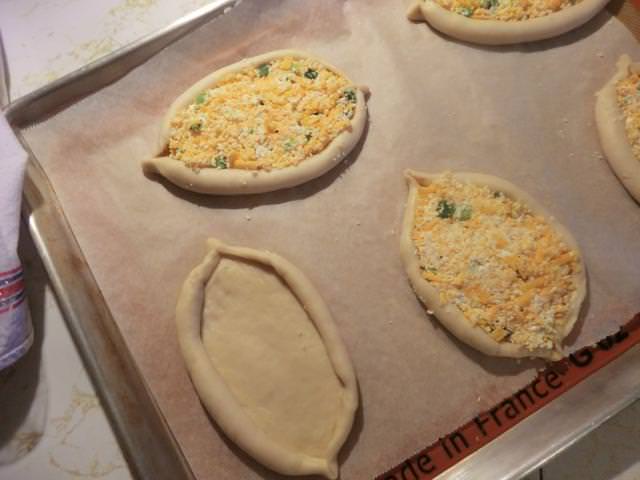 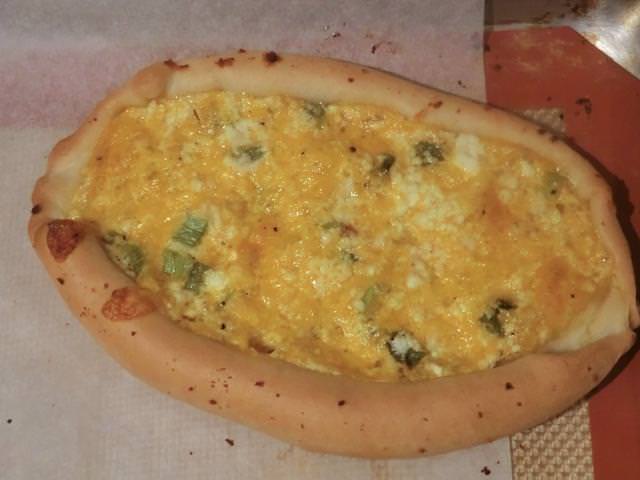 Dessert made with leftover pastry from the chicken pot pies 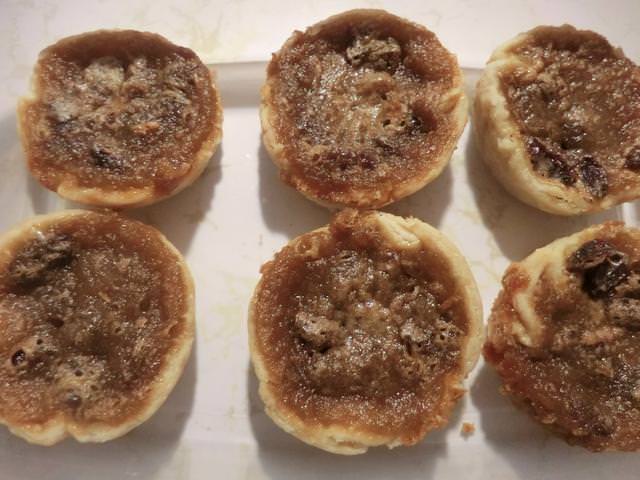 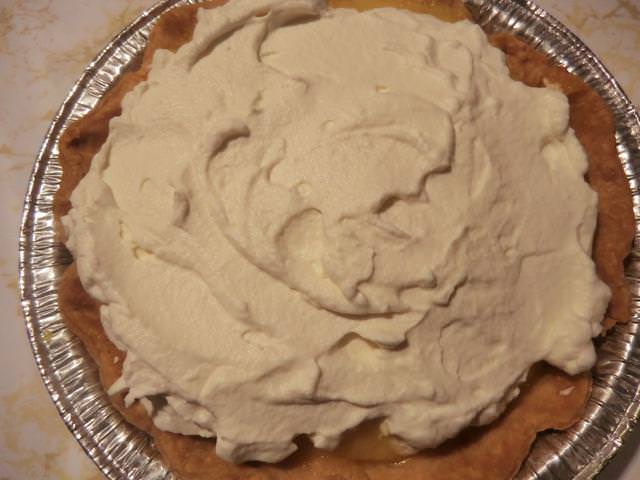 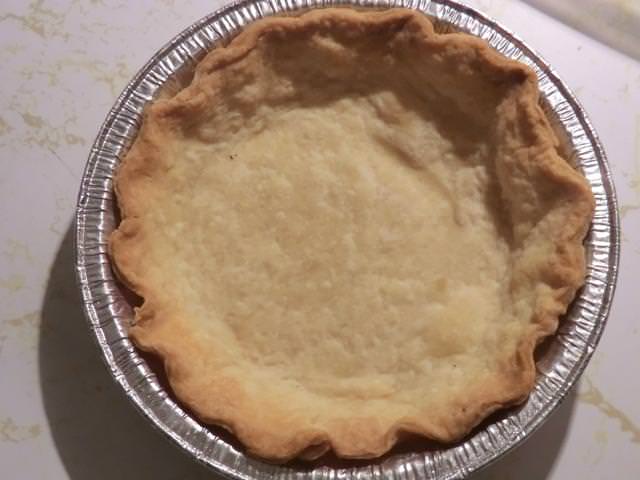 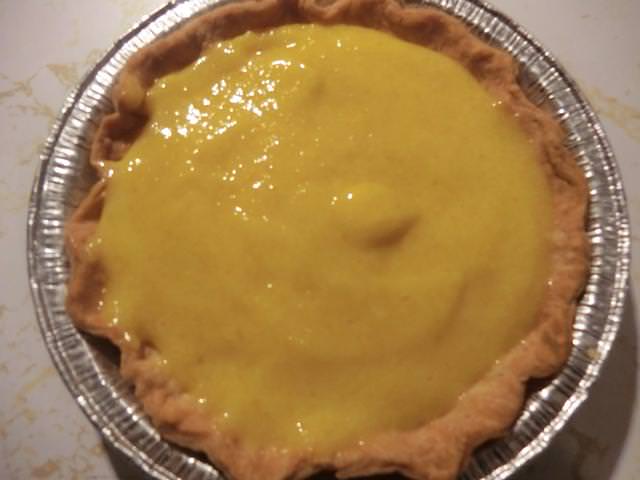