Leftover leeks in the fridge, potatoes sprouting in the basement and a four day stretch at home recovering from a cold, meant I had the ingredients and all the time needed to try a second knish recipe.

I started with Chef Bryan’s recipe on the Klondike Potato website but had to make some changes. Mostly to reflect the shaping technique I used.

I had some concerns about the amount of salt called for in the dough, as well as the filling, and it turned out that my fears were warranted, as the filling was saltier than I would have liked. When cooking potatoes for mashing, I usually throw two generous teaspoons (using a disposable plastic spoon not a measuring one) of salt into the boiling water, which may have contributed to the excess salt taste. And, rather than sauteeing the leeks and the onions in butter (unsalted, though the recipe didn’t say), I used margarine. If I had been thinking, I would have added more mashed potato to the filling I was making to dilute the salt but, obviously, I was NOT thinking. In my defense, I was also trying a new meatloaf recipe at the same time so I was distracted.

Rather than making individual square knishes, I tried to replicate the beef filled version my mom used to bring home from the deli where she worked for twenty years. They made two/two and a half inch wide meat filled logs which were baked and then cut to size for serving. It turned out that I had too much dough (or conversely, not enough filling) as a result of changing the shaping method. In the recipe below, I’ve doubled the filling ingredients to accommodate this.

Aside: About half an hour after my knish roll came out of the oven, I had the curious thought that I may not have measured out three cups of flour for the dough, but only TWO. 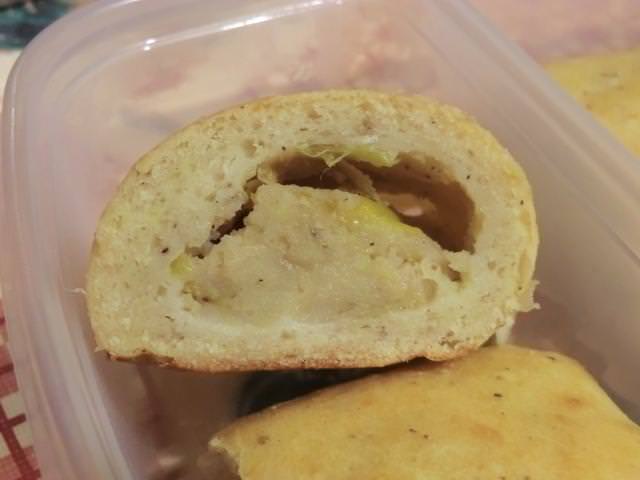 Prepare a half baking sheet by lining with a sheet of parchment paper.

Whisk together the flour and baking powder in a small bowl and set aside. 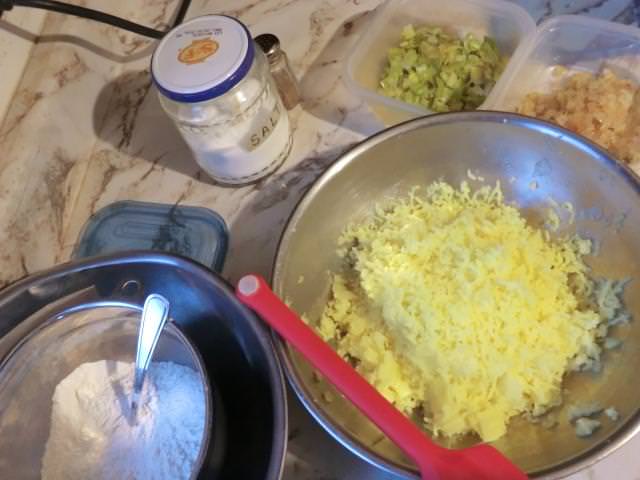 Combine 1 cup of mashed potatoes, salt and pepper in a large bowl. Whisk in the olive oil and mix well until nice and creamy and the potatoes come together.

Add the dry ingredients to the wet. Mash together. It won’t come together yet. Add the water to pull it into a dough by creating a well in the middle and adding the water. Mix together until it comes together into a soft dough.

Cover the bowl with a cloth or sheet of plastic wrap and let the dough rest for about 30 minutes.

Make the filling during this resting period.

Add one cup of mashed potatoes to the onions and leeks, as well as the salt and pepper. Stir well to combine and set aside.

Lightly flour a clean work area. Take your dough ball and cut it in two equal halves. Roll out each portion into a rectangle that’s 1/4 inch thick and about 4 inches wide x 14 inches long.

Spoon half the filling into the center of one of the rectangles. 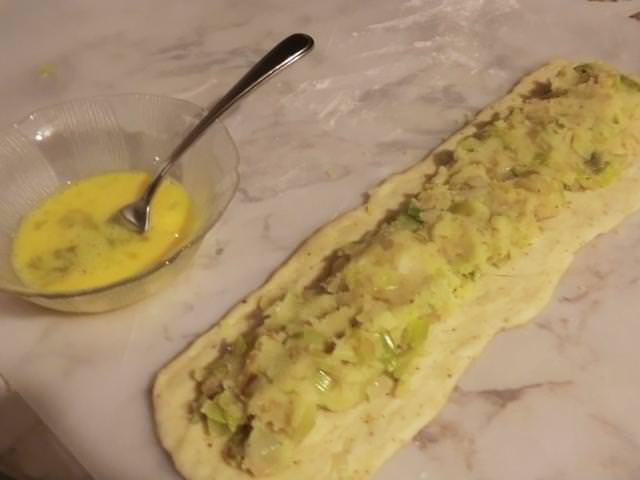 Place the half sheet into the preheated oven and bake for 45-50 minutes or until the top is golden brown. 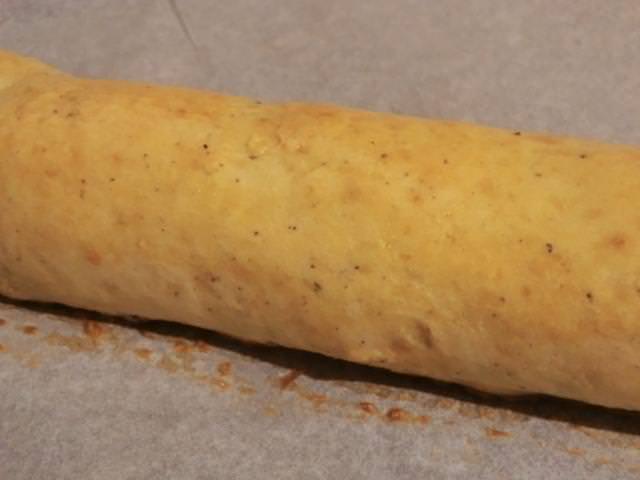 Let the knish cool until it’s barely warm, then cut the knish rolls into 2 inch bars.

Serve warm or room temperature with ketchup or spicy mustard. 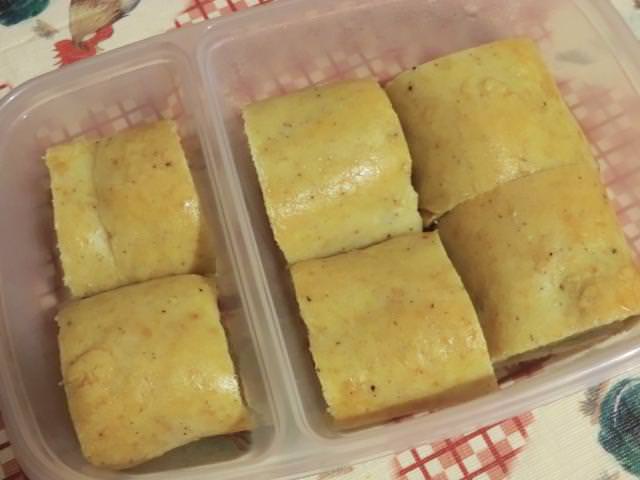 I served my knishes with a couple of slices of meat loaf and found that the sweet, tang of the ketchup-mustard glaze paired well with the heaviness of the knish.

Tater tots, mini bites of grated and deep fried potatoes, are a convenience food that make a tasty and fast side dish. A healthier version may be made with “cauli-rice” …  cauliflower florettes briefly pulsed in a food processor. The recipe below is a simplified adaptation of the various techniques and ingredients found on line. Though I DID add a ‘variation’ that seemed more extravagant. I haven’t tried it yet. Mainly because I didn’t have either the bacon or the peppers on hand. However, I have two packages of raw cauli-rice in the freezer. Maybe I’ll make them for Christmas. Or New Years. 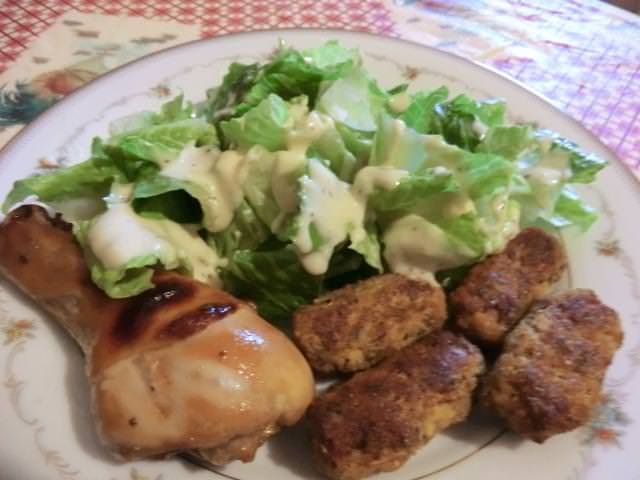 *Break down a whole head of cauliflower into florettes. In a food processor, 1/4 of a head at a time, briefly pulse the florettes until they’ve broken down into roughly rice kernel sized.

Preheat the oven to 375 degrees Fahrenheit.

Place the riced cauliflower into a microwave safe bowl, with lid, and cook 1-2 minutes on high. Let cool enough to handle. Place the cooled cauli-rice into a fine weave tea towel and squeeze out the excess water. (NOTE: I managed to extract about 3 tbsp of liquid out of this batch.)

Spray a nonstick cookie sheet with cooking spray or brush lightly with vegetable oil. Set aside.

In a medium sized bowl, combine all of the ingredients and season with salt and pepper to taste.

Spoon about 2 tbsp of the mixture in your hands and roll into small oval shaped tots. 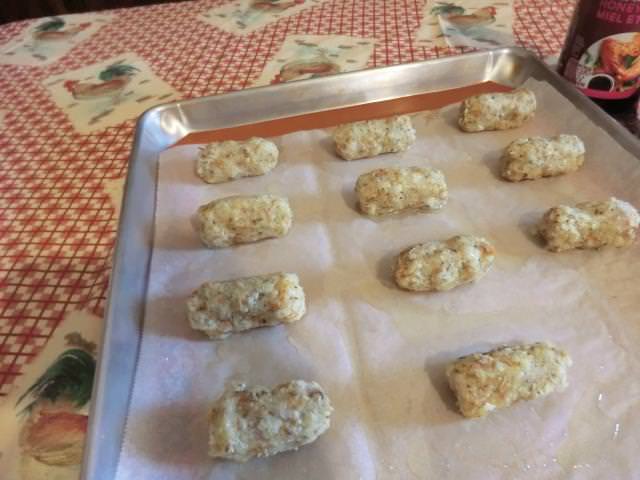 Place on the cookie sheet 1/2 inch apart and bake for about 20 minutes. Turn and bake for another 10-15 minutes. Both sides should be nicely browned and firm but still retain some bounce.

Remove and serve as a side dish. Or, as an appetizer, serve with ketchup, pesto, hummus or your preferred dipping sauce.

For an even more decadent appetizer, stir in the items below. 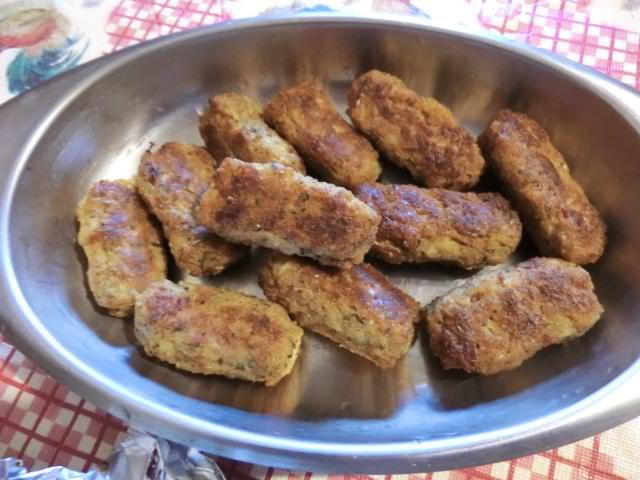