I had a recent conversation with a work colleague and the topic of sourdough came up. (See, it’s not MY fault.) Anyway, I offered him a sample of my dried starter so he could try to bake some. When I got home, I had a moment, or three, of insecurity, and decided to rehydrate a sample, to make sure that it was still viable after twenty-two months spent at room temperature in my pantry. The house is relatively cold (70 deg F) and it took three days to get a nice bubbly starter. And then, I had to figure out something to do with that starter.

As a consequence of the romaine lettuce recall, I’ve switched to raw vegetables and coleslaw as veggie sides. Coleslaw is relatively perishable so I planned on making my usual coleslaw staple … okonomiyaki. However, I decided to substitute the flour and water (and baking powder) in the recipe with sourdough starter. I did two, poorly planned trials, as I started by using active starter (plus half the baking powder from the original recipe). The resulting pancake was a bit loose to start with but did firm up. In the second trial, I used discard starter, cut back on the water (and NO baking powder) and was much happier with the results so that’s the recipe I’m including below, along with the accompaniments. 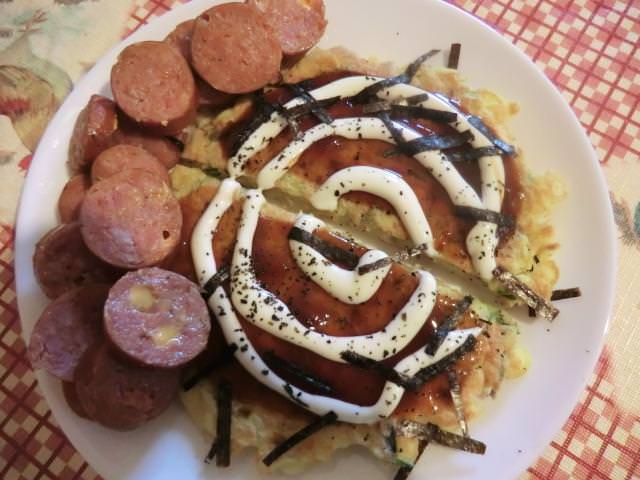 Optional Vegetable Add-ins – use a couple of your favourites

grated seasonal vegetables such as carrots, daikon radish, sweet potatoes and squash
grated firm fruits such as pears and apples

In a small bowl, stir together the starter, egg and the salt. Add the shredded cabbage and green onion and mix together thoroughly. If adding other vegetables, fruits and proteins, do so at this point.

Heat the griddle (or frying pan) over medium heat and with a paper towel, dipped in a bit of vegetable oil, season the pan. Spoon the okonomiyaki mixture onto the griddle and spread it into a round shape about 1/2-3/4 an inch (1.2 – 2 cm) thick.

When the edges of the pancake lose their shine (look dry, about 2-3 minutes), lay the cooked bacon pieces on top, turn the pancake over with a spatula and fry while pressing down on the pancake slightly until the middle is cooked through and set (a couple of minutes should be enough). 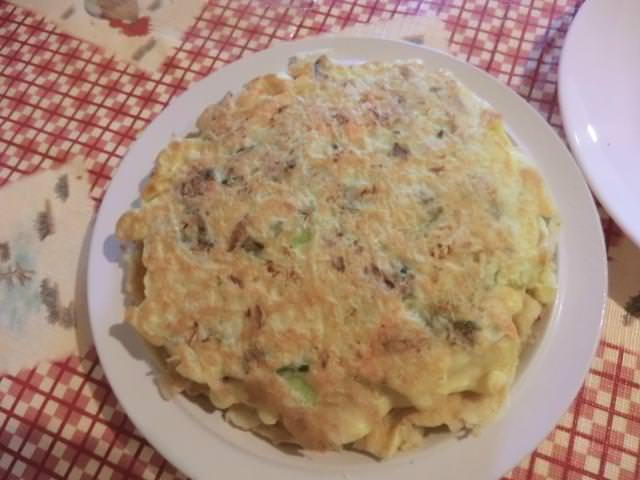 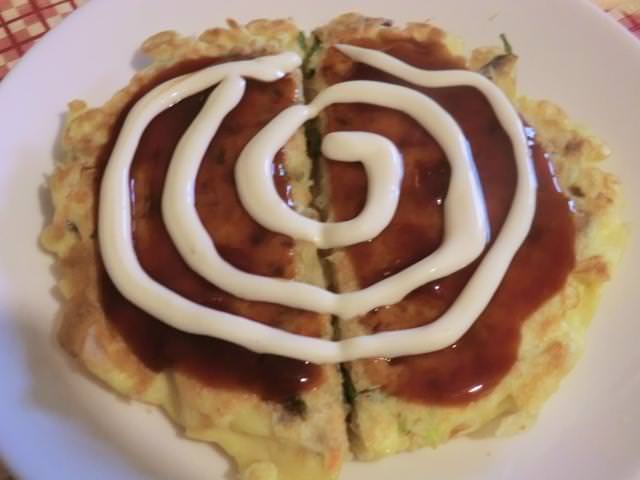 This pancake was topped with crispy bacon and diced avocado 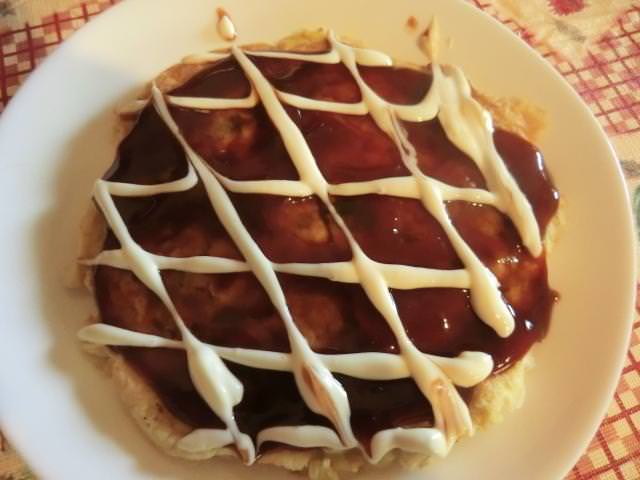 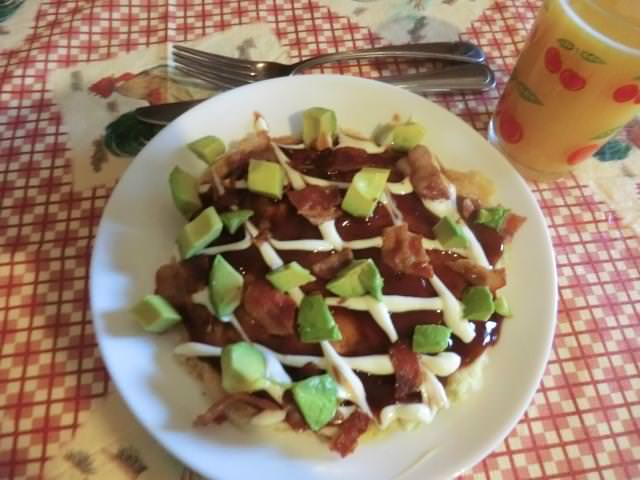 NOTE: Tonkatsu Sauce may be used instead of the Okonomiyaki sauce

Transfer the pancake to a serving dish, bacon side up. Spread the okonomiyaki sauce over the top, drizzle the top with mayonnaise in an attractive pattern. Sprinkle the seaweed over the top and the dried bonito flakes.

Cross-section of the pancakes 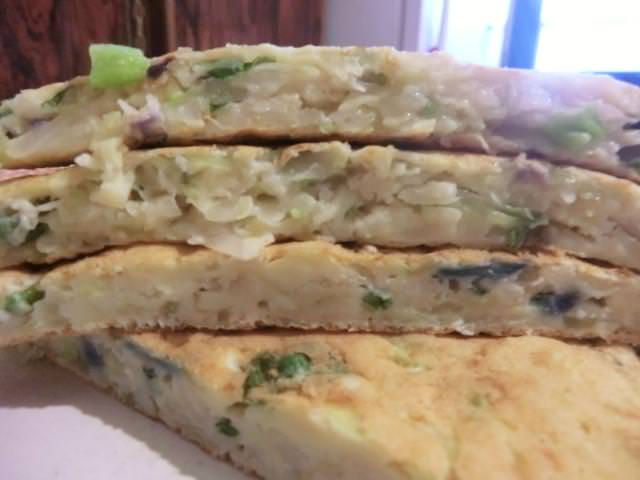 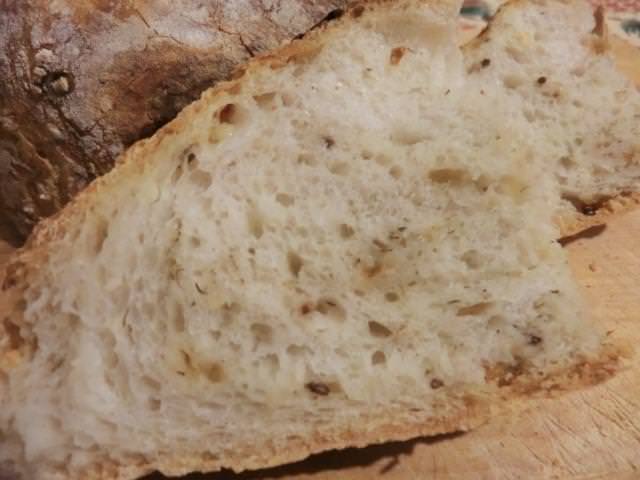 The shaped sourdough loaf was allowed to proof in a towel lined, rice flour coated, colander. To turn out into the preheated dutch oven, a parchment paper lined baking sheet was placed over the dough, FLIPPED over, and the towel removed. The loaf was scored and transferred, using the parchment paper as a sling, into the dutch oven before being baked. 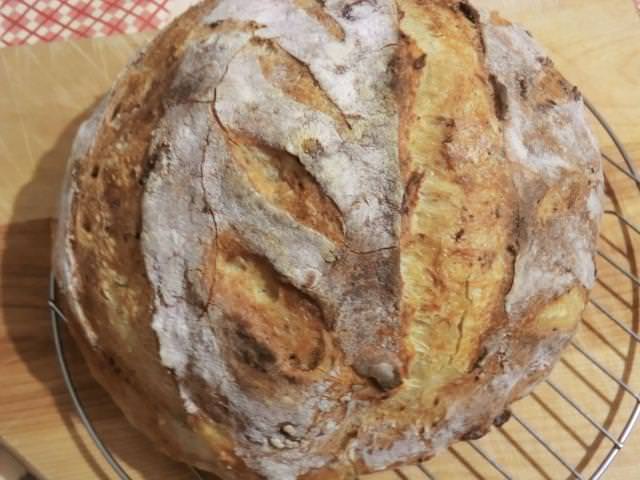 This savoury pancake is usually made with chopped fermented kimchi, but I chose to use my home made quick ‘kimchi’ instead. Kimchi-jeon is similar to another savoury cabbage pancake I make and love … Japanese okonomiyaki … in many ways. It’s also similar to the Chinese green onion/scallion pancake that I’ve made.

Since I’ve never tasted the real deal, I’m not sure what the pancake SHOULD taste like, or the general texture desired. I incorporated elements from the various recipes found on line into one cohesive recipe, for my first attempt, and posted it below. Variations are found in the type of flour used (just all purpose or all purpose and rice flour) and in the inclusion of egg. In the vegan version, the only liquid used is water. I have even seen versions in which crumbled tofu or ground meat (pork) may be incorporated into the batter. In the latter case, leftover cooked ground meat may be used or the raw meat may be added directly to the batter, which then needs to be cooked a bit longer, in order to cook the meat through.

Other variations are in the size of the pancake made. Smaller, individual pancakes are more convenient if one wishes to freeze some away. For a family, a single larger pancake maybe be served in the pan it was fried in and eaten ‘pull-apart’ style. Or it may be cut into wedges or squares and served ‘appetizer’ style. A dipping sauce, similar to that used for pot stickers, is often used.

Korean Kimchi Pancake – I thought it was delicious if somewhat ‘gummy’ in texture, like the green onion pancake, even hot out of  the pan. I don’t know if that’s the way it’s supposed to be. I’m thinking of adding some baking powder to the pancake next time, as is done with the okonomiyaki, so it puffs up more. 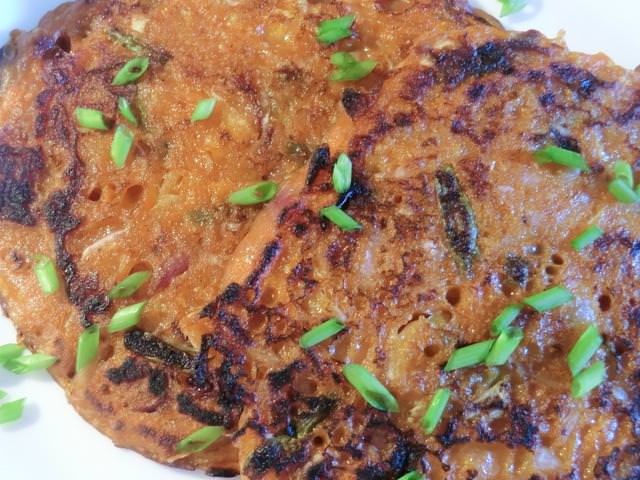 Since the ‘kimchi’ that I made earlier was fairly dry, I made a kimchi ‘juice’ to incorporate into the batter for the pancakes.

Mise en place for the pancakes 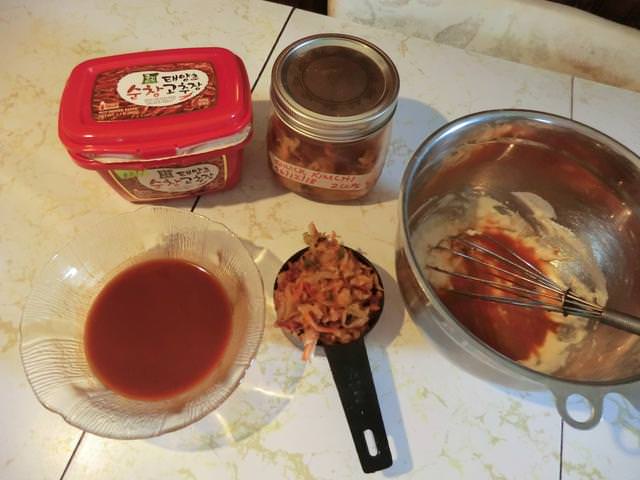 Briefly whisk together the flour, water and kimchi juice. Fold in the kimchi and green onion tops. If the batter seems very thick, add the reserved tablespoon of water and stir through gently just until mixed in. (Stirring too long will develop gluten and may make your pancake tough.) Add additional water if needed, one tablespoon at a time.

Place a large cast iron frying pan on the stove and preheat at medium/medium-high. Add one tablespoon vegetable oil to the pan and, when hot, ladle about 1/4 cup of the pancake batter in a small mound on the pan, patting out to about 4 inches in diameter. Depending on the size of your pan, you should be able to fit 3-4 pancakes into the pan at a time. (If you’re not confident about cooking so many pancakes at one time, feel free to make them individually, adjusting the heat level as needed.) 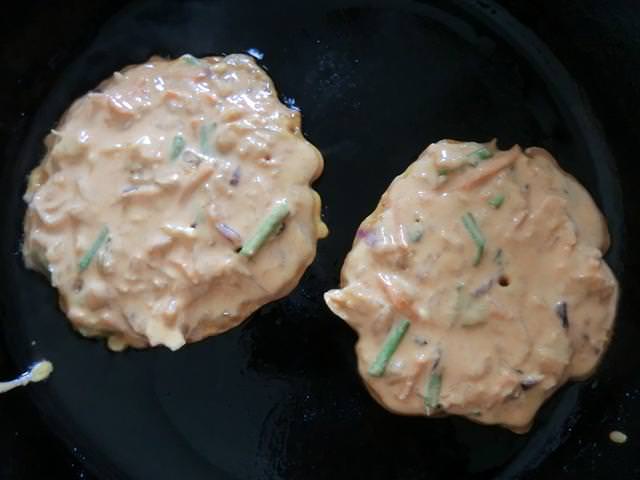 When the pancakes seem almost totally set, flip over to the other side and cook until the second side is set. Then flip again, and finish cooking the first side for another minute. (NOTE: You want SOME charring but you don’t want to burn your pancakes. The sugar in the batter contributes to that charring. Start your pancakes on medium heat if you know your pan heats quickly and retains the heat. You can always turn it up a bit or cook the pancakes longer, if needed.)

** For my first attempt, I only added 1 tbsp of the gochujang to the juice. It was pretty spicy but tasty. I wouldn’t add more.

Whisk together and use as needed. The excess may be poured over the remaining quick ‘kimchi’.

Mix together until the sugar dissolves. Taste. If needed add more vinegar, soy sauce or sugar. Sprinkle some sliced green onions and/or sesame seeds on top … just to make it look pretty. 🙂 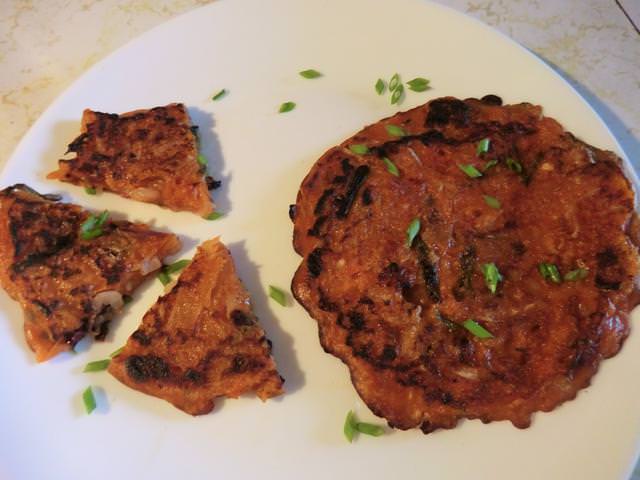