Making perogies from scratch isn’t as challenging as you’d think.

And they were delicious.

But sometimes you just don’t have the time or energy to make them so you buy a bag of the frozen ones, especially when they’re on sale.

The default way to serve perogies is boiled, sauteed in butter/olive oil until golden brown 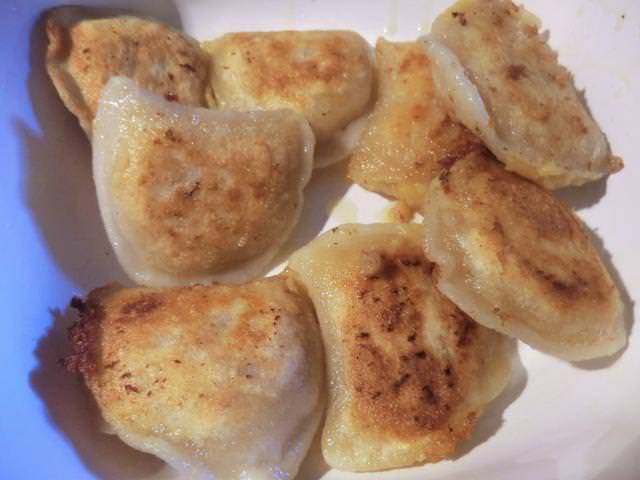 … and then topped with sauteed onions, crispy bacon and sour cream. A sprinkling of thinly sliced green onion for colour (and so you can pretend there’s something fresh and healthy on your plate). 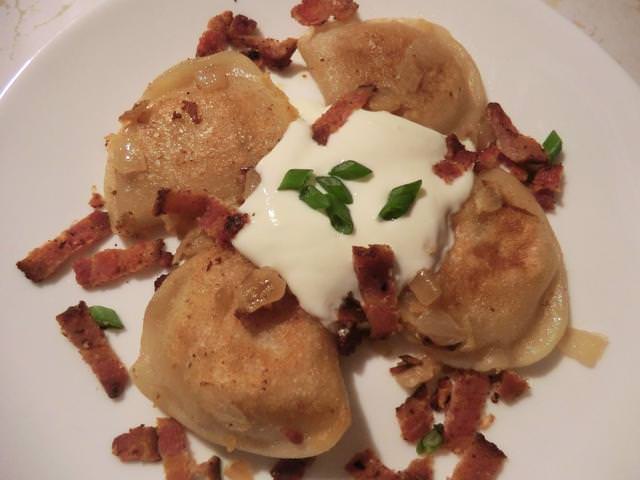 But, you may want to switch things up every once in a while.

Home made or canned chili is a great topping. 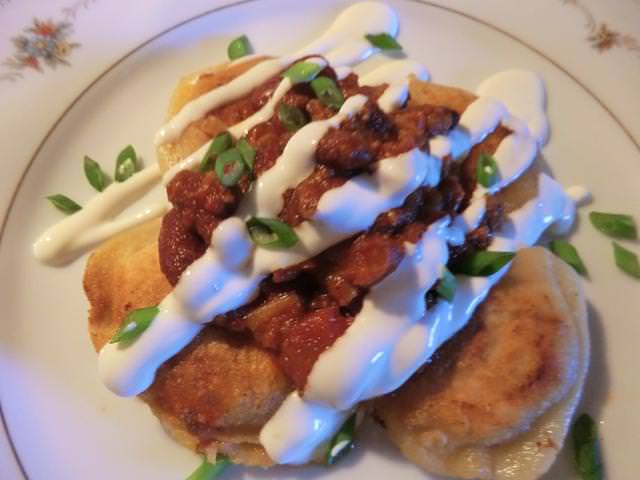 Or bolognese. Or a duck ragu. How do you serve YOUR perogies?

And, because my strawberries were getting past the peak of their freshness … I pureed the remainder and made a fresh strawberry margarita. (If my blender was able to grind up ice, I’d have the slushy version of this delicious drink which I first had at the Regal Constellation in Toronto at a Toronto Trek convention.)

Coincidentally, it’s a nice Cinco de Mayo drink if you want something sweet. 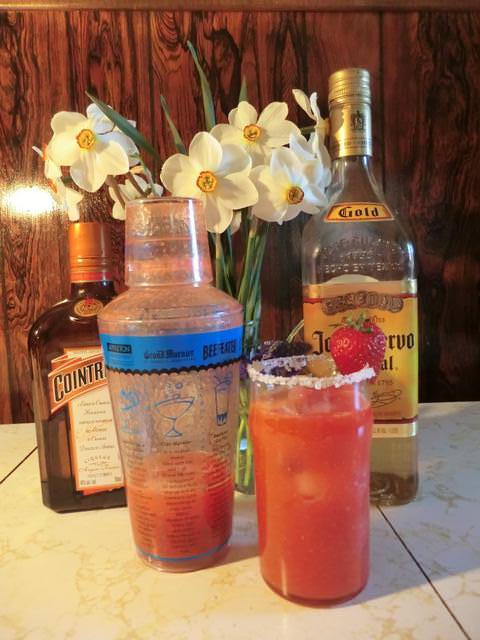 Run a lime wedge around the rim of a tall glass, or a champagne coupe glass. Dip the glass into a shallow bowl with coarse salt (or sugar), to create a decorative rim. Set aside the glass.

Add all of the above ingredients, excepting the garnishes, to a blender and puree. Taste and add more lime juice or honey, to taste. Strain through a coarse strainer to make sure any chunks are gone.

Add a few ice cubes to a shaker, pour the margarita over the top, shake for a minute or two and then strain into the salt rimmed glass. Garnish with a fresh strawberry that you’ve cut a slit into from the base, and/or a lime wedge.

There were a few dishes that my mother rarely, or never, made when I was growing up. Pierogies were one of them. Oh, she’d make the occasional Romanian “Gomboti cu prune” which my SIL identified as “Szilvas Gomboc” (Hungarian Plum Dumplings) for us, but I never remember eating the savoury version.

I always thought they’d be a huge amount of work so, over the years, I’ve bought the bags of frozen pierogies from the grocery store and boiled and pan fried them at home with diced onions, and served them with a heaping spoonful of sour cream.

I know that FB can be a waste of time/distraction, but one takes food inspiration wherever it’s found, and the recent flood of pierogi posts inspired ME to make a batch. (By the way, prime rib posts have been popping up in my FB cooking groups, like mushrooms after a rain. I don’t want to say that MY Christmas menu post has been the inspiration, but you can draw your own conclusion.)

I used a potato, caramelized onion and cream cheese filling … cause I had caramelized onions and the cream cheese in the fridge. I don’t know when/if I’ll make them again, though I DO want to make gomboti, the next time I find some plums at the grocery store. I think my mom used sour plums but it’s been a long time since I last had them so I’ll use whatever’s available.

The recipe is a somewhat rewritten version of one I found on Youtube. They were called “Polish Pierogies” so that’s what I’m titling this post.

** I used about 1/4 cup of caramelized onions and the garlic powder, because I was too lazy to fry just the garlic.

Place peeled, quartered potatoes in a pot of cold salted water. Bring to a boil and cook until fork tender.

Meantime, brown onions & garlic in oil on med-low for 10 min.

Drain and mash the potatoes, adding onion & garlic, cream cheese, salt & pepper. (Or you can rice the potatoes into a large bowl and then add the rest of the ingredients and fork everything together.)

Set aside to cool. Shape into 1-tablespoon size mounds if desired for convenient portioning and to make the filling process go more quickly.

NOTE: I ‘quartered’ the amount of filling I had in the bowl by eye, and then scored the top of the filling with a knife. I took out the filling, a quarter at a time and rolled each quarter into a log, which I divided into 6 equal portions. Then I rolled THESE into balls. After using up half the filling, I thought the ‘balls’ were too big so on the second half, I divided each quarter of filling into 8ths. This should give you 32 generously filled pierogies rather than 24 overstuffed ones.

Combine flour & salt in a bowl. Make a well and add sour cream, egg and water, combining with a fork or metal spoon.

Place on a well-floured board and knead for 50 turns (using a scraper if needed) until smooth. Cover with a towel or inverted bowl & let rest at least 10 minutes. You can wrap the dough in food wrap and refrigerate until the next day, if you need to, though it’s a fast dough to put together the day you make your pierogies so it’s not necessary.

Fill each circle with about one tablespoon of potatoes or your filling ‘balls’, fold into a half circle, and pinch edges tightly. Place apart on a towel or baking sheet sprinkled with flour.

Place the pierogies in boiling salted water, stirring at first (with the handle of a wooden spoon so as not to pierce the pierogies) to keep them separated, and cook about 3 minutes until they rise to the top, then another 30 seconds to a minute. Remove to an oiled baking sheet. Drizzle some more oil over the top of the pierogies so they don’t dry out.

You may also freeze your unboiled pierogies on the floured sheet and then place them in freezer bags.

Saute your boiled pierogies in a pan with butter or olive oil until they’re golden and serve with caramelized onions and sour cream for a delicious treat.

You can also bake them on an oiled baking sheet in a 350 deg. F oven until lightly golden.

A beautiful accompaniment to a simple boiled ham dinner.