This is a fairly easy recipe to make and uses a combination of made-to-order and leftover items during my freezer clear-out.

The enchilada ‘sauce’ is a diluted mixture of rehydrated and pureed chiles, onion, tomato and spices which I had made as a braise for my red chile pulled pork. I ended up with some amazing tamale filling and had a couple of cups in the freezer for future cooking projects.

I used leftover sauteed red onion to flavour the ground beef and made my own corn tortillas as a base. Since the tortillas were ‘barely’ six inches in diameter, I didn’t want to try to fill and roll them up so I used them as a base on which to layer the other filling ingredients. Sort of like a Mexican lasagna. I added a couple of tablespoons of cream cheese to the meat mixture because I remember seeing it used in a chicken enchilada recipe I found on line … and I just felt like it.

Cheddar and Monterey Jack cheese happened to be the two kinds of cheese in my freezer that seemed like they would work, taste wise, in the recipe. 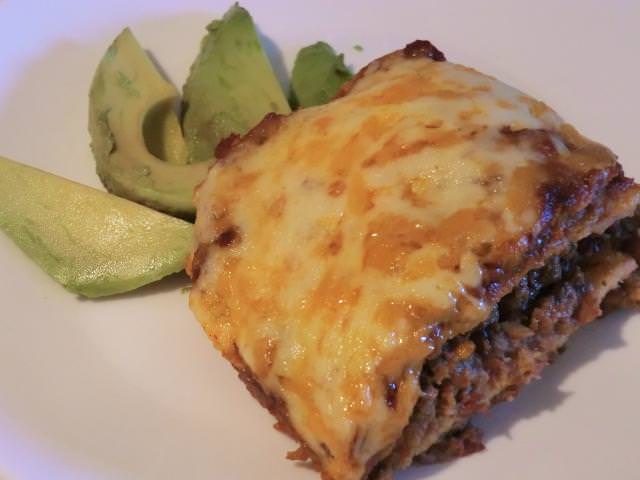 I made the enchilada bake in a disposable aluminum baking dish (7 3/4 in by 7 3/4 inch) which had been recycled enough that I was planning on discarding it after use. It saved me having to do any dish washing afterwards. For those going to a pot luck or family gathering it’s a perfect container to bake, transport and serve.

Profile of the ‘lasagna’ 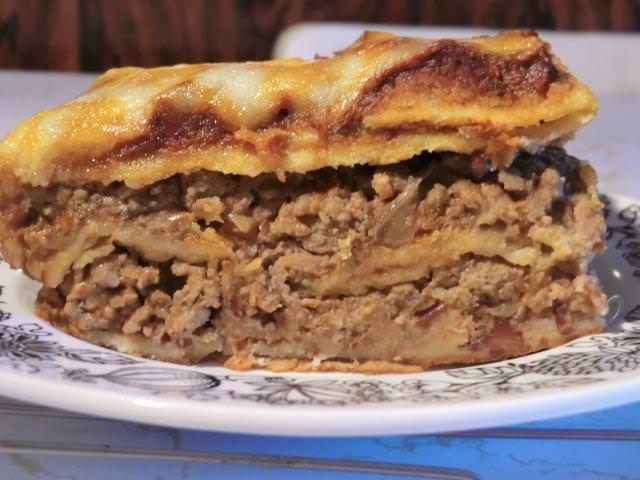 10 6 inch corn tortillas
1 cup refried beans, canned or home made
1 can (~ 1 1/2 cups) of enchilada sauce if you don’t want to make your own
1- 1 1/2 cups grated cheese (mixture of cheddar cheese and Monterey Jack)

Home made corn tortillas –  A round ball of the masa dough was placed between two 7-8 inch diameter circles of parchment paper and pressed down, as hard as possible, with an 8 inch round glass pie pan. The dough was fried, over medium heat, for a minute or a minute and a half, in a cast iron frying pan, which had been brushed with a paper towel dipped in vegetable oil. 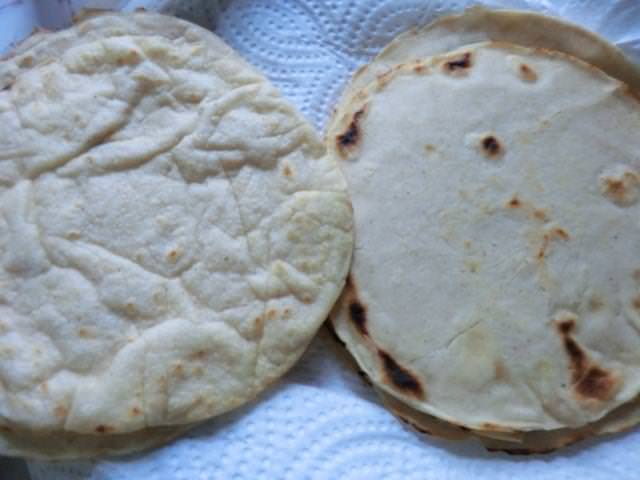 NOTE: If desired, drained and rinsed canned black beans and frozen and thawed corn, about a cup of each, may be added when layering the enchiladas. In this case, a larger baking dish would be advised.

Make a roux with the oil and flour. Cook for a few minutes in a small sauce pan, stir in the marinade and chicken stock and bring to the boil. Reduce the heat to a simmer and cook for 4-5 minutes and then let cool. You may want to add some additional stock or water to thin your sauce down so it’s spreadable. Taste for seasoning and add salt and pepper as needed. Let cool to room temperature.

Heat a large saute pan over medium high heat, add the oil and when hot, add the ground beef. Break up the ground beef and brown. Drain off any excess fat and add the sauteed red onion, cream cheese and about 1/4 cup of the enchilada sauce. Stir through until the cream cheese is melted into the sauce and it’s bubbling a bit. Taste for seasoning, adding salt and a few grinds of black pepper. Let cool while assembling the remaining ingredients and preheating the oven. 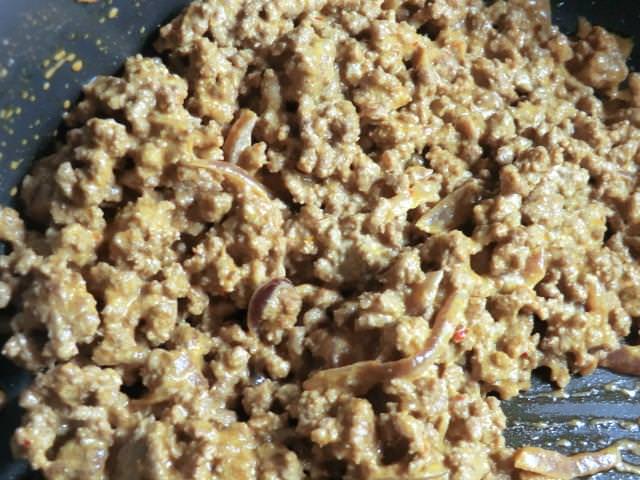 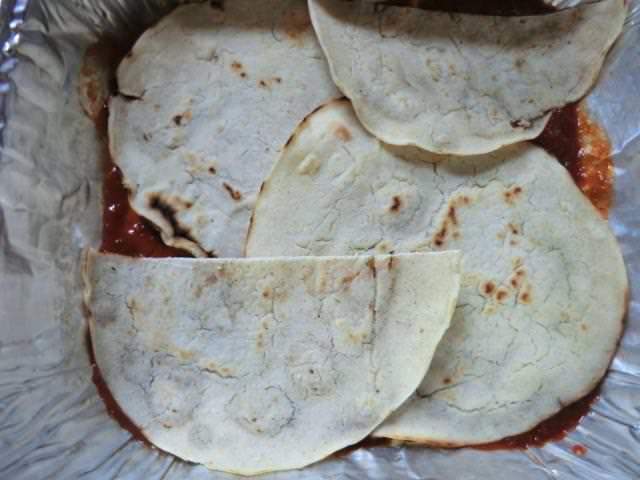 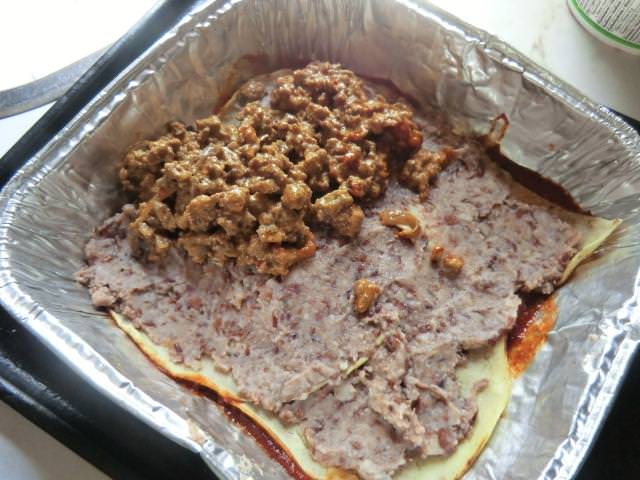 Add another layer of tortillas (two whole and the third cut in half, flipping the layout so any small missing spots from layer one would be covered and vice versa) followed by the remaining refried beans and ground beef. 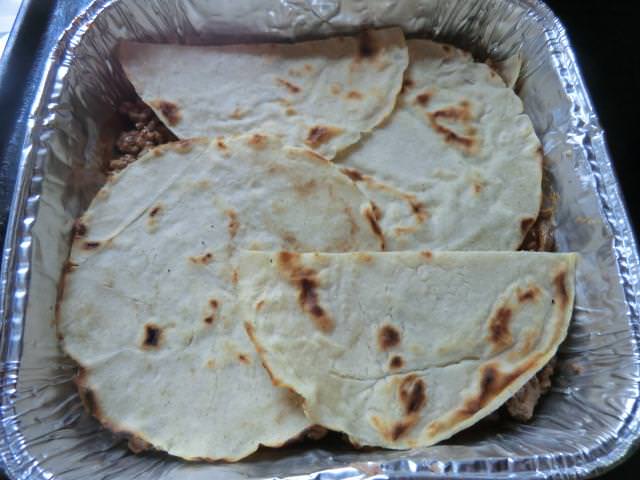 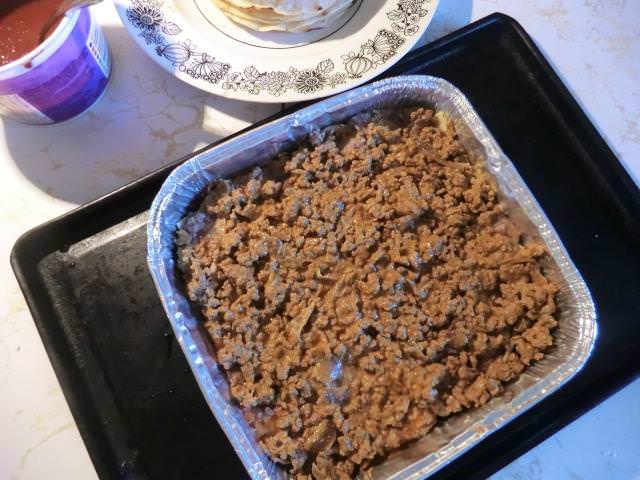 Top with a final layer of corn tortillas. (For the sake of aesthetics, I used four whole tortillas for the top layer though three would have been plenty.) Pour the remaining enchilada sauce over the top. Cover the baking dish tightly with aluminum foil and place the baking dish on a baking sheet for ease of transport and as a support for the flimsier aluminum baking dish. 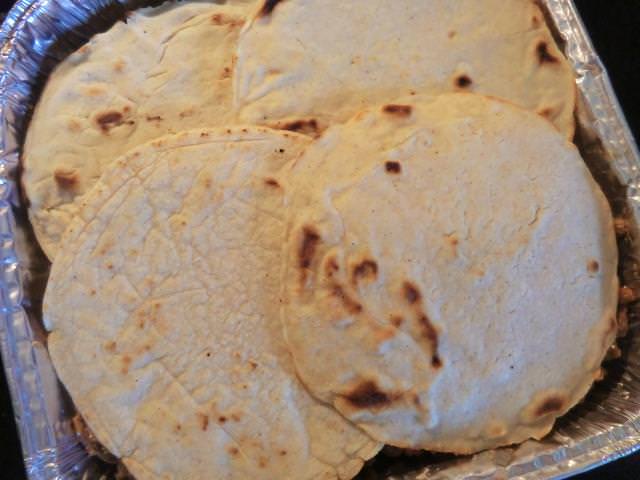 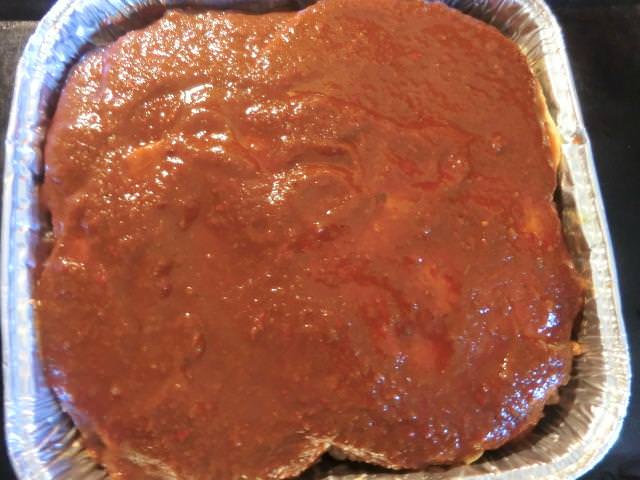 Remove the foil, top with as much grated cheese as desired, return to the oven and continue baking uncovered for another 10-15 minutes until the cheese is melted and bubbling. 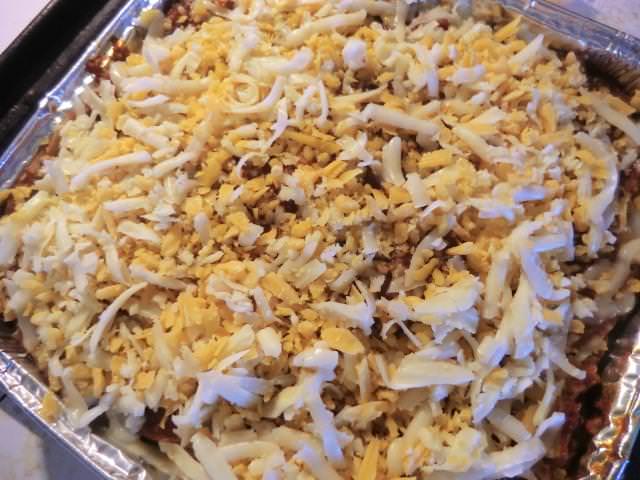 Let cool for 10-15 minutes to set the layers and make cutting and serving neater. Serve with desired garnishes. 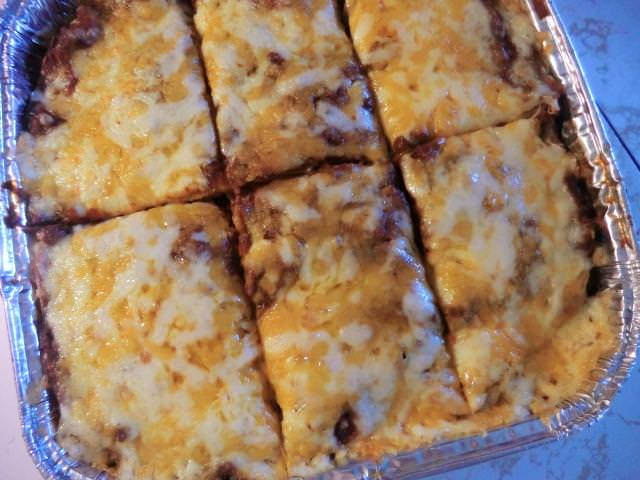 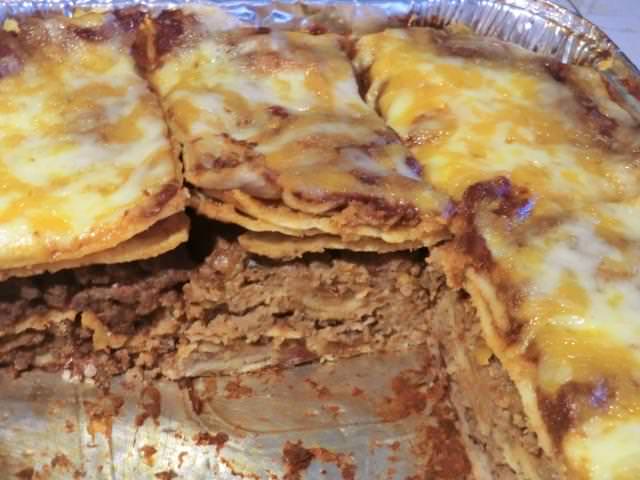 I haven’t made tamales in some time but a craving, a trip to the local Mexican grocery store for various types of chiles, and the timely sale of boneless pork loin, meant that I decided to invest a hot weekend in the second half of August (and an efficient A/C system), on making a batch of red pulled pork. The vegetarian option came about due to a large sweet potato that had been languishing in my basement for a couple of weeks and most of a can of black beans in the freezer.

The basic masa recipe can be found here. The red pulled pork recipe is here.

** I added canned tomatoes and the dried minced onion as that’s what I had. I had made red pulled pork the day before with pureed chiles, onion and pepper and after straining the braising liquid, I added a couple of tablespoons to the filling below. Chile powder or cumin may be added if desired for a bit of smoky flavour.

In a medium sized saute pan, over medium heat, add a teaspoon of vegetable oil and the diced onion and saute until soft and translucent. Add the diced tomato and cook for 10-15 minutes until the tomato has broken down but the mixture still has a bit of moisture in it. (If using the dried minced onion, just add a splash of oil, your diced tomato and cook until the onion is rehydrated.)

Add the black beans, corn and sweet potato. Stir through to combine. Taste for seasoning. Add a bit more salt if needed.

And if you have leftover pulled pork, give this quick pizza try.