For some reason, I never shared the results of a recent experiment in turning a relatively tough eye of round roast into a more tender piece of beef. The technique of ‘velveting’ is practiced in Chinese restaurants and is used for both beef and chicken dishes. I velveted in water, not oil, because I wasn’t comfortable with the idea of the latter, nor did I want to waste the oil. I’m frugal that way.

For the spicy beef dish below, I used the recipe/technique found on the YouTube video here. The ingredient list and amounts I used are listed in the bare bones recipe below. 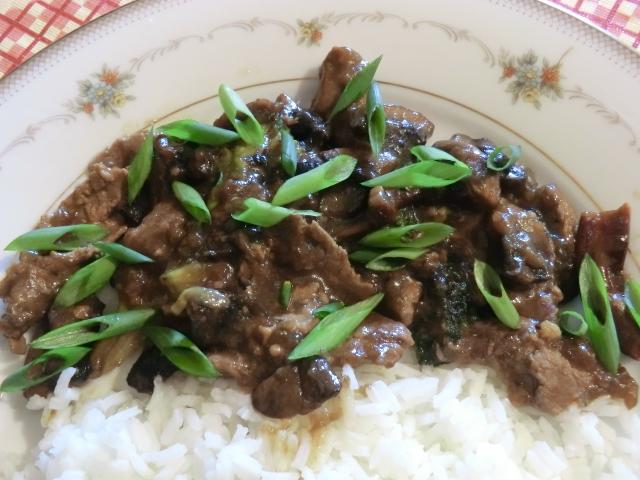 After marinating the meat 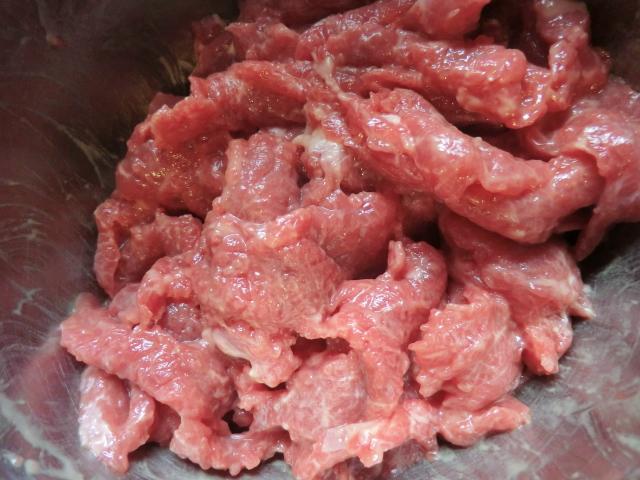 How to Velvet Meat – yields 2 cups

In a bowl, combine egg white, Chinese wine, oil, cornstarch and salt. Whisk together until smooth and frothy. Add meat and marinate in the refrigerator for about 30 minutes. In a colander, drain meat.

In a pot over high heat, combine about 2-inch deep of water and 1 tablespoon of oil. Bring to a boil. Reduce heat to medium low and immediately add meat, stirring to disperse. Bring water back to a gentle simmer and once it’s barely bubbling, continue to cook meat for about 1 minute, stirring occasionally. With a slotted spoon, remove meat from pot and drain well.

NOTE: You’ll want to velvet the meat in two or three batches making sure that you add the meat slices a few at a time, rather than in clumps, so they don’t stick but float freely in the pot of water.

After velveting in water and the stir fry 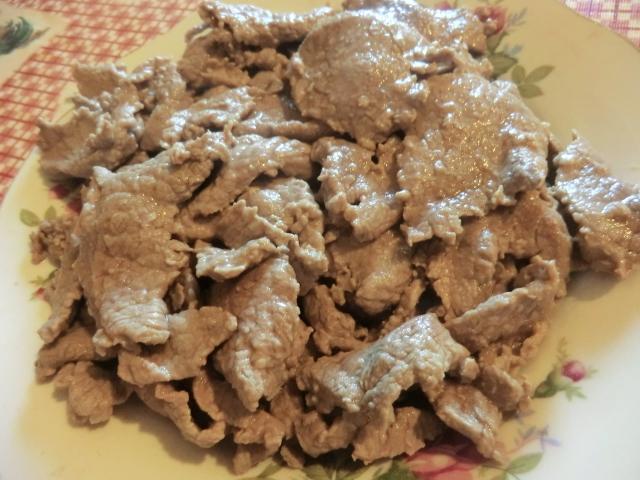 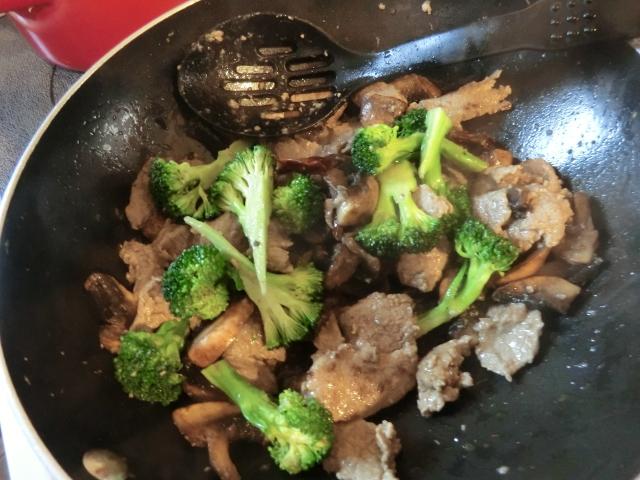 Review of the Velveting Technique: While delicious and noticeably more tender than previous attempts at the dish using the same cut of beef, WITHOUT velveting, the beef wasn’t quite as meltingly tender as the beef I’ve eaten in Chinese restaurants. I think the technique and dish will continue to be a work in progress.

I haven’t made a pie in ages but the various flyer sales for stone fruits (nectarines, peaches and plums) tempted me and so I scoped out what was available. I ended up going to Food Basic and picking up a clamshell of nectarines cause I had a bad experience with last year’s basket of peaches. They were firm but not as sweet as I would have liked and I had to guess-timate how much sugar to add. I erred on the side of caution. With a scoop of ice cream the result was perfect but it was a bit tart on its own.

The next question was … which of several pie crust recipes should I use. I went with the one on the Crisco vegetable shortening package, though I replaced half the shortening with unsalted butter. The recipe makes enough pastry for a single double crust pie, but I made two minis in disposable aluminum pie tins instead.

** What I used this time

2 – 2 1/2 nectarines per mini pie shell
1 tbsp sugar per nectarine (if the fruit is fully sweet, reduce to 2 tbsp per each 3 nectarines)
1/2 tbsp cornstarch** per nectarine
pinch of salt

** If planning to freeze baked tart, use flour, otherwise, use cornstarch. For every 1 tbsp of cornstarch, you’ll need to use about 3 tbsp of flour. Also, cook whatever you’re thickening a few minutes longer to get rid of the raw flavor of the flour. Baking should take care of that issue. Plus, the filling will be more matte than glossy when using flour.

The remaining pastry became a savoury tart with broccoli, Canadian (peameal) bacon and cheddar cheese. No waste at all. Though I still have five nectarines in the fridge to deal with.

NOTE: For a filling recipe, I used the same amounts and timing as in an earlier quiche recipe baked in the same ceramic pan. Pre-baking the crust is advised.

I hate wasting food, but for some reason, I seem to be discarding broccoli stems. Just one stem and a few florettes and you have a delicious addition to a plain cheese souffle. This is a variation of my basic cheese souffle recipe for two. Over the years, I’ve made it with leftover shredded salmon, spinach, sauteed mushrooms and various cheeses.

Unlike the usual souffle recipe, in which the eggs are separated and the eggs whites are beaten until stiff and then folded into the souffle mixture, whole, beaten eggs are added in this version. The souffle won’t rise as much as the regular method, and will fall quicker, but you can make the souffles, bake one and refrigerate the second one for the next day.

If you don’t like the strong taste of blue cheese, replace the 2 oz of blue cheese with 1 oz grated Parmesan and 1 oz crumbled blue cheese. I used a generous pinch of dried thyme instead of the chives.

Broccoli is a great price these days, so I bought a bundle and paired it with chicken for a Chinese stir fry with noodles.

I winged this dish so writing up the recipe below was as accurate as I could make it, a few hours after the fact. If anything doesn’t make sense, please let me know.

Cut the chicken breast into 1/2 inch slices and dice into 1 inch cubes.

In a bowl, add diced chicken, 2 tbsp soy sauce, 1 tsp cornstarch, hoisin, mirin, sugar, rice wine vinegar, sesame oil, half the ginger and half the garlic, white pepper and the white part of the green onion. Mix together and refrigerate overnight or for about 15-20 minutes at room temperature.

In a large saute pan, heat vegetable oil over medium high heat, add the remaining ginger, garlic and red pepper flakes, broccoli and salt and saute for a few minutes. Add 1/4 cup water, cover and steam for 2 minutes until broccoli is still green and slightly crunchy. Transfer the broccoli, ginger and garlic to a bowl and reserve.

Drain the marinaded chicken and reserve the liquid. Add the drained chicken to the hot saute pan and saute for a few minutes until it’s no longer pink. Stir often so the chicken doesn’t stick.

In a small bowl, mix the remaining tablespoon of cornstarch with 1/4 cup of water and reserve.

Reduce the heat to medium and add the reserved marinade, the remaining tablespoon of soy sauce, the broccoli and the cornstarch mixture above. Stir through and cook until the sauce thickens and coats the meat and broccoli.

Add the hot, drained noodles and the green part of the onion and stir through to coat the noodles.

Taste for salt level. If needed, add some soy sauce and serve.

I’ve made quiches with at least three different pie crust bases (Zsuzsa’s pie crust, Allison’s Vinegar pie crust and Ann’s No-fail pie crust, which I used here and posted below). I’ve even made a crustless version. But whatever the base, and whatever the filling you are using, quiche is a tasty, relatively inexpensive dish to make ahead, freeze and serve at your convenience. Or, pre-bake a few pie shells and freeze them away for when inspiration strikes.

ETA: I was sure I had made a salmon quiche but I couldn’t find the post. Guess that’s something I should remedy soon.

The quiche below is a simple version with leftover ham (and crispy bacon) from yesterday’s ham and potato soup, broccoli florettes and Canadian Swiss cheese. At $12.99 a pound, it’s cheaper than its imported cousin, Gruyere ($21.99 per pound), but nowhere near the sale price of cheddar ($4.99 a pound). Use whatever you like or what your budget allows for. I didn’t have any mushrooms in the house so I just increased the amount of broccoli I used a bit.

Preheat oven to 350°F. Place the baking dish with the pre-baked shell on a baking sheet, in case of overflow.

In a large bowl, whisk (or beat with a fork) together the eggs. Stir in the flour, mixing well, and then add the milk and nutmeg. Add salt and pepper to taste remembering that the ham, bacon and cheese already have some salt in them. Add as much tabasco or hot sauce as desired.

Layer the cooked broccoli, mushrooms and ham into the pre-baked pie shell.

Sprinkle about 3/4 cup of the cheese over the vegetables and meat.

Pour the milk and egg mixture carefully over the ingredients. Sprinkle the rest of the cheese on top.

Sift dry ingredients together in a large bowl. Cut in the shortening with a pastry blender.

In a 2 cup measuring cup beat together the egg and sour cream and add enough cold water to make a total of 3/4 cup liquid. Stir the liquid into the dough using a fork. If a hand full of dough holds together when squeezed, the dough is wet enough, otherwise, fork in an additional tablespoon of water and try again. Repeat.

Wrap in saran wrap and refrigerate until needed or roll to 1/4″ thickness.

I was a bit hasty in throwing together the dough for the pie plate … I should probably have re-rolled it. 🙂

If the edges get too brown, cover them with a strip of aluminum foil.

Remove the baked pie from the oven to a cooling rack and let cool for about 3 hrs before serving.