I came home last week with a tray of four skinless, bone-in chicken breasts and decided to include them in an Indian menu that I had planned for the weekend.

I was originally going to make a chicken curry/biryani but switched over to chicken tikka instead. Two chunks of spicy and tender chicken are often part of an appetizer combo, along with a couple of samosas and a couple of pakoras, but I threaded five onto soaked bamboo skewers and turned them into a main dish. The spiciness of the tikkas are toned down by serving them with a minty yogurt dip (raita). 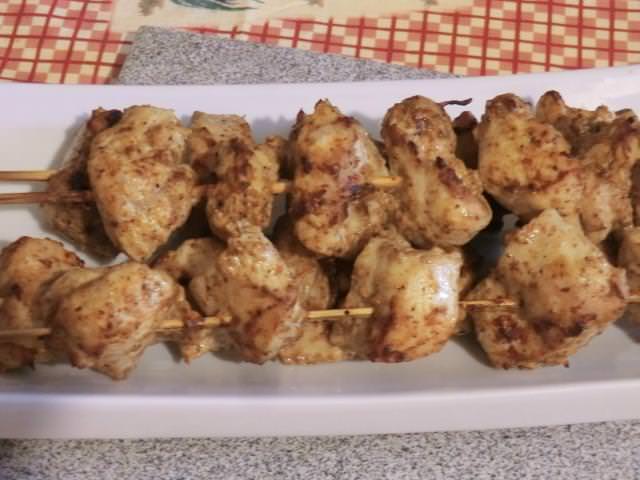 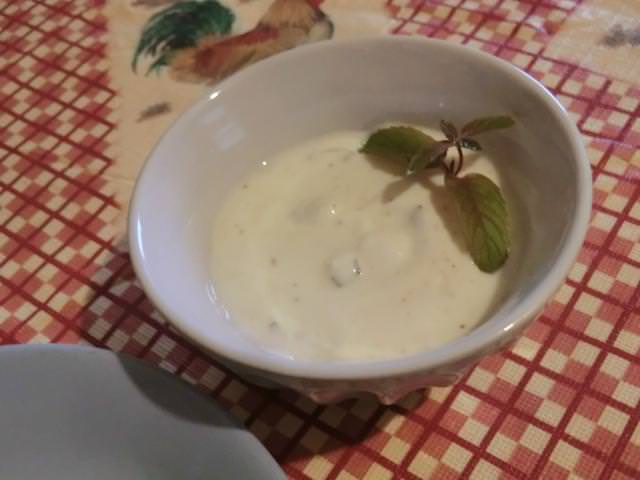 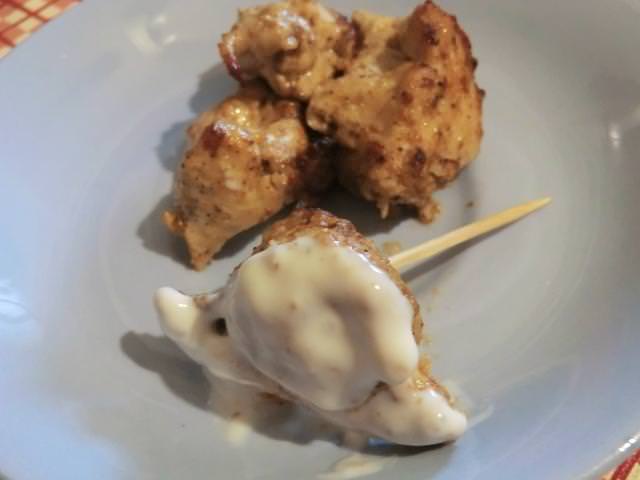 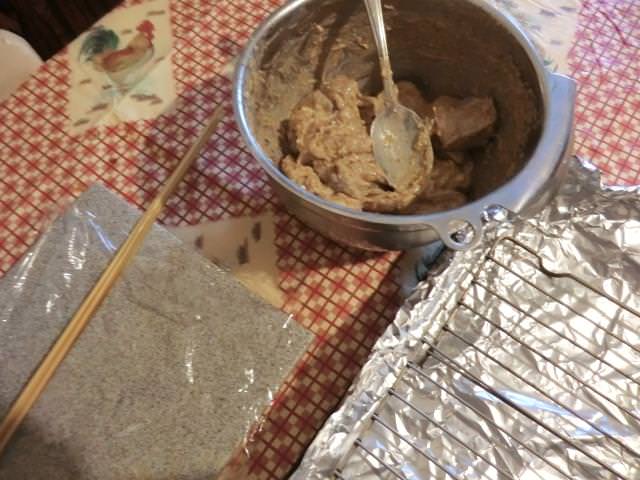 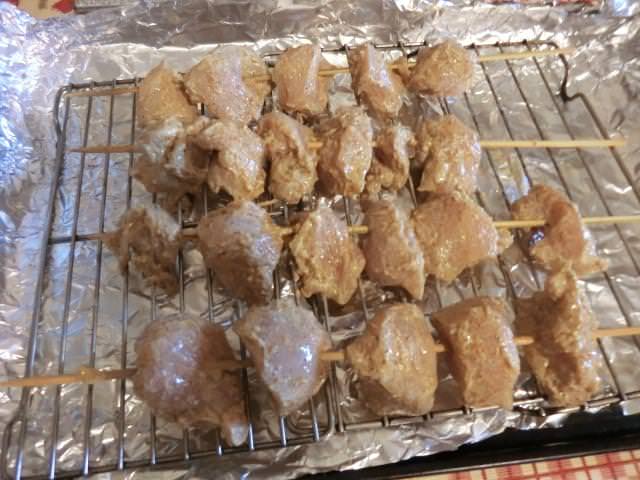 Since this is a ‘dry’ dish, I made a couple of ‘wet’ dishes … matar paneer (pea and paneer cheese curry) … 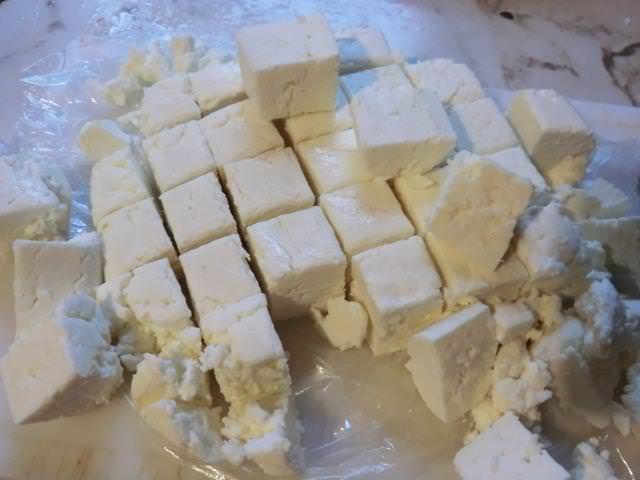 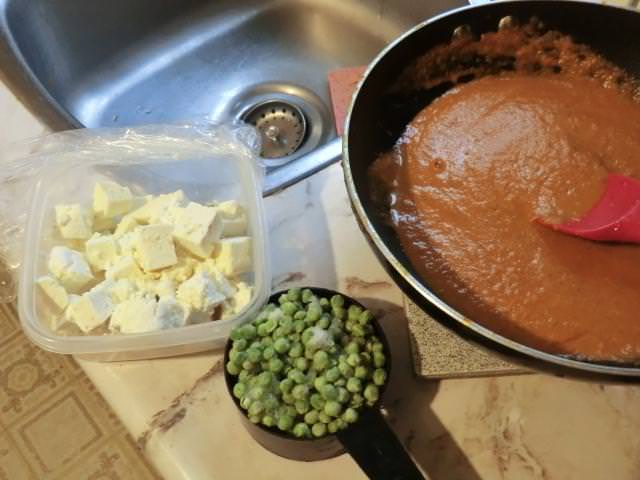 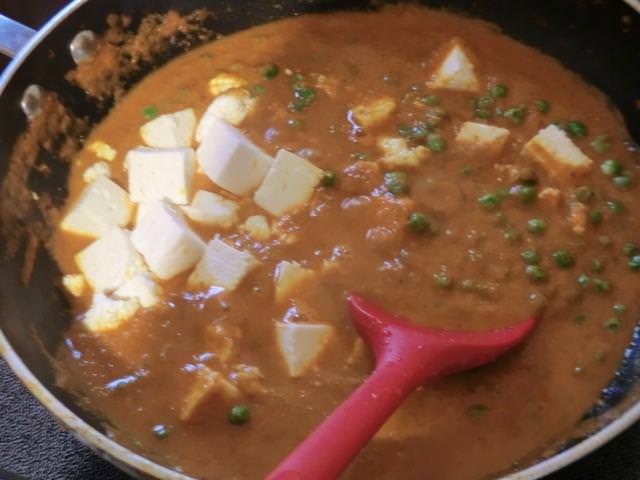 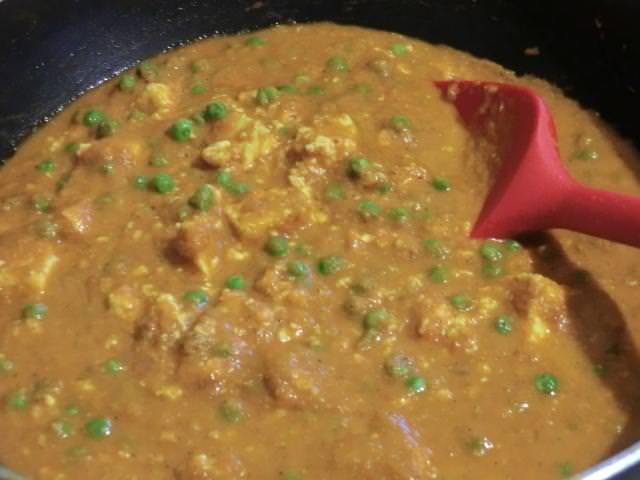 … and a vegetarian chana masala (chickpea curry) … to go with it. 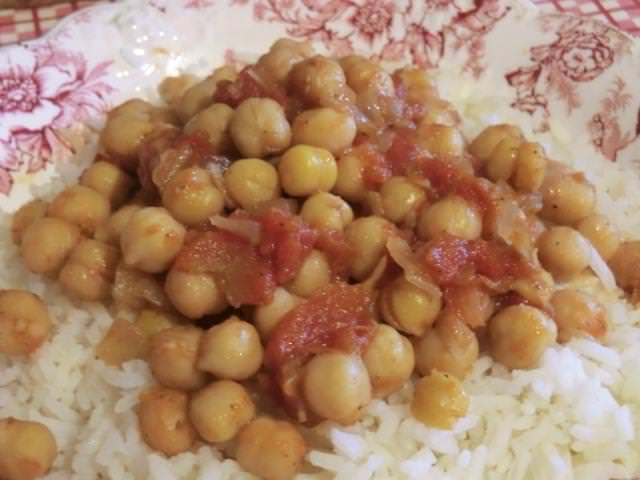 For a bread, I made aloo paratha, spiced mashed potato mixture stuffed into a whole wheat flatbread. Because I’m not fond of all whole wheat breads, I used (a bit more than) half all purpose flour and half whole wheat. And, I halved the recipe I found on line to only make four parathas. Because I didn’t have any fresh coriander leaves called for in the recipe, I defrosted some thinly sliced green onion tops and added them in their place. 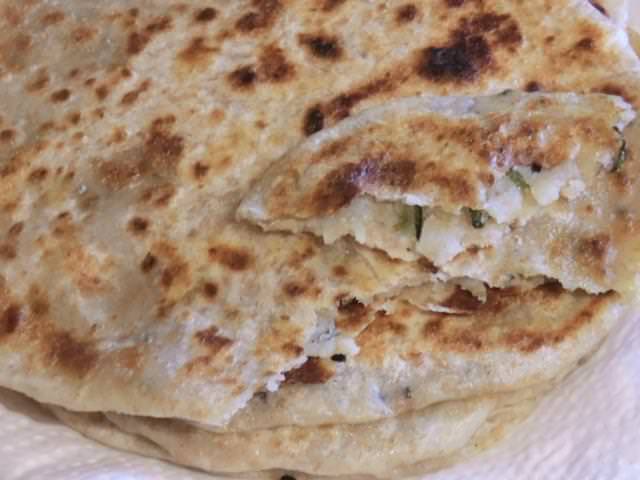 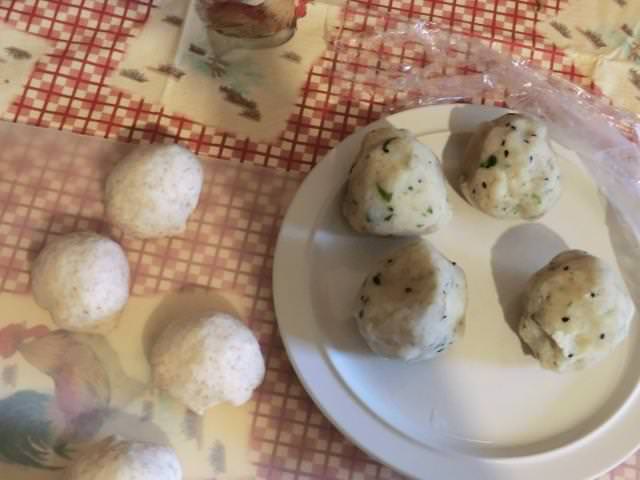 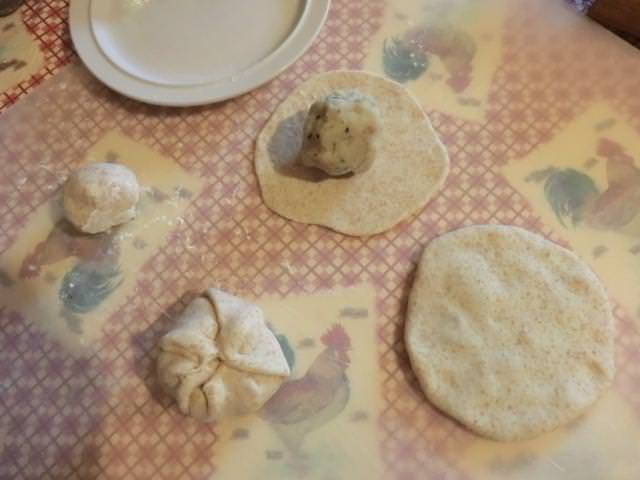 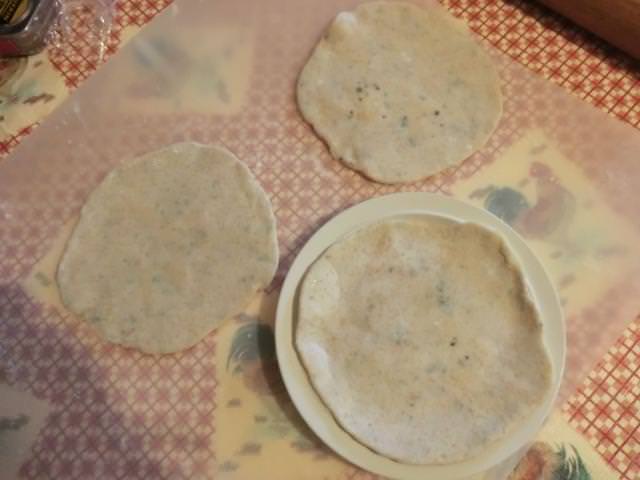 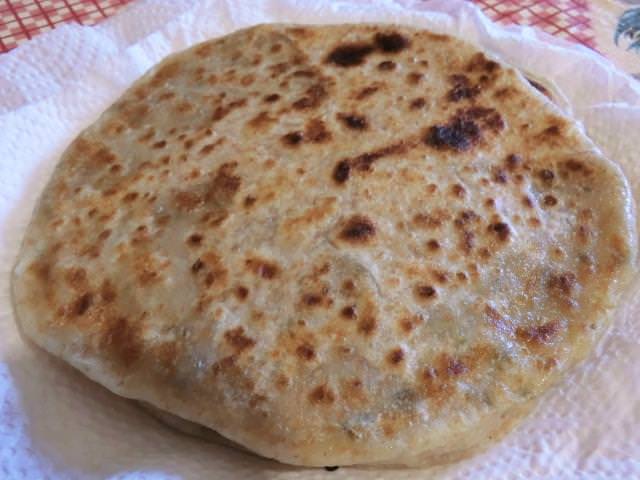 And, of course, I made some basmati rice to sop up all that tasty sauce. Plain because I was tired and couldn’t be bothered coming up with anything more elaborate.

To use up the rest of the chicken, rather than freezing it away, I took the largest of the chicken breasts, took it off the bone and spread the top with about a teaspoon of Hellman’s mayonnaise. Then, the mayonnaise coated breast was dipped into a few tablespoons of Italian seasoned breadcrumbs. I roasted the breast along with all four of the ribs. Since I left quite a bit of meat on the ribs, I let them cool and then put them in a freezer bag. Later in the week or the week after that, I’ll make a small (four cup) batch of chicken stock with the ribs and use them in a pot of chicken noodle soup. I even have egg noodles in the pantry to add to the soup.

Since the boneless breast was so large (~350 gm) I cut it in half and will have two meals. 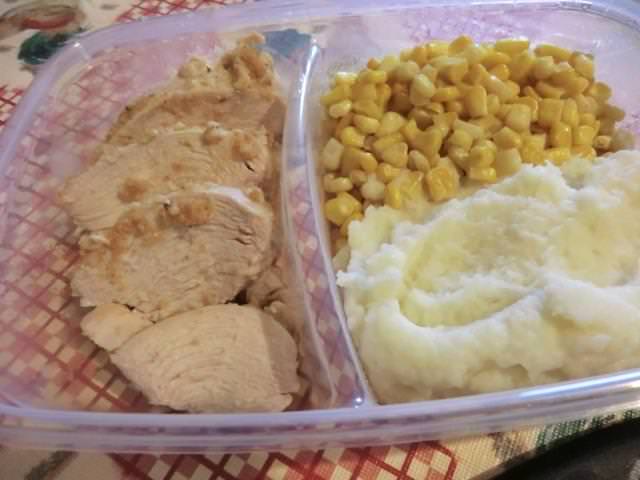 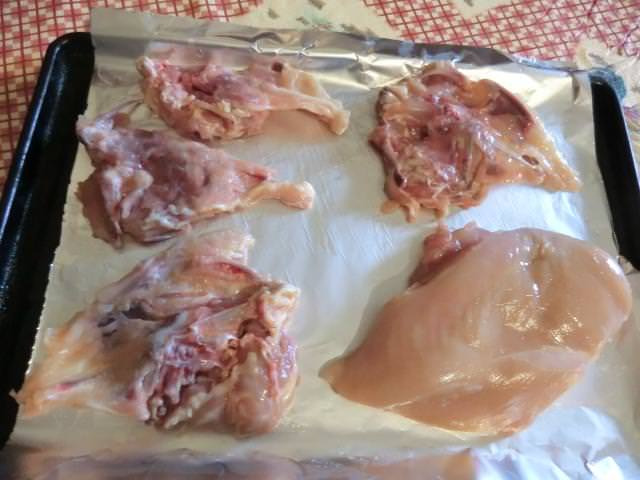 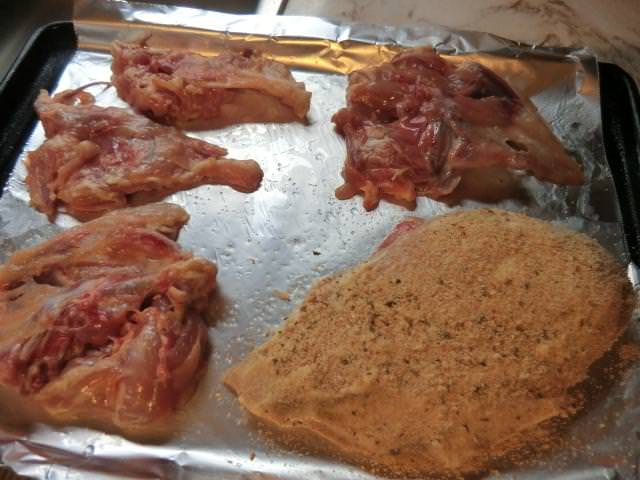 The smaller breast and other trimmings were ground up (I had about 400 gms of meat) and turned into three chicken patties/burgers. 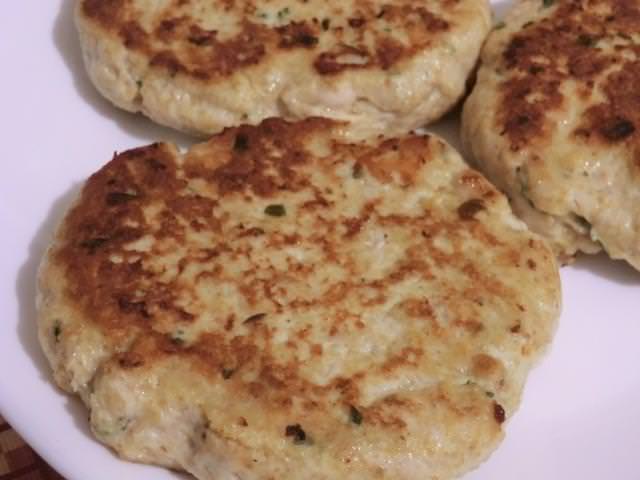 Pretty economical for an investment of $6.35 and some time.