Rarely have I made a dish that was as satisfying in the preparation as it was in tasting the finished product.

Chicken and dumplings is a hearty comfort dish … a glorious chicken stew with a creamy texture filled with tender shredded chicken and vegetables. The ‘dumplings’ may be either drop biscuits, which I’ve made before, or rolled noodles. In both cases, the starch is added to the stew in the last 10-15 minutes and cooked. Achieving the perfect balance of dumplings/noodles and stew may be a challenge. On my first attempt I didn’t account for the amount of stock that would be absorbed by the dumplings during steaming. The result was unsatisfyingly dry even if the dish itself was delicious.

This trial was perfection. (I had extra stock in reserve, just in case.) 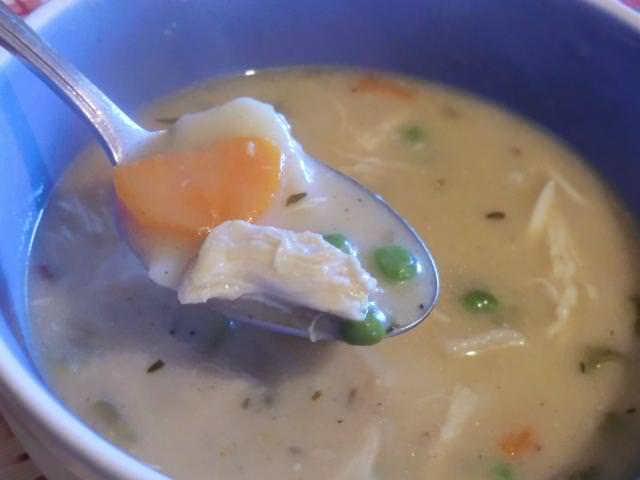 I started with a whole fresh Prime chicken, bought on sale at my local Freshco, and meant for roasting. After cutting the chicken into pieces, I used the two breasts, wing tips and the back for making the stock. The two legs and the wings were set aside for roasting. 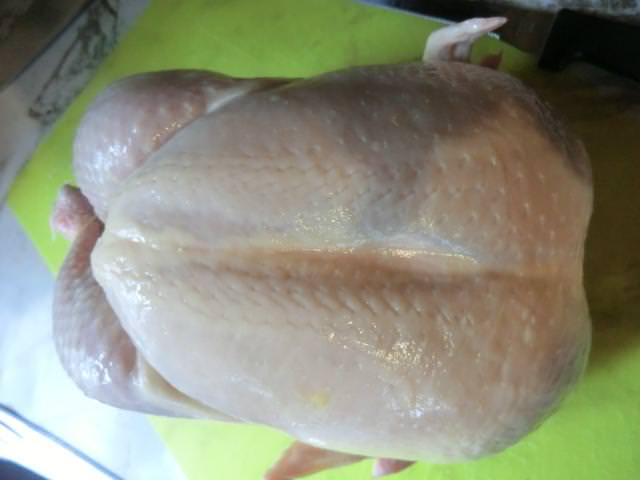 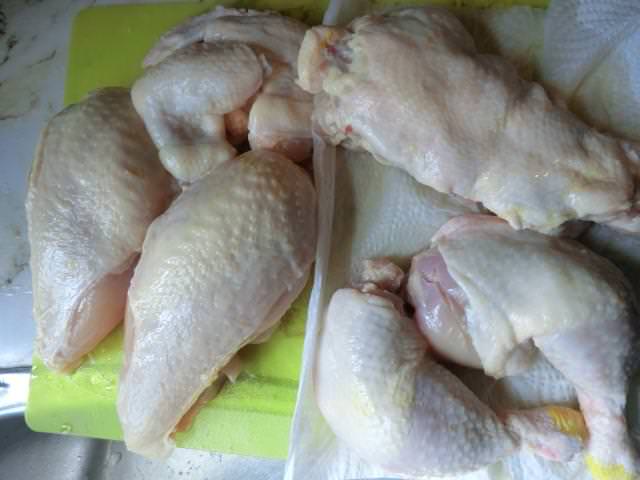 The recipe I used was one I found on YouTube for “Old Fashioned Chicken and Dumplings”. It was based on an Emeril Lagasse recipe according to the accreditation given there. After reading the comments, I halved the amount of roux (1/4 cup butter and 1/3 cup flour) I added to the stew, because I didn’t want it to be overly thick to start with. And, since I knew there were going to be leftovers, I didn’t want the inevitable thickening to adversely affect the dish.

I rewrote the recipe and am sharing it here in case anyone has difficulties accessing the version on YouTube.

Old Fashioned Chicken and Dumplings – serves 4-6
Adapted from an Emeril Lagasse recipe for chicken and dumplings.

* I used two split, bone in chicken breasts, the back and the tips of the two wings

** I didn’t have any onions so I used the white part of four green onions, sliced about 1/3 of an inch thick which gave me about 1/4 cup of onions.

*** I thought that the amount of roux used made the chicken and dumplings look too thick in the video so I reduced the butter to 1/4 cup and the flour to 1/3 cup.

In a large pot or dutch oven, add in the chicken, water, salt and bay leaves. Bring to a medium boil, skimming off the scum as it rises to the surface, cover and cook over medium heat for 45 minutes. Don’t boil too hard, or too much water will evaporate. (NOTE: You can cover the pot and avoid the issue altogether.)

Prepare the vegetables and dumplings while this is happening.

Shredding the cooked chicken/adding the veggies

After the chicken has cooked for 45 minutes, remove it to a plate and let cool before shredding. Discard the skin and bones. Remove the bay leaves from the stock and discard.

Add in the chopped vegetables and cook for 10 minutes. 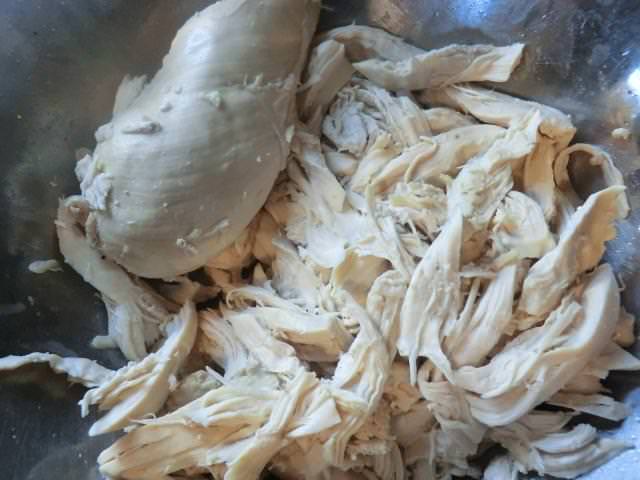 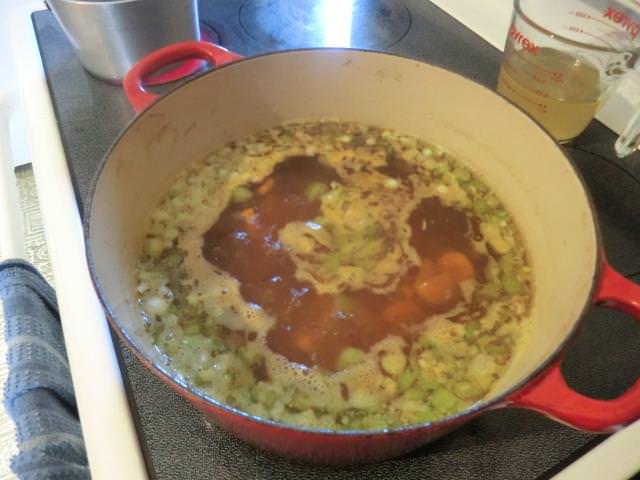 In a glass measuring cup, heat the milk and butter just until butter is melted. In a medium bowl, combine flour, baking powder and salt. Add in the milk and butter mixture and stir with a fork just until combined. Dough should be soft. Turn out onto a floured surface and knead just a few times to make it come together. Don’t over knead or your noodles will be tough. Roll out the dough to 1/8″ thick and cut into 1″ strips and then into 3-4″ pieces. If you think you’ll be waiting for more than 5 minutes or so to add the noodles, cover them with a damp towel. 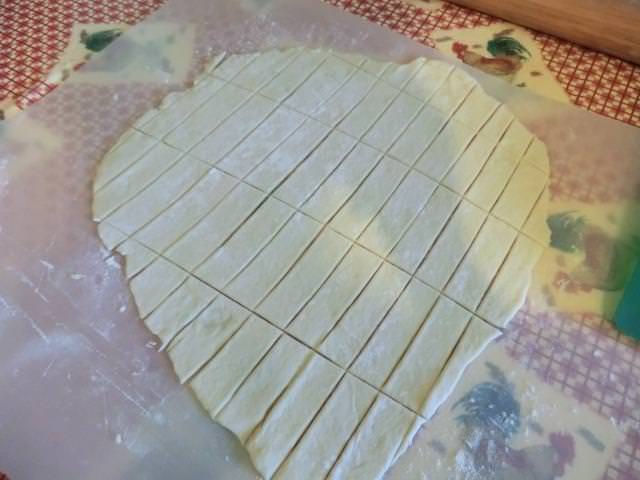 In a separate small saucepan, melt butter and whisk in flour. Cook over medium heat for a minute or so, stirring constantly to create a roux. Gradually add in about half a cup of stock at a time until you’ve thinned out the roux a bit.

Add roux mixture to the stock with the vegetables and whisk until no lumps remain. Add in the whipping cream and frozen peas.

Bring the stew to a light boil and add in the dumplings, one by one. Stir gently, cover and cook for 10 minutes or until dumplings are tender and done.

Take the pot off the heat and add the shredded chicken back in. Stir to heat the chicken through, TASTE for seasoning and add additional salt and pepper, if needed, then serve. 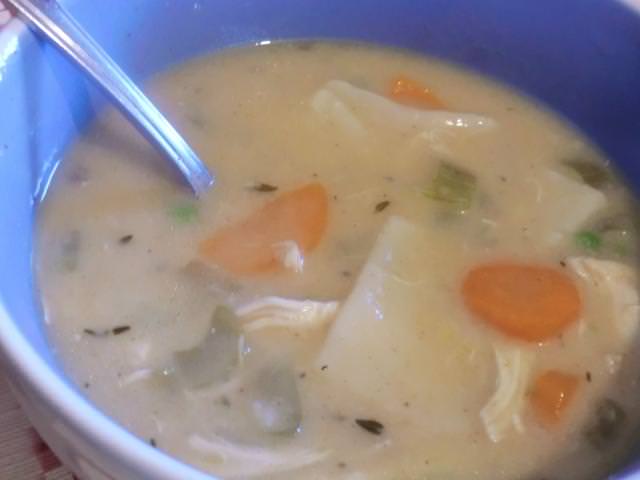 As I placed the cherry red dutch oven on the kitchen table for serving, I wished that my small family was gathered around, empty bowls and spoons in hand, ready to dig in.

15 thoughts on “Chicken and Dumplings … with Rolled Noodles (Trial #2)”