This is another reason that my freezer keeps filling up, in spite of my attempts to clean it out.

A local grocery store tempted me with a meat display refrigerator filled with vacuum packed boneless pork loins at a crazy cheap price. For $11 I brought home this vacuum packed beauty and stood there looking at it with a chef’s knife in hand. Oh, the possibilities.

In this picture, the ‘fatty’ end is on the right. 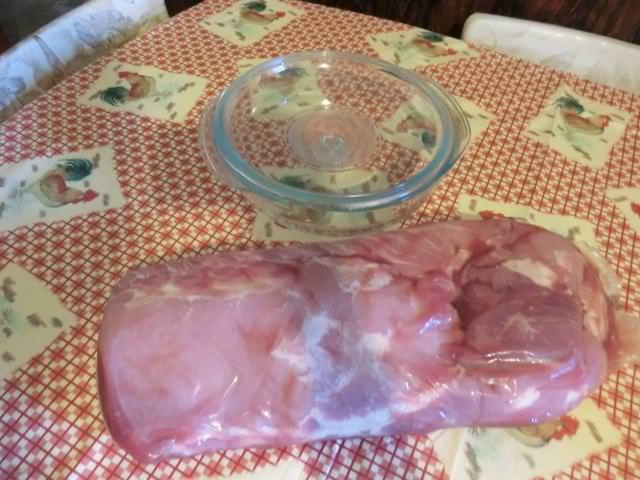 After cutting off and discarding the fat cap and removing as much silver skin as I could from the loin, I started at the ‘not so pretty’ fatty end and cut it off. I bagged and weighed it at about three pounds before freezing. I haven’t decided if I’m going to cut this piece into 2 1/2 inch wide strips to marinate for Chinese barbecued pork or turn it into pulled pork. Still, this left about two thirds of the loin to play with. I also removed the streaky ‘rib portion’ of the loin, about three finger widths in size, that you can see at the top of the picture above. It was set aside until I got to the end.

I moved to the other end of the loin and cut off two 1 1/4 inch portions for butterflying and then continued cutting until I got to a portion of the loin that transitioned in appearance between the pretty loin and the fatty end that I had already cut off. I ended up with a baker’s dozen (that’s thirteen, if you don’t know) 1/2 inch pork chops.

The rest of the pork, between the fatty end and the pretty loin end in appearance, along with the streaky ‘rib portion’ that I had set aside earlier, was cubed, bagged and frozen for pork stew. I ended up with a bit over one pound (500 gm) of meat. 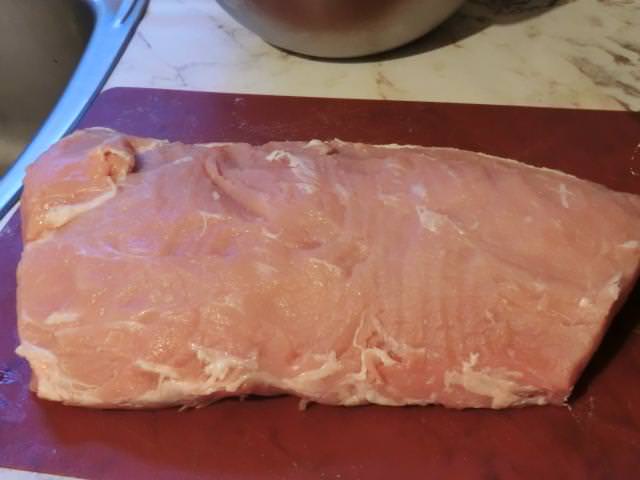 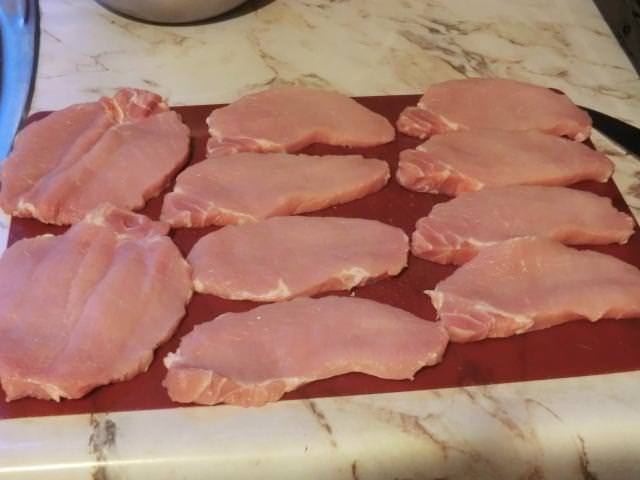 Butterflied pork chops before and after pounding and after seasoning 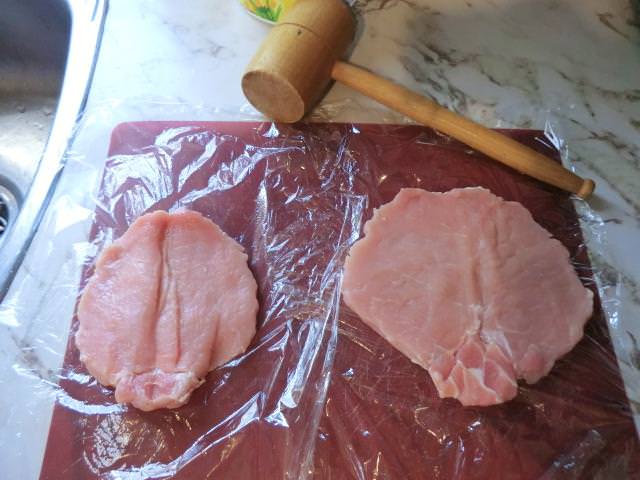 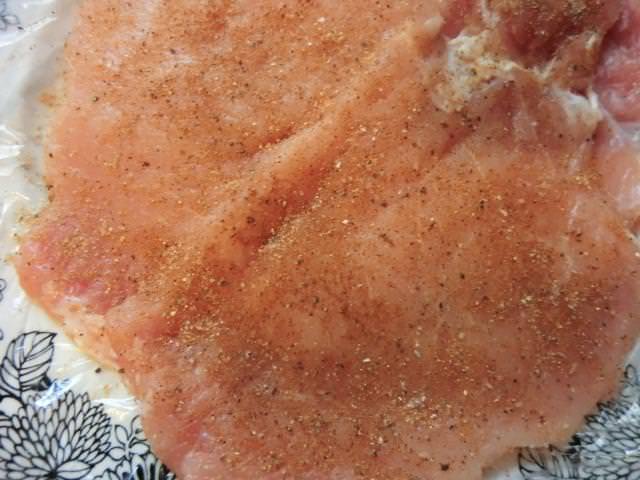 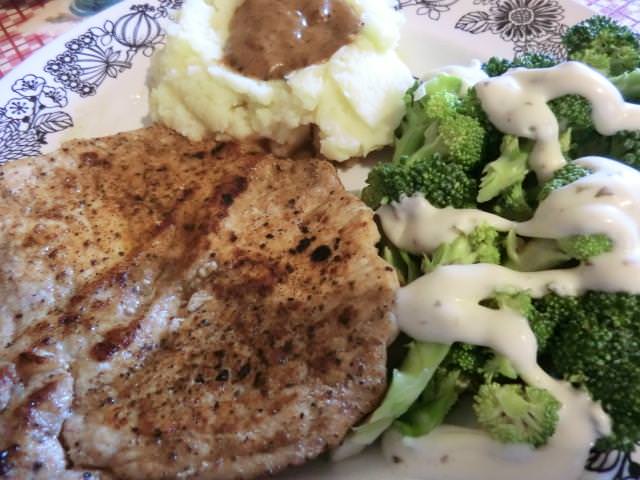 Trim off any excess fat from the chops and rub the spice mix on each side.

Heat 2 tablespoons olive oil over medium-high heat in a cast iron frying pan until it’s hot, then reduce heat to a bit under medium.

Carefully place the chops in the hot oil. Cook and brown approximately 1 minute per side.

When both sides are evenly browned, cut into the thickest part to make sure they are cooked thoroughly. Allow them to rest a minute or two then serve.

I used one of the boneless loin chops (about 2 oz each) to make two huge pork and shrimp udon noodle bowls. 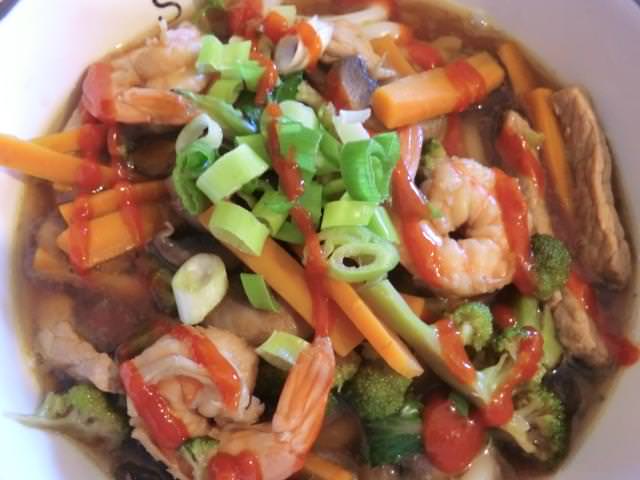 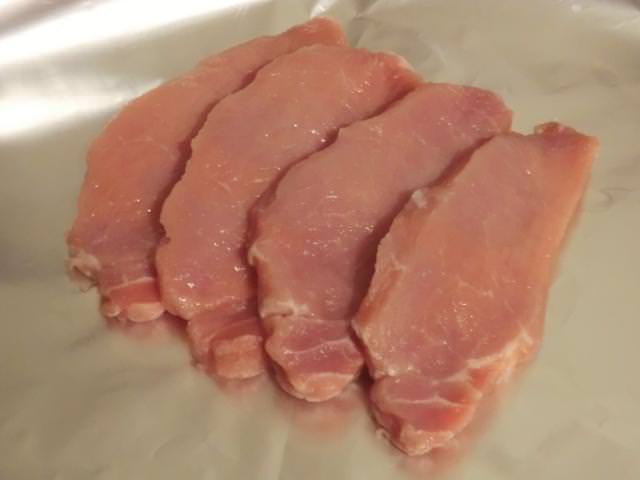 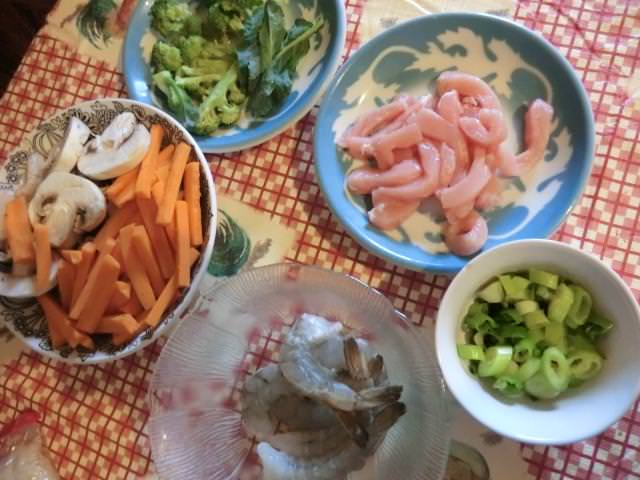 Cook noodles per package directions; drain and set aside.

Add garlic, red pepper flakes, and broth to a large saucepan; bring the broth to a boil. Lower heat, and simmer for 10 minutes to flavour the broth.

Combine soy sauce, sake, and honey in a small bowl; stir and set aside.

Add vegetable mixture to broth mixture. Stir in sliced pork, raw shrimp and broccoli leaves. Cook for 2 minutes or until the pork turns white and the shrimp turn pink. Taste the broth for seasoning level adding a bit more salt and some white pepper, if needed.

Divide cooked noodles among two bowls. Add half the soup mixture over each bowl of noodles.

NOTE: If, like me, you forgot to add the red pepper flakes to the broth, add some Sriracha sauce to your bowl of soup, stirring it into the broth. 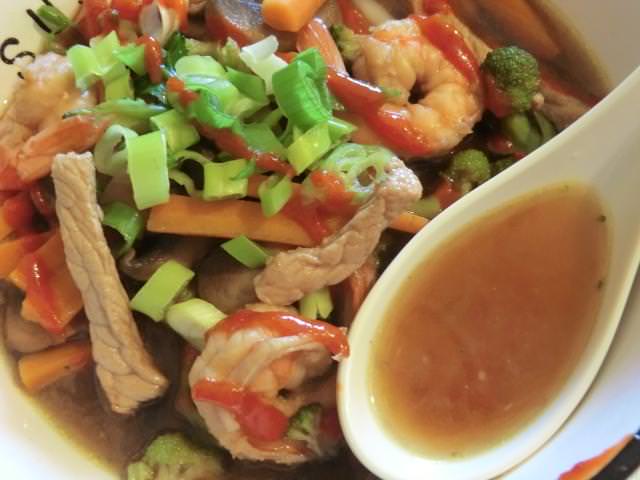