I recently saw a post on one of my bread making FB groups about making potato bread/buns … and I was intrigued.

So, this past long weekend, I went down into the basement for the last six Yukon gold potatoes that I had …

… only to have a second thought based on the presence of a LARGE sweet potato in the shoe caddy hanging at the top of the stairs into the basement.

Crumb of the sweet potato buns 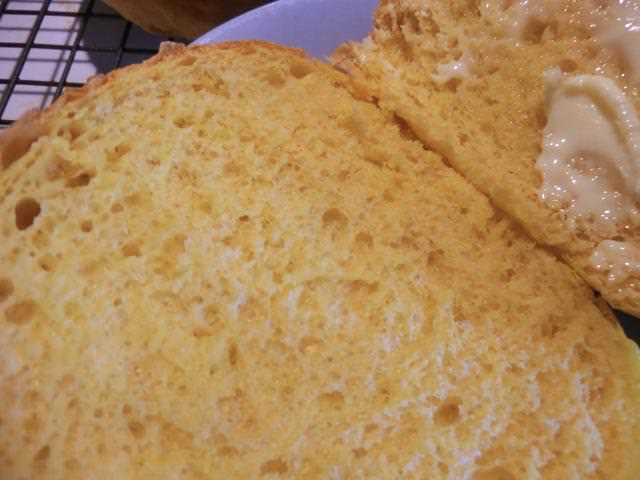 NOTE: On line recipes are sometimes a crap shoot when it comes to the detail of the instructions given, or lack thereof. In this particular case, the proofing times were way off. It took my dough one hour to rise to the top of the bowl NOT the two hours that the recipe claimed. Only the dinner plate covering the top of the bowl prevented a spill over. And my kitchen wasn’t even particularly warm … barely 72 deg F.

Based on that, I watched the final proofing time carefully. It took half an hour for the buns to have doubled in size. Since I had something else in the oven already, I threw the baking tray with the buns into the fridge until I was ready to bake them. 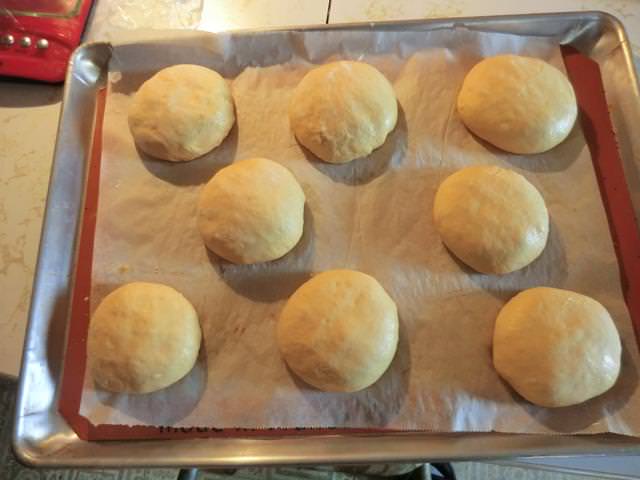 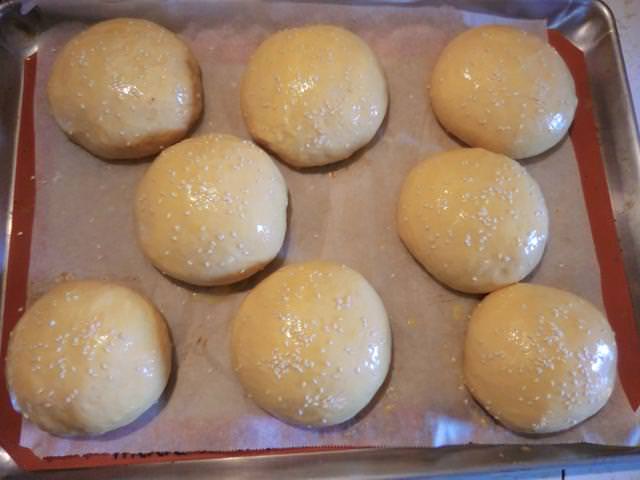 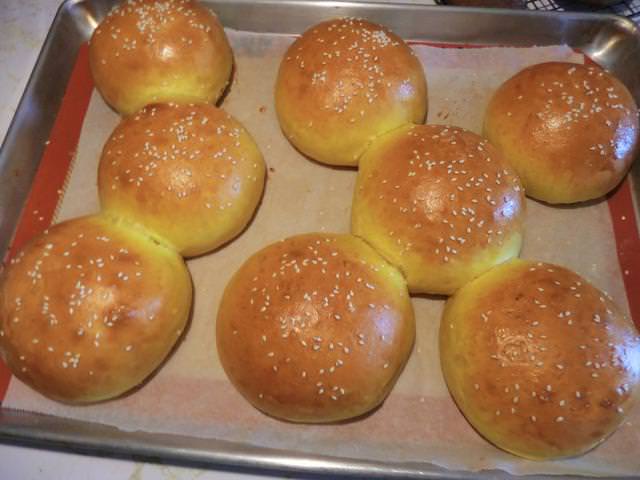 Looks like ‘someone’ was nibbling on that warm buttered bun. 🙂 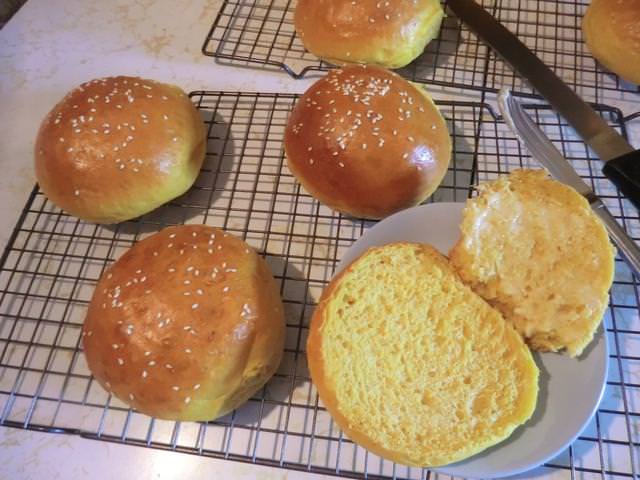 REVIEW: Soft and tender buns with a bit of sweetness. Beautiful golden colour. The size though … well, when they said LARGE, they meant large. I used 115-120 gm of dough per bun. I’d scale that back to 95-100 gm next time which should give me ten buns and not the eight I ended up with. And I’d definitely make this recipe again.

Here’s another case of a recipe that didn’t QUITE work as expected.

Mocha cookies sounded pretty amazing when I ran across them on a recent web search. And the pictures made my mouth water. I followed the instructions carefully. Butter at room temperature. I even weighed it. Egg at room temperature. And I have a light and consistent hand when measuring flour. My oven is calibrated properly and it was preheated long enough that I knew it was accurate. I was surprised that the recipe said it only made FOURTEEN cookies but used a soup spoon to measure out the dough. The resulting balls were about two inches in diameter so I decided to scale them back to one inch in diameter, made the fourteen cookie balls and prepared to watch the timing so they wouldn’t burn. 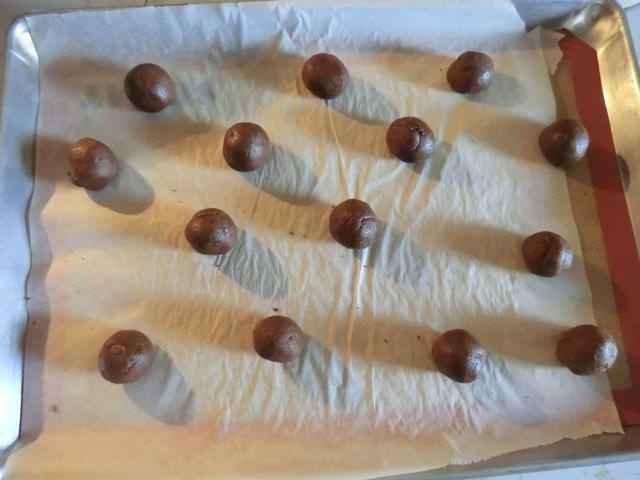 I ended up with little marbles.

They didn’t spread AT ALL even after I gave them an extra couple of minutes of baking time. 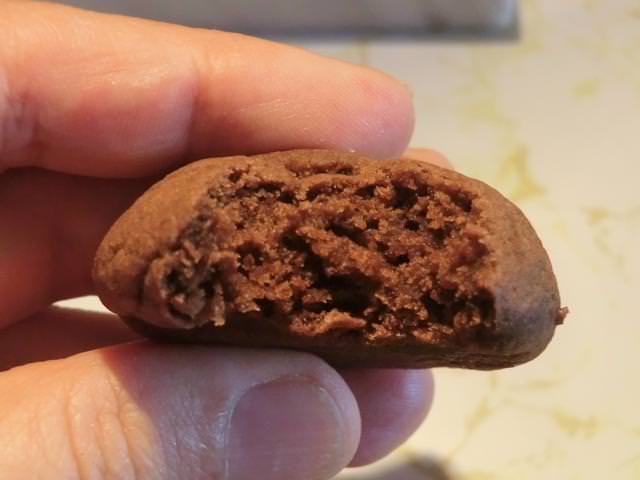 I still had a bit over half the cookie dough left so I weighed it, and divided the dough into EIGHT (46 gm) portions. The first batch of cookie balls had all sorts of cracks and imperfections after they baked so I made sure that these cookied balls were perfectly smooth, pre-baking. I took a good look at the dough balls before I put them in the oven and they looked HUGE. Since I didn’t want GIANT marbles, I decided to dip the base of a coffee mug into granulated sugar and flatten the dough balls. 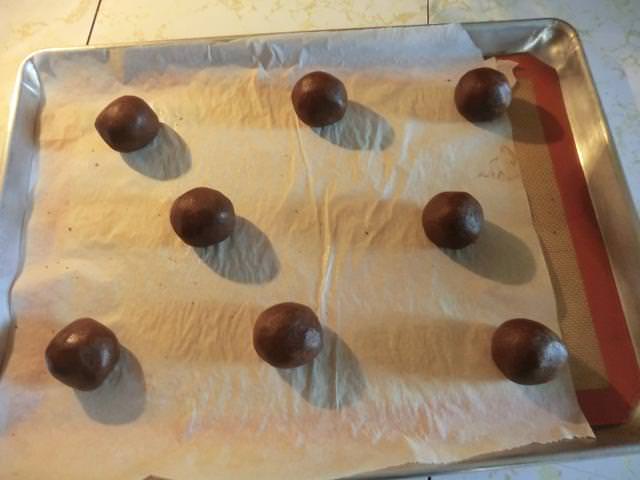 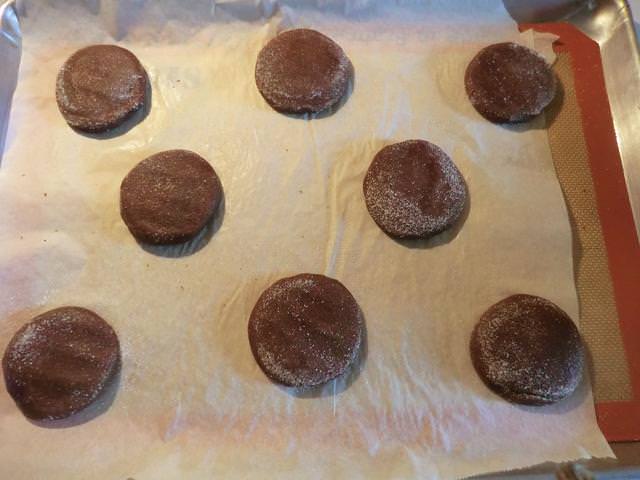 NOTE: For some reason I didn’t think to increase the baking temperature from the 350 deg Fahrenheit in the recipe to 375 deg for this second batch. 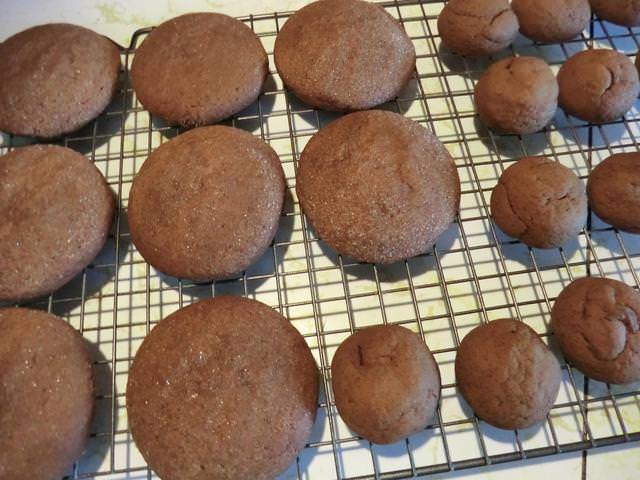 REVIEW: The cookies were tasty though I think they were missing … something … taste-wise. I don’t think I’d make this recipe again.