A recent request by someone on one of my FB groups for a thin crust pizza recipe got me thinking.

I’ve made a delicious thin crust pizza using sourdough tortillas as a base but, was it possible to use the sourdough starter directly to get similar results?

I used the Genius Kitchen recipe, with some minor adjustments posted below, for my first attempt. 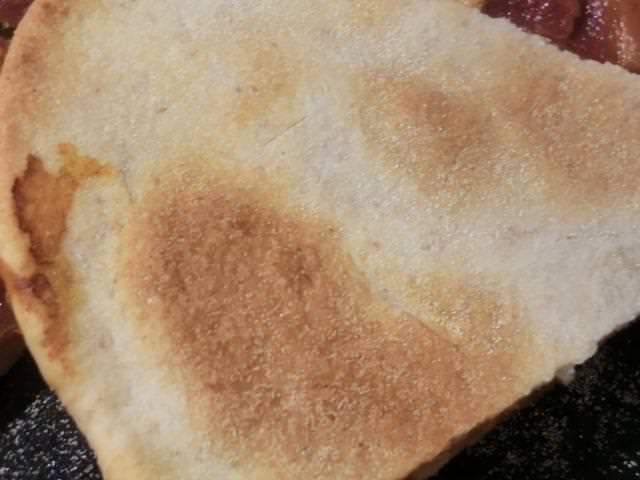 * If possible, make sure your starter has been freshly fed, 2-4 times if possible, before using it, if you’re keeping it in the fridge, like I am.
** Start with one cup of the flour if your starter is on the thick side 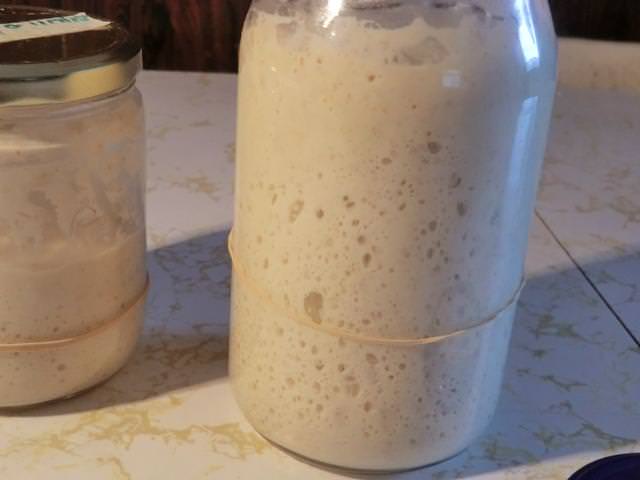 Preheat the oven to 500 degrees Fahrenheit.

In a large bowl, mix together one cup of flour and the salt. Add the sourdough starter and the EVOO and stir together until it forms a homogeneous mixture. Gradually stir in more flour, as needed until the mixture starts to gather into a ball. Transfer onto a very lightly floured work surface and knead until you get a pizza dough consistency.

Cover your ball of dough with the bowl you used to make it in and let rest for 30 minutes, so it will be easier to roll out. (It won’t rise much, if at all, but will get a bit softer.)
Roll the dough out into a circle using the minimum amount of flour needed to prevent sticking. 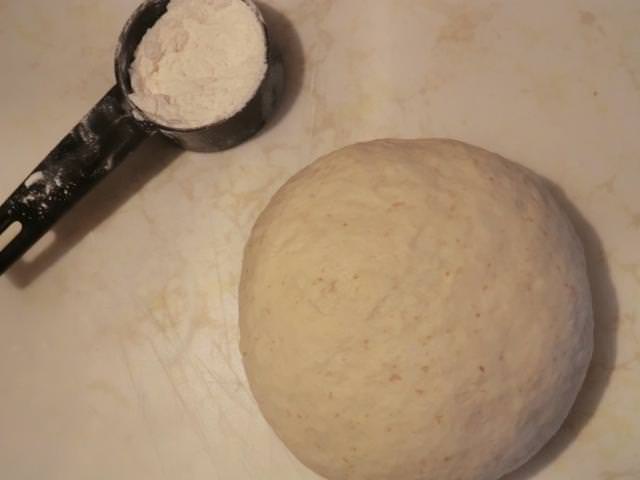 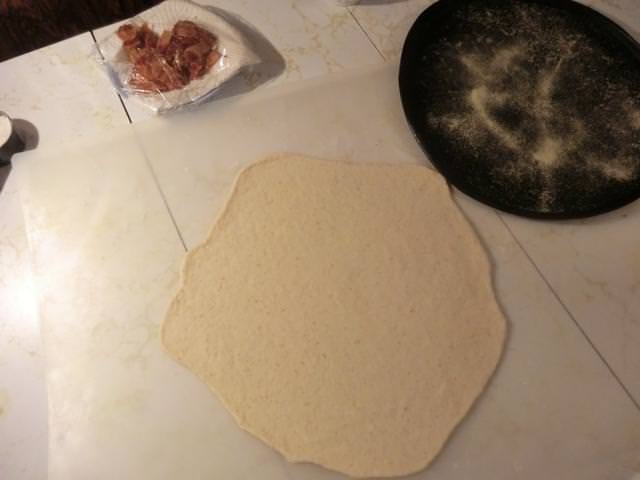 Brush with extra virgin olive oil and use the tines of a fork to dock (prick all over the dough) to prevent excess bubbling up of the crust during prebaking. 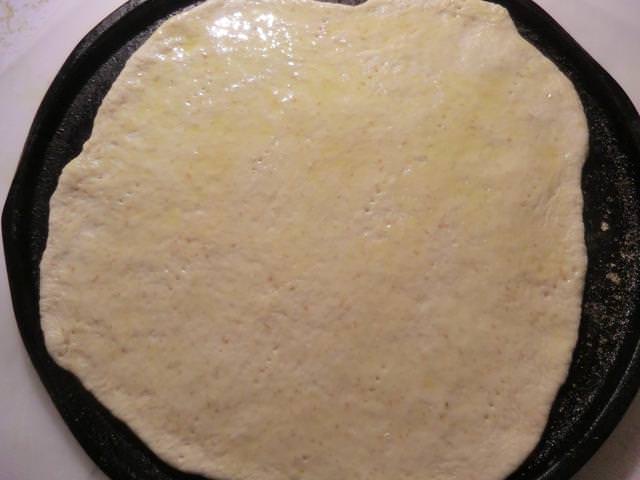 Bake the crust for 5-7 minutes, depending on your oven’s performance. (I decided to pull the crust out after 5 min.) 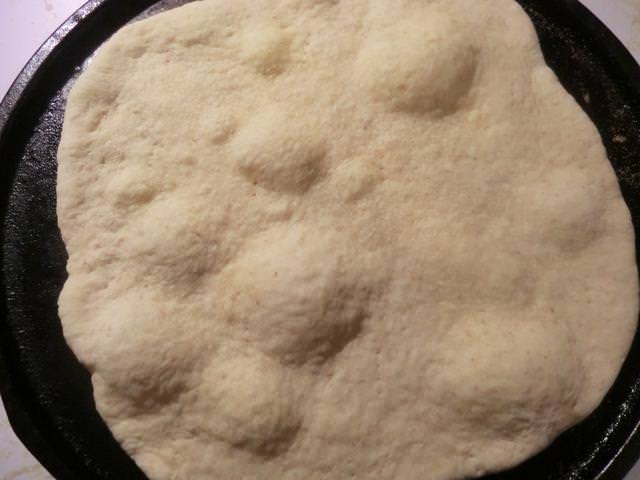 Remove the crust from the oven and brush on a bit more oil to prevent the toppings from soaking into the crust and making it soggy.

Add the desired toppings and bake the pizza until the crust browns on the top and underside, and the cheese melts, ~10 minutes. 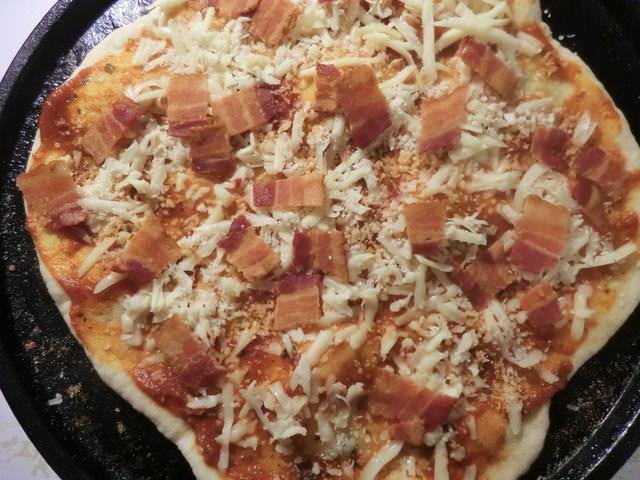 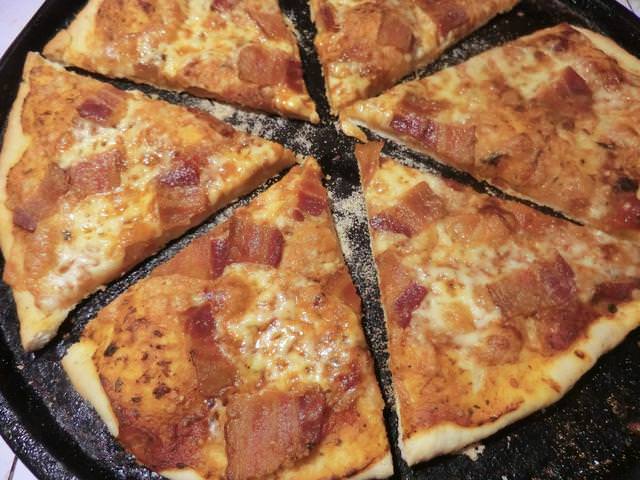 REVIEW: The dough was very tasty. I fed my starter with a few tablespoons of whole wheat flour early on in rehydrating it from dry, so the texture was nice and chewy. The dough could have been rolled out a bit thinner but the amount of dough used (260 gm) was pretty much spot on. I didn’t get dark brown spots on the edge of the crust, like in a wood burning pizza oven, but it was crispy enough on the underside for my taste, even without a pizza stone or preheat the baking sheet, a cheap black pan that’s more than 30 yrs old.

The second half of the pizza dough was baked without prebaking. The result: The crust was NOT as crispy without prebaking. Perhaps because the toppings were fully cooked after 10 minutes so the total baking time was only 10 minutes compared with the 15 minutes total for the prebaked crust. And, even though it was expected that baking the pizza with the toppings on (without prebaking or docking) would prevent the formation of bubbles, that was not the case. Four large bubbles developed during the 10 minute baking period. They deflated somewhat once the pizza was removed but did not disappear completely. 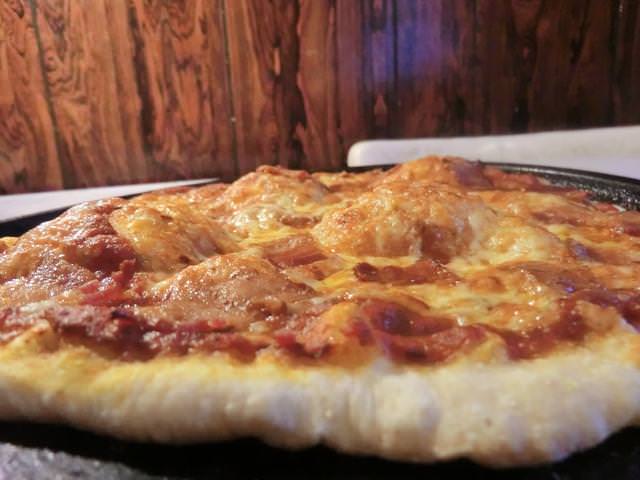