I remember my mom making a lot of stews when I was growing up because she could use ‘filler’ vegetables, especially potatoes, to stretch a small amount of meat to feed a hungry family of four, with lots of leftovers. Tocană was the word she used instead of stew, however, because, like many immigrants, she interspersed her English with a lot of Romanian words. I was never quite sure what they meant, and, sadly, didn’t always ask, but I managed to figure out the meaning of most of the words, in the context in which they were used.

PS: ‘Zamaă (zeamă)‘ was another tricky Romanian word, which meant ‘soup’, but seemed stew-like to me. Amusingly, in later years, the word ‘soupă’ became part of our family lexicon. And then there were ‘ciorbă’ and ‘bors’ which are types of soups. I may go into that in a future post.

When my brother married a Canadian-born Hungarian girl, she brought other food words into our conversations. Some were very familiar. Like ‘tokány’ which was similar enough to the Romanian word for a stew. But ‘porkolt‘ also refers to a stew. As does ‘paprikash’.

Porkolt, paprikash, and tokany … makes your head spin, doesn’t it? And then there’s ‘goulash’ which can be a soup OR a stew. But I won’t get into that in this post.

Romanian cooking terms almost seem easy in comparison. At least to me, they do.

Romanian pork stew with cornmeal mush and a fried egg 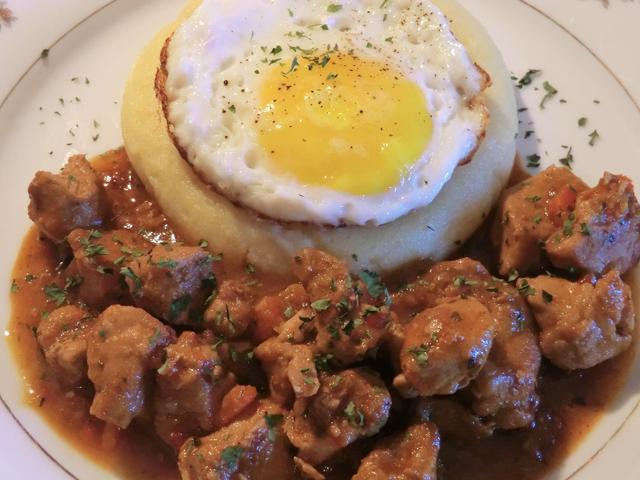 In my recent internet searches, I’ve learned that tocană ‘usually’ refers to a mutton/lamb stew. But my mom has never liked mutton so her tocană was usually made with pork, which seems to be the go-to Romanian meat. Beef was very rarely served at our house as it was not something my mom was that comfortable cooking, to be honest. (You do NOT want to know how she cooked a frozen t-bone steak.)

Anyway, getting back to the tocană, I debated on making a chicken (pui/gaina refering to a chicken/hen) or even a mushroom stew, but I settled for what I felt most comfortable cooking … a pork stew or ‘tocană cu carne de porc’.

One final language aside. Tocană is what you get in a restaurant. Tocăniță (the diminutive form, like saying ‘little tocană’)  is what your mom makes at home … with love. 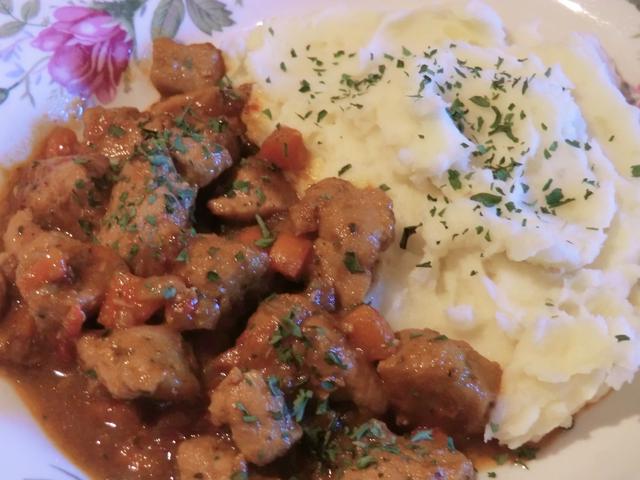 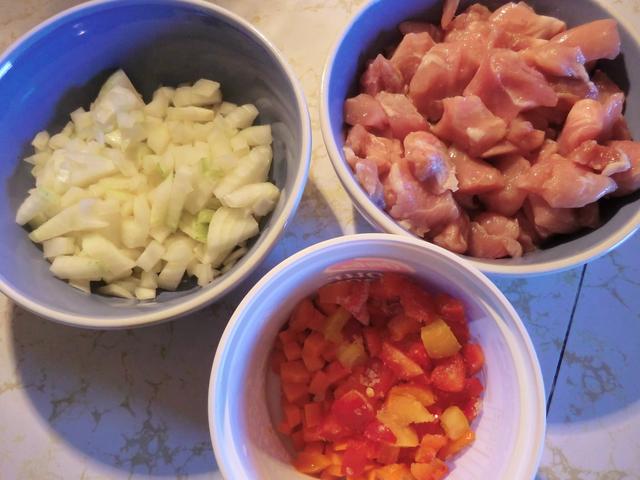 * As my pork loin was pretty lean, I added about 2 tbsp of finely chopped pork fat trimmed from a pork shoulder, after I had seared it for red chile pulled pork

** This dish was often made in the winter when fresh vegetables weren’t available. Frugal housewives would dry and coarsely grind up various vegetables and use them in their soups and stews. If you have access to a dry vegetable soup mix, use 1-2 tsp, I used the carrots and sweet peppers instead.

In a dutch oven, over medium-high heat, render the fat and use it to fry the pork, for about 10 minutes or until it starts to brown. Remove the meat to a bowl and reserve.

Reduce the heat to medium, add the onion and cook until it softens, about 10 minutes. Add the carrots and sweet peppers and the garlic and cook for a few more minutes. Add the thyme, sweet pepper paste and the hot pepper paste and stir into the vegetables. Cook for another minute or so to cook the ‘raw’ taste out of the spices and liven up the herbs.

Add the chicken stock and use it to scrape up the fond (browned bits of flavour) on the bottom of the dutch oven. Add the browned pork, salt and pepper and bring the mixture to a boil. Your meat and vegetables should be just barely covered by liquid. If needed add up to a cup of water, cover with the lid and cook for about 30 minutes at medium heat. Check the meat for tenderness. It should fall apart and the mixture should not be dry but there should be a ‘sauce’ surrounding the meat and vegetables. If needed add some more water and continue cooking the pork with the lid on.

If using potatoes, add the cubed potatoes at this point, another cup of water or as needed to cover the potatoes, and about 1/2 tsp more salt, put the lid back on and cook for an additional 30 minutes. Taste for seasoning. If you like a bit more heat, add more hot pepper paste. 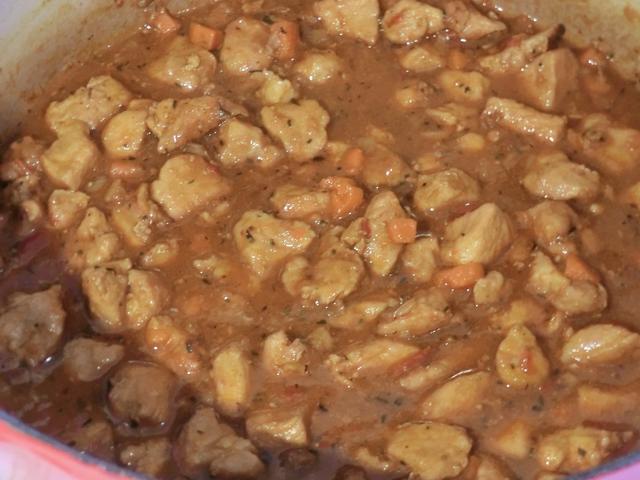 When ready, sprinkle fresh chopped parsley over the top of the stew.

Serve with cornmeal mush/polenta or mashed potatoes (mamaligă sau piure de cartofi) if not using potatoes in the stew. Slices of a crusty bread are a tasty accompaniment to sop up any extra juices. 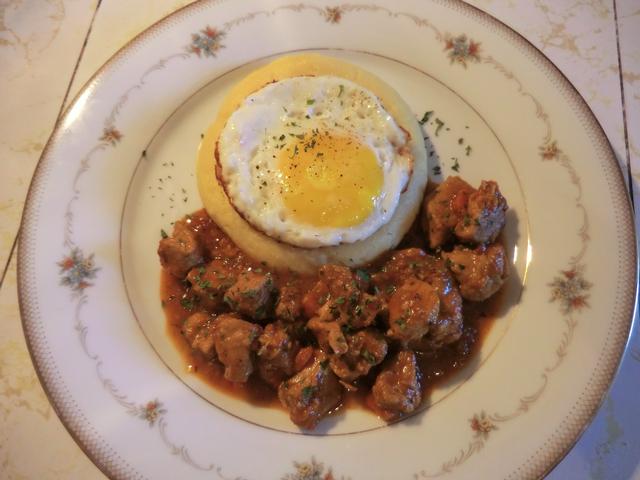 For a one bowl meal, stir diced boiled potatoes into your finished pork stew. This gives you the option of serving the stew itself in various ways and stew without the potatoes freeze better as the thawed potatoes don’t get too mealy. 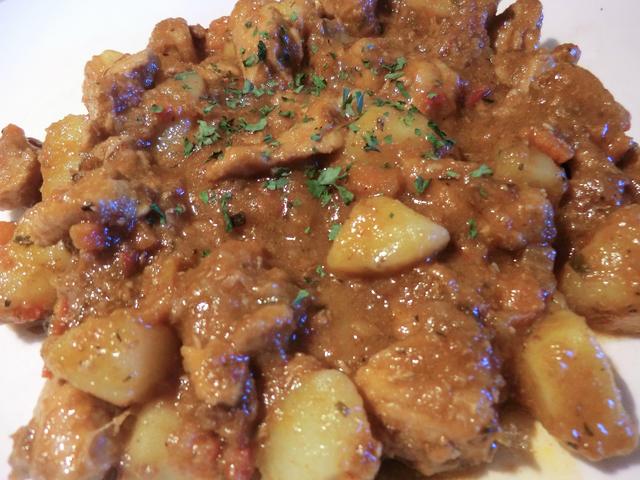